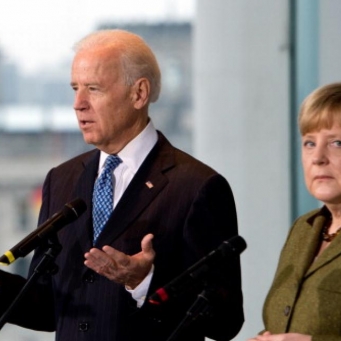 Although it is not the time that the spying activities of the US National Security Agency (NCI) on the European allies of the United States have been revealed, the European community, with its various sects, especially the political and popular, has been living since yesterday evening, Sunday, on The “major espionage scandal” of the agency, which was revealed by the official Danish media, was shocked. The shock stems not only from the names of political figures in Europe from the first row, whom the agency continued to spy on in 2012 and 2014 (that is, during the era of former US President Barack Obama), led by German Chancellor Angela Merkel, but also from the cooperation provided by the Danish intelligence to its counterpart This would have important repercussions within the European Union.

The United States spied on the names of political figures in Europe from the first row, led by Merkel

The spying operation included the German chancellor, French and German politicians and parliamentarians, and others from Norway and Sweden. The disclosure came, yesterday evening, Sunday, as part of a press investigation by the Danish public broadcaster “DR”, in cooperation with other European media, namely: the French newspaper “Le Monde”, the German newspaper “Süddeutsche Zaitung”, the German TV channels “NDR” and WDR, Norwegian public broadcaster NRK, and Swedish television SVT.
In the details that emerged from the so-called “comprehensive espionage scandal”, it appears that the Americans, through the “NCI” agency, had led a secret operation under the code name “Operation Dunhammer”, benefiting greatly from their cooperation with the Danish military intelligence service “FN”. E, who is entrusted with espionage and external work, in order to carry out a comprehensive espionage operation that includes Norway, Sweden, France and Germany.

Issues and people
pressure forced Denmark to change its policy in the women file and children “Daesh”
reveals the investigation, which for months took, according to media institutions to participate in it, that the agency “that the CIA” used Danish network communications, and programs belonging to the Danish military intelligence, to carry out eavesdropping He spied on Merkel (in her position as German chancellor since 2005), former German foreign minister (and German president since 2017) Frank-Walter Steinmeier, as well as the leader of the socialist opposition in Berlin, Peer Steinbrueck. Specialists in espionage operations considered that “the issue is not only that the espionage included the leaders of a neighboring country (of Denmark) such as Germany, but also included the top in the German political community, which will certainly create a problem for Denmark in Europe,” according to the professor at the University of Southern Denmark, who specializes in Intelligence work issues Thomas Friese.
The Danish dilemma is very clear, with the ruling center-left Defense Minister Trine Bramsen refusing to appear on Danish television, to comment on the United States’ use of Copenhagen and its communications cables as a spying platform for European allies. Bramsen contented himself with sending a brief message via e-mail to DR, explaining that her country “confirmed, during the era of former Prime Minister (Healy Thorning-Schmidt), that systematic wiretapping of allies is unacceptable, which I think is the same opinion of successive governments.” “The government cannot enter into speculation about any intelligence issues in the press, as these issues are discussed in the Parliament’s Special Committee (the Committee on Defense and Foreign Affairs),” Bramsen added.
The laws of the Danish Intelligence Community, which fall under the Ministries of Justice and Defense, prohibit the security services from spying on Western allies. This dilemma does not only concern the current Danish government, as the espionage operations that were recently revealed took place under the governments of the center-left (Healy Thorning-Schmidt period) and the center-right (headed by Lars Luka Rasmussen), meaning that it does not exclude any political camp from the two ruling camps.
Breach of sovereignty and undermining of trust
In practice, what was revealed by the joint investigation of European media organizations, adds something to what was leaked during previous years that the US agency spied on Merkel during the Obama era, as it became clear that the comprehensiveness of the “Denhammer” operation was broader, and reached Paris, Stockholm and Oslo, and with the knowledge of the intelligence service The Danish military, and even presenting the so-called “Pearl of the Crown” in the work of the apparatus, to spy on Russia and China, and to combat terrorist operations, to act as an American Trojan horse to gain access to politicians of various political trends in those countries, especially the socialist left camps in Sweden and Norway.

In 2013, the defector from the US agency, the refugee in Moscow, Edward Snowden, leaked a document confirming the existence of an American wiretap on the phone of German Chancellor Merkel. However, what is revealed today is that the espionage operation was broader and more comprehensive than I had previously thought, in terms of including leading figures in the world of politics, including the foreign minister of the German “Social Democratic Party” at the time (in 2013, Steinmeier, and the leader of the party that was competing That year on the chancellorship, Steinbrueck, who has Danish ancestry on his mother’s side). Merkel, after revealing that she was previously spying, had stressed that “espionage between friends should not happen.”
The sources involved in the new investigation into the role of Danish intelligence for the media organizations participating in the investigation confirm that the American operation continued even after the 2013 document was leaked, meaning that the espionage did not stop until 2015. Although the Danish security service conducted an internal investigation at the level of cooperation and exploitation However, according to nine sources on which the investigation relied, and after placing the results of the internal investigation (with the participation of experts in techniques to block the investigation from the Americans) on the command table of the military security apparatus, no Danish reaction or action took place. Until August 2020. Only then was “the head of the Military Intelligence Service dismissed” without providing an explanation to the local public about the reasons, which the DR journalistic investigation seems to be answering today.
Who are the “enemies”?

In practical terms, it is also clear that the US spying on European politicians through their telephone and online communications, “put everyone who communicated with them in the eavesdropping circle, including journalists, employees, ordinary citizens, activists and politicians from foreign countries, including opponents of their governments, which exposes them to prosecution,” according to Swedish Member of Parliament for the “Left” party, Jens Holm, who was included in the wiretapping with his party. Holm stressed that what he disclosed is a “violation of the sovereignty of Sweden and its people.” The Norwegian Socialist Left party expressed its shock at this process that included the party, considering, according to its president, Udon Lusbacka, that what was revealed represented “a dangerous matter that destroys confidence in the democratic system, and as long as it was revealed that Copenhagen participated in the issue of the spying of the American agency, it is necessary to establish Everything is on the table to find out everything that happened publicly in front of the parliament in Oslo.”
The danger of what was revealed, with the shock it caused, lies in the Americans’ use of communication channels and cables, bringing the Americans special equipment and using advanced Danish technologies, originally intended to “protect Denmark’s interests against enemies” (which is the official definition of the work of military intelligence in Copenhagen). Thus, Denmark has put itself in “the face of a European storm”, for the continuation of widespread espionage even after 2013 on most “flows via the Internet, land and cell phone lines, and access to sensitive companies”, according to what experts in security affairs told the Danish TV channel “D”. R”. The declared volume of espionage is the most comprehensive in the history of Denmark, especially since it even included following up on text messages in a way that made all those who communicated with the targets, who were eavesdropped, also a target for the US agency.
And it is difficult to understand Denmark’s interest in spying on Western allies, and this unfortunately undermines our political systems, said Pernilla Boi Kok, head of the research department at the Danish Center for Human Rights.

An expert at the Danish University of Odense, Professor of Social Sciences Jens Ringmouse, went on to consider that what was disclosed would put Denmark in a real dilemma in its relations with the targeted countries and Washington, and that it would “constitute a turning point around popular confidence in the world of security.”
In Berlin, a member of parliament for Merkel’s “Christian Democrat” party, Patrick Senborg, considered that “the disclosure is not surprising, as we conducted an investigation between 2014 and 2017 about foreign espionage on Germany, but that Europeans spy on each other, this is the new thing. “. Despite this, this German parliamentarian tried to stress that “the extent to which Denmark knew, and whether the espionage was carried out intentionally, with official knowledge, must be explicitly disclosed.”
A history of espionage
And if spying on Europeans is very embarrassing for Denmark, what causes more embarrassment for Danish Defense Minister Trine Bramsen is that the investigation also reveals spying on Danish citizens as well, including politicians, activists, and individuals with whom they communicated. Although the espionage operations until 2015 were not in Bramsen’s custody, the ruling center left today was also present and ruling in power during the period that witnessed the implementation of the “Denhamer” operation.
The operation at the time included wiretaps of citizens’ and politicians’ phones and correspondence, including e-mail and text messages.
The security and political dilemma in Denmark lies in the fact that the Americans benefited from the Danish intelligence project called “Pearl of the Crown”, which is an effective system in Russian-Chinese espionage and counterintelligence, and its work to repel the attempts of both sides to penetrate and spy on Danish industries, and its responsibility also to work on lands outside Denmark. under the pretext of combating the terrorist threat against the country.
The Danish military intelligence service recruited and worked on Syrian territory during the period of ISIS control, and employed citizens of Muslim origin who planted them in northern Syria in its project. Members of the security apparatus were traveling to southern Turkey to coordinate these operations and pay salaries to Danish agents, according to previous reports that revealed his foreign activities.
A former agent of the Israeli Mossad had revealed in his book from Canada “By Deception” by Victor Ostrowski, that “Danish intelligence opened the doors for the Mossad to spy on the Palestine Liberation Organization and the Palestinians during the period of (the late Palestinian leader) Yasser Arafat’s presence in Tunisia, and most of the phone calls were Others, with Tunisia, are monitored with Danish cooperation.”