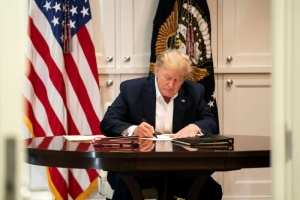 WASHINGTON – US President Donald Trump described from his hospital room the methods used to treat him as a “miracle from God”, stressing that he is in a better condition now, after a series of contradictory messages from the White House that caused ambiguity about his health.

Looking exhausted, Trump spoke in a four-minute video clip on his Twitter account on Saturday that he was feeling “much better.”

And the US President continued, while sitting at a round table wearing a jacket without a tie at the Walter Reed Military Medical Center, “A lot of things have happened, if you look at the treatments I receive, some of them and others coming, in fact they are miracles, miracles of God, people criticize me. When I say this, but we have some things going on that look like miracles from God. ”

Trump considered that the next few days will constitute a “real test” of his resilience while he is fighting the Corona virus in the hospital.

“I would like to tell you that I am in relatively good condition, and we will conduct the tests in a few days,” he said, expressing his gratitude for the sympathy and solidarity he received from Americans and world leaders.

The US President emphasized that he “had no other choice” regarding infection with the virus, noting that the only way to avoid this was by isolating himself in his office and not mixing with others or holding meetings, and he stressed that this is not possible for the head of the “most powerful country in the world.”

Trump revealed his wife Melania’s health status, stressing that her condition is good and her body deals with the disease better than her being younger, he said.

The speech came after hours of contradictory assessments by US administration officials, which gave an unclear picture of the president’s health status since his infection with the virus was discovered on Thursday evening.

On Saturday morning, the White House doctors’ team said the president was improving and he was already talking about his return to the White House. “I feel like I can get out of here today,” one of the doctors quoted Trump as saying.

Minutes earlier, White House Chief of Staff Mark Meadows gave a less optimistic assessment and told reporters that “the president’s vital signs have been very worrying over the past 24 hours and the next forty-eight hours will be crucial … We have not yet reached a clear path to recovery.”

Meadows, who made his first remarks on condition of anonymity, changed his tone hours later and told Reuters that Trump was “doing well” and that doctors were very happy with his vital signs. Meadows did not explain the reason for the contradiction in his comments. An adviser to Trump, who asked not to be named, said the president did not like Meadows’ first comments.

Trump was transferred to the “Walter Reed” center near Washington, Friday, nearly 17 hours after he was diagnosed with the disease. Administration officials said moving the president to the hospital was a precaution and that he would spend several days there.

A source briefed on the president’s condition said Trump needed extra oxygen before going to hospital. Another well-informed source said that the decision to transfer the president to a hospital came after he suffered from difficulty breathing and decreased oxygen levels.

Notified White House physician Sean B. Conley told reporters outside the hospital, Saturday, that Trump did not have difficulty breathing and was not in need of additional oxygen.

“The medical team and I am very happy about the improvement the president is making,” said Conley, but he declined to give a specific date for Trump’s discharge from hospital.

Conley issued a statement, on Saturday evening, in which he said that the president “has not passed the danger yet,” but made it clear that the medical team felt cautiously optimistic.

“The scene today – doctors say one thing, White House sources say something else, and both sides have revised their statements later – and this only confirms that there are problems with the credibility of this administration,” said Kyle Condyck, a political analyst at the University of Virginia Center for Politics.

Campaign
announcing Trump’s injury is the latest setback for the Republican president, who trails Democratic rival Joe Biden in opinion polls ahead of the November 3 presidential election.

With Trump in hospital, his campaign announced that Vice President Mike Pence and Trump’s eldest sons, Donald Jr. and Eric, would be participating in campaigning activities starting Monday.

Democratic candidate Joe Biden, who largely avoided criticizing Trump during a campaign tour in Michigan, on Friday, spoke in a harsher tone, Saturday, even as he expressed his wishes for the president to recover.

Biden described Trump’s handling of the pandemic as preposterous.

And the former vice president took advantage of Trump’s infection with the virus to reinforce his calls for Americans to wear masks, a practice Trump doubted about its usefulness.

Treatments received by Trump
Conley said that Trump received the first dose of the anti-viral drug remdesivir produced by the US company Gilead Sciences and has proven that it reduces the stay of Corona patients in hospitals.

Conley added that Trump is also being treated with Regeneron, which is a combination of antibodies, along with zinc, vitamin D, famotidine, melatonin and aspirin.

The risk of the virus is severe for Trump, 74, due to his age and because he is overweight. Trump has remained in good health during his presidency, but he is not known to exercise regularly or follow a healthy diet.

A number of prominent figures in the Republican Party have been infected with the virus since Trump was announced, including Senators Mike Lee, Tom Tillis and Ron Johnson, as well as former White House adviser Cillian Conway and former New Jersey Governor Chris Christie.