A picture of former US President Barack Obama was leaked in 2005, three years before his first term as US president.

The picture brought together Obama, Louis Farrakhan, the controversial leader of the Nation of Islam, who is described as “hardliner” and has strange beliefs about the fundamentals of Islam.

The organization is accused of racism and anti-Semitism, according to the newspaper “North Star News Today.”

The photo was taken by photographer Mohammed Asskia, who declined to be published for fear of Obama’s political life, who was then a member of the Illinois Senate.

Asquia said representatives of blacks in the US Congress had asked him not to publish the picture. Saying that the picture would have had a major impact on the results of the US presidential election in 2008.

Louis Farrakhan, 84, is a Jamaican, named Lewis Walcott, converted to Islam after being convinced of the ideas of Malcolm X and joined the Nation of Islam before he disagreed with X after the latter’s performance. Hajj, and his rejection of the ideas of the organization, which led to his death later.

The ideas of the Nation of Islam are based on the sanctification of blacks, the belief that they are the best, and that the angels are among them, while the devils have white skin.

According to the beliefs of the “Nation of Islam”, God is a person on earth, the founder of the organization “Wallace Vard,” which the followers of this organization must invoke in every prayer they perform. 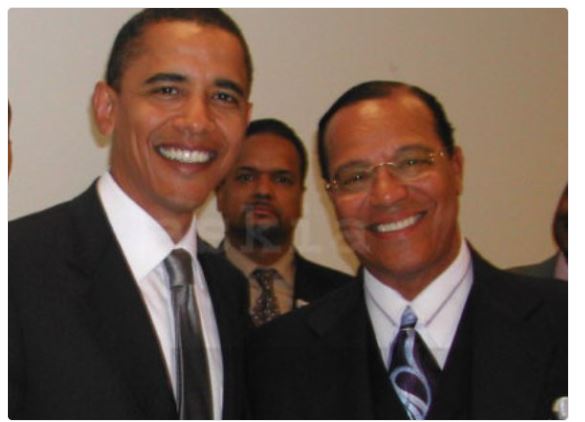