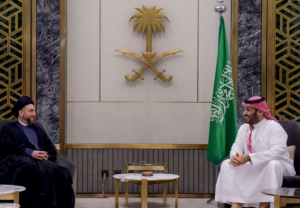 RIYADH – BAGHDAD – Informed Iraqi sources said that the leader of the Al-Hikma movement and the leader in the coordination framework, Ammar Al-Hakim, sought during his visit to Saudi Arabia to obtain assistance from Riyadh in putting pressure on the leader of the Sadrist movement, Muqtada Al-Sadr, to review his positions regarding the dissolution of parliament and the holding of elections, pointing out that it is not known exactly what It is the request that Al-Hakim brought to the Kingdom to put pressure on Al-Sadr and push him to participate in a national dialogue on Iranian dimensions. The extent of Saudi Arabia’s response to mediating an internal dispute over the way to manage the political crisis is not yet known.

Al-Hakim knows that obtaining a clear Saudi position from Al-Sadr or others is difficult, and Riyadh deals with caution with Iraqi internal files and does not want to appear to be on the side of this or that party, especially since the dispute is within one sect and is no more than a struggle over positions.

Al-Hakim said that he discussed with Saudi Crown Prince Mohammed bin Salman “the developments in the Iraqi arena.”

Al-Hakim added in a tweet to him on Twitter, “We stressed that dialogue between the various parties is the best way to reach satisfactory solutions to the current political impasse in Iraq, and we stressed that the solutions must remain Iraqi without any external pressures.”

The official Saudi Press Agency only said that during the meeting, “a review of Saudi-Iraqi relations, and a number of issues of common concern” took place.

The former Iraqi sources believe that the hidden goal of the visit is to show that Saudi Arabia does not mind opening channels of communication with Iran in Iraq, and that it can receive its representatives, cooperate with it and recognize it as a fait accompli, which means that it will give up what was previously talked about about building a relationship with the current The Shiite who tends to support the Arab depth of Iraq, which is represented by Muqtada al-Sadr.

The same sources believe that the visit aims to drive a wedge between Saudi Arabia and Al-Sadr more than to search for mediation or request Saudi pressure on him, at a time when the relationship of the leader of the Sadrist movement in Riyadh does not exceed more than a lightning visit that carried signs of a mutual desire to expand communication channels without being This has an impact on cooperation between the two parties, or Saudi Arabia’s standing behind al-Sadr and its strict rejection of any agreement with Iran’s current in parliament or the government.

Al-Sadr had visited Saudi Arabia, and met Prince Muhammad bin Salman, and the visit was read as a remarkable Saudi penetration of the Iraqi scene, and that the Shiites began to open up to the Arab depth and liberate themselves from the grip of Iran, albeit gradually.

The coordination framework’s resort to Saudi Arabia was met with disdain from the Sadrist movement. Saleh Muhammad al-Iraqi, who is nicknamed “Minister of al-Sadr,” said, “It is remarkable that one of them went to the sisterly Kingdom of Saudi Arabia a few hours after the end of the national dialogue session, and if we were the perpetrators, they would have said: The dialogue session was under pressure from abroad and a notice from the normalizers and the Americans. And the like.”

The visit aims to drive the wedge between Riyadh and Al-Sadr, rather than seeking mediation or requesting Saudi pressure on him

Al-Iraqi called on the opponents of the Sadrist movement to show morals and honor the rivalry, and to stay away from accusations and skepticism, and the accusations were made haphazardly.

The Sadrist movement demands the dissolution of Parliament and the holding of early legislative elections, while the coordination framework wants to hold these elections, but with conditions, calling for the formation of a government before holding early elections. Since August 12, supporters of the coordination framework have also held a sit-in on a road leading to the fortified Green Zone in Baghdad.

On Thursday, the Sadrist movement announced its rejection of the results of a meeting of the national dialogue held on Wednesday, saying that it “does not get fat and does not sing from hunger,” and accused most of the attendees of seeking to “stay in the chair.”

The Sadrist movement was absent from this session called by Prime Minister Mustafa Al-Kazemi and attended by leaders of political forces to search for a solution to a political crisis that has been going on for more than ten months, which prevented the formation of a new government.

The meeting came out with five points, most notably: calling on the Sadrist movement to engage in dialogue to set mechanisms for a comprehensive solution, agreeing to continue dialogue to lay down a legal and constitutional road map to address the current crisis, and stopping all forms of field, media or political escalation.

On Friday, a preacher close to al-Sadr attacked the results of this meeting, describing them as “worthless and we do not value them.”

Al-Khatib Muhannad al-Moussawi told thousands of al-Sadr’s followers during the Friday prayer sermon at their sit-in in front of the parliament headquarters, “The political dialogues that you hold are not for the benefit of the people or the country, but are for your survival and have no value and we do not value them.” He added, “The Iraqi people are the ones who decide their fate, and they are the source of the authorities, and the people’s exit today is against corruption and those who do not respect the people and the state, not against the state.”