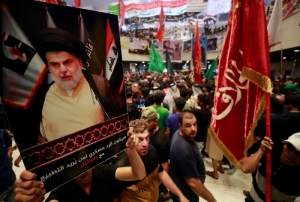 It is difficult to predict the regional dimensions of the Iraqi event, which is to prevent Iran from continuing to lay hands on the country entirely. However, the difficulty of predicting such dimensions does not prevent us from asking a set of questions that lead to a very important transformation in the region through what happened to the Iranian role in Iraq.

Above all, it cannot be ignored that the Iraqi Shiite leader Muqtada al-Sadr was able to block an Iranian coup attempt led by former Prime Minister Nuri al-Maliki and with direct support from the Iranian Revolutionary Guards.

The attempt was aimed at seizing the position of the prime minister in Iraq by making the parliament name Muhammad Shia al-Sudani, a front for Nuri al-Maliki, tasked with forming a new government. What was clearly required was for Al-Sudani to replace Mustafa Al-Kazemi, who is currently heading a government that was originally formed on May 7, 2020, and has been in charge of business since the October elections.

◙ Iran’s return to indirect negotiations with the American side regarding its nuclear program in Vienna can be included as evidence of a noticeable change in its position.

It was remarkable that Al-Maliki, one of Iran’s main men in Iraq and one of the promoters of its influence in Baghdad, sought to push for a session of the House of Representatives in order to replace Al-Sudani with Al-Kazemi. He tried to take advantage, to the utmost and at record speed, of Moqtada al-Sadr, the owner of the largest parliamentary bloc that emerged from the recent elections, pushing his 73 deputies to resign.

The parliament session, which would have inevitably led to assigning Al-Sudani to form the government, did not take place. Muqtada al-Sadr responded to his absence from the House of Representatives, as a result of the resignation of members of his bloc from him, by invading and disrupting the parliament. He practically carried out a coup against the coup, which was not far from the commander of the “Quds Force” Ismail Qaani, nor was the Iraqi judiciary represented by the head of the Supreme Judicial Council, Faiq Zaidan.

Al-Maliki’s failure to get rid of Al-Kazemi was nothing but a failure for the “Islamic Republic.” In the end, Al-Kazemi exercises his role as prime minister, even though his government is in the process of resigning. This is confirmed by his representation of Iraq at the summit that took place in Jeddah during President Joe Yeiden’s visit to the Kingdom of Saudi Arabia. The leaders of the six Gulf Cooperation Council or their representatives participated in that summit, in addition to King Abdullah II and President Abdel Fattah al-Sisi. This further confirms the role played by the Iraqi Prime Minister in facilitating the Saudi-Iranian meetings that take place from time to time in Baghdad, and these meetings could one day bear fruit.

The Iraqi events revealed a clear decline in the Iranian role in Iraq. The commander of the Quds Force of the Iranian Revolutionary Guards came to the Iraqi capital urgently to pick up the situation and secure some kind of cohesion within the coordinating framework that includes the allies of the Islamic Republic. It failed. The coordinating framework continued to witness internal strife, which indicates that Ismail Qaani is not in the strength of his predecessor, Qassem Soleimani, who had the first and last word in Iraq.

This revealed Iranian weakness on the one hand and the great loss suffered by the “Islamic Republic” on the other hand, in light of Donald Trump’s administration’s liquidation of Qassem Soleimani while leaving Baghdad airport in early 2020. Soleimani was accompanied by Abu Mahdi Al-Muhandis, deputy commander of the “Popular Mobilization” in Iraq, It is a gathering of pro-Iranian militias in Iraq. The absence of Abu Mahdi al-Muhandis appears to be another great loss for Iran in Iraq.

From Iraq, the second launch of the Iranian expansionist project in the region was after the administration of George Bush Jr. handed the country over to the “Islamic Republic” on a silver platter in the spring of 2003. Iran launched from its strong position in Iraq to dominate the Syrian decision-making. This was demonstrated by the assassination of Rafik Hariri in Lebanon, with coverage from Damascus, as Hariri was a Lebanese and Arab figure whose size exceeded the small country to its Arab surroundings to reach the decision-making centers in the world.

From Iraq, too, Iran began to act as the guardian of the neighboring country from a sectarian standpoint. It was able to change the nature of several Iraqi regions and did the same thing later in Syria, after it was able to fill the security and political vacuum left by the exit of the Syrian army from Lebanon in April-April 2005.

What is remarkable now is that Iran is not only retreating in Iraq. Its return to indirect negotiations with the US side regarding its nuclear program in Vienna can be included as evidence of a noticeable change in its position. This change reflects her acceptance of negotiation, even though she knows in advance that the Revolutionary Guards have not been removed from the US terrorism list. There is an American adherence to this position. Until a short time ago, this was not acceptable to Iran.

Indirect negotiations with America are not the only place where Iran has made concessions, regardless of whether the “Guide” Ali Khamenei will eventually allow a deal with the “Great Satan. We can also talk about concessions in Yemen, where the Houthis, in light of Omani insistence, accepted the extension of the truce in force since last April for an additional two months. This comes in light of a clear American desire for this extension to take place for a longer period in order to open the doors to a political settlement. Iran allowed the Houthis, who no longer had an appetite for fighting, for a two-month truce and kept the Yemeni political settlement paper in its pocket. But there is no doubt that it made a concession similar to the escalation practiced by “Hezbollah” through the marches it sent in the direction of the Israeli gas field Karish… Then it later retracted and agreed to the entry of the Lebanese government into indirect negotiations to demarcate the border with Israel in Naqoura… with American mediation.

Iran is no longer what it was in Iraq. Iraq was a major source of its power in the entire region. Only the next few days and weeks will tell us about the extent of the Iranian expansionist project in the region and its dimensions in light of the developments in Iraq.