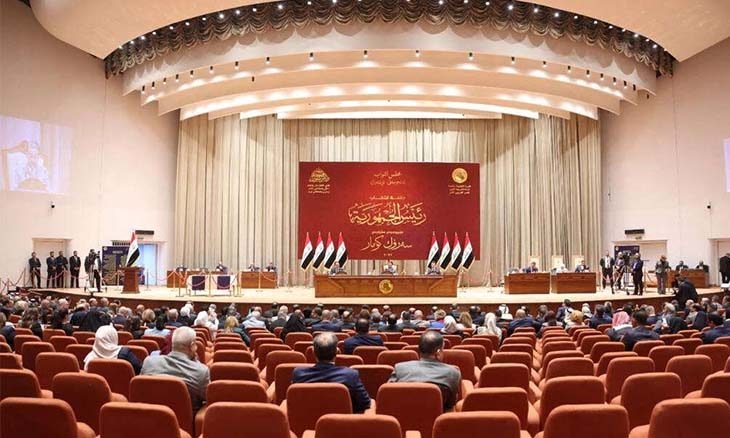 More than a year after the early elections that took place on the tenth of October 2021, the knot of the President of the Republic was untied at the last moment, the knot created by the insistence of the Kurdistan Democratic Parties and the Patriotic Union of Kurdistan, on their candidates for the post of President of the Republic, where the Democratic Party agreed with an alliance Some parties to the “State Administration” have withdrawn his candidate in exchange for supporting the candidacy of Dr. Abdul Latif Jamal Rashid, although the latter is already a leader in the National Union, and he had previously been a chronic minister of the Ministry of Water Resources, a candidate for the Union in the interim government formed by Iyad Allawi in the year 2004, then in the transitional government formed by Ibrahim al-Jaafari in 2005, then in the first government of Nuri al-Maliki in 2006, but this time he ran as an independent and was not the party’s official candidate.
But undoing this knot had a moral price this time as well; The Patriotic Union of Kurdistan was an ally of the coordination framework during the past year, and even its candidate, Dr. Barham Salih, President of the Republic, was the one who submitted a request to interpret Article 70 / first of the constitution to the Federal Court, a request that allowed the coordination framework to obtain an interpretation from the Federal Court that it be a quorum The election of the President of the Republic two-thirds, which allowed the coordination framework to guarantee the blocking third, which impeded the project of the Sadrist movement’s alliance to form his government with his allies in “Save the Homeland”, and then practically led to the resignation of the Sadrist movement’s representatives from Parliament, but some parties to the coordination framework “abandoned” their ally The former and his candidate in order to pass their candidate for the post of Prime Minister!
This scenario was a repetition of the scenario of 2018, as there was an agreement between the Al-Binaa Alliance and the Kurdistan Democratic Party to support their candidate Fouad Hussein for the post of President of the Republic, but “parties” in the Al-Bina Alliance, specifically the State of Law, Asa’ib and the Sunni Identities Alliance, turned against this agreement and voted for a candidate. National Union Barham Salih then!
The irony here is that the “state administration” coalition announced on September 26th included the Kurdistan Democratic Party and the Patriotic Union of Kurdistan, which in practice means that the two parties signed an alliance without discussing the issue of the presidency!
This alone explains the tweet written by Bafel Talabani, Secretary-General of the National Union, one day before the presidential election session, in which he seemed to rely not on the agreed commitments, or the document signed, as he supposed, but on the commitment of the “believers” from the allies. Assumed in the coordinating framework! And when the leader of a party that describes himself as a center-left and a socialist democrat, “concerns” to the faith and the believers, the reader has to imagine the nature of political action in Iraq!

Political alliances in Iraq are pragmatic alliances related to the direct interest that “assumes” those who sign, through verbal agreements without any clear and specific commitment, or guarantor documents, and they are alliances that have no traditions or customs

In the first round, in which whoever gets two-thirds of the votes (220 votes) is supposed to win, candidate Abdel Latif Rashid managed to get 156 votes, compared to 99 votes for Barham Salih, which necessitated a second round of voting in which Abdel Latif received 162 votes. In exchange for 99 for Barham Salih. This result first reveals the nature of the division within the “state administration” alliance itself! And it confirms the arbitrariness of the “alliance document”, which is supposed to define the nature of the alliance, and the nature of the mutual obligations between the allies! This confirms what we said in last week’s article that political alliances in Iraq are pragmatic alliances related to the direct interest that “assumes” those who sign, through verbal agreements without any clear and specific commitment, or guarantor documents, and that they are alliances that have no traditions or customs!
The most important question here is what is the position of the Sadrist movement on everything that is going on, and what are the consequences of this “silence” on passing a ministry dominated by the framework, rather dominated by the framework hawks from the advocates of “tightening the screw until the last tooth” with the Sadrist movement?
Especially since the briefing of the Special Representative of the Secretary-General in Iraq to the Security Council on 4 October, and the statements issued by the ambassadors of Western countries in Iraq (the ambassadors of the United States of America, Britain and France) have made it clear, beyond any doubt, that they are with the speedy formation of the government, and accordingly The Coordination Framework Government will have international legitimacy that will increase the limitations of the Sadrist movement’s options!
In fact, the Sadrist movement will have only two options. The first is to accept indirect negotiations with the Prime Minister-designate, allowing him to retain his power centers in the executive authority, and perhaps obtain ministries by nominating personalities close to the Sadrists, who are not organically linked to him, as happened in the Ministry of Adel Abdul Mahdi in 2018. Thus, it reduces the ability of the framework hawks to implement their agenda. It also gives itself the opportunity to influence two crucial issues, namely changing or amending the Parliament’s election law, and forming a new election commission, in light of the framework’s absolute dominance over the Parliament!
The second option is to continue the policy of rejecting any direct or indirect negotiations with the “corrupt liars and deceivers,” as the Sadr Minister wrote one day before the presidential election session, and thus using the street to undermine the framework government, with the potential violence that may result from that. Which is an option that refers to the reproduction of the scenario of 2019 with the government of Adel Abdul-Mahdi!
Both options confirm that the Sadrist movement is sucking the results of its involvement in impromptu and unthoughtful decisions and will have to adapt to their consequences for a long time, and perhaps among these consequences is a return once again to the Iranian umbrella, which has proven that it is still the sole actor in what is haphazardly called “Iraqi politics”!