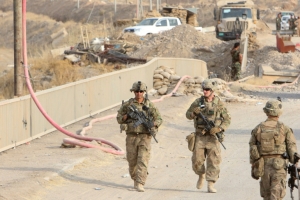 Earlier this year, the United States had several thousand military personnel in Iraq providing direct military assistance to its security forces, but the decision of the Iraqi parliament calling for an end to the presence of foreign forces, and the escalation of American tension with Iran after the killing of the Iranian Quds Force commander Qassem Soleimani, once again sparked the debate over The purpose of the US military mission in Iraq.

In this context, the American Research and Development Corporation, the Rand Corporation, published this month a long study that includes an assessment of the United States withdrawal of its forces from Iraq, and the strategic risks involved in making such a decision.

The study, developed by a number of specialized researchers, concluded that support for a stable and friendly Iraq is in the interest of the United States, continuing and long-term, and that this does not require the continuation of the mission of combat assistance in Iraq in the long term, but requires the maintenance of a small force of military advisers to help in Training and developing Iraqi military capabilities so that Iraq can defend itself.

American tension with Iran escalated after the killing of Soleimani (Reuters).
Options for withdrawal.
The study examined in detail four options related to military withdrawal from Iraq, ranging from non-withdrawal, partial (limited) withdrawal, full withdrawal, and ending the association altogether.

And I concluded that all levels of withdrawal harm the efforts aimed at confronting Iran in Iraq and elsewhere, and that in light of Iran’s explicit intentions and ongoing actions against America, any partial withdrawal will provide some benefits to Tehran, while failure to withdraw will make clear to Tehran that the United States and allied forces that Its leadership will remain permanent and reliable partners of the Iraqi government, and that Iranian pressure will not achieve the desired result, which is the American withdrawal.

The study believes that stopping direct combat assistance to the Iraqi security forces will create a gap that can be filled by the Iranian Revolutionary Guard or the Popular Mobilization Forces, thus strengthening Iran’s grip on the Iraqi security apparatus and undermining the sovereignty of Iraq.

A full withdrawal would increase the opportunity for advisers and pro-Iranians to infiltrate into the training bases of the Iraqi security forces. On the other hand, ending the engagement completely by the United States will result in Iraq seeking to reach strong financial and material support arrangements, and inevitably it will include Iran.

Therefore, the authors of the study recommend that there be a careful choice between non-withdrawal and limited withdrawal. Either of the two options will help achieve the required policy, which is the commitment to having a permanent consultant on a small scale. Failure to withdraw sends a strong message to Iran, to the militia leaders supported by Tehran, to all Iraqis, and to the world as a whole, that the United States will not fear any threat that might lead it to abandon a very clear military commitment to an allied country.

Maintaining the current troop levels would also prevent a reduction in combat capability against ISIS, and would maximize American influence over the Iraqi security forces. However, this situation carries with it the danger of reinforcing the statements of Iranian leaders and some Iraqis that the American military presence is an affront to Iraqi sovereignty. This could shift some of the focus of the protests against the government and against Iran toward American military personnel.

A limited withdrawal is an adverse situation in the general permanent commitment policy. It continues to include maintaining a limited-scale advisory presence, but it begins with a clear, near-term reduction in current troop levels.

If this withdrawal is carried out carefully, and in light of diplomatic communication, it may reduce the current tensions with the Iraqi government, and may spoil Iran’s efforts to shift the focus of the protesters towards the United States. It is possible that the forces participating in the coalition will fill the gaps that will result from the departure of the American forces.