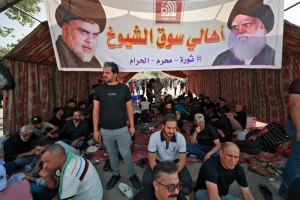 BAGHDAD – The Iraqi Prime Minister, Mustafa Al-Kazemi, Commander-in-Chief of the Armed Forces, on Tuesday evening refused to involve the Iraqi security and military forces in political conflicts, in response to the Popular Mobilization Authority’s announcement of its readiness to defend state institutions after supporters of the Sadrist movement besieged the Supreme Judicial Council.

The PMF said in a statement on Tuesday evening that it was keen “not to be a party to the current political crisis, at a time when the commission finds it obligated to protect civil peace, defend the state, prevent the collapse of its pillars and protect the constitution that everyone swore to protect and abide by.”

Although the commission called on all the leaders of its operations and the leadership of the Samarra operations, in particular, “not to enter the political fray,” and threatened to “hold the violators accountable,” it showed “its readiness to defend state institutions that guarantee the interests of the people, foremost of which is the judicial and legislative authority, and the political system and the constitution.” “.

In the interest of the Iraqi government not to drag the country into a Shiite-Shiite civil war, Al-Kazemi directed “the application of the harshest legal penalties against any member of the Iraqi security and military forces who violate the established instructions,” according to a statement by the spokesman for the Commander-in-Chief of the Armed Forces, Yahya Rasoul.

The statement added that “the Commander in Chief confirms that the Iraqi security and military forces will not be drawn into political conflicts, and will not be a party to them, and their duty will always remain to protect Iraq and its capabilities, and the sanctity of Iraqi blood.”

The protesters set up tents in front of the building of the highest judicial authority in the country, amid a heavy security presence. Some raised Iraqi flags, while others raised pictures of Muqtada al-Sadr. In addition, trucks loaded with large pots of food arrived at the scene.

In the wake of the sit-in, the Supreme Judicial Council decided to suspend its work, its courts and the Federal Court, in protest against the Sadrist movement’s sit-in in front of its headquarters.

In a statement, the parliament accused the Sadrist movement of “pressing the Federal Supreme Court to issue a decision by the state order to dissolve the House of Representatives and sending threatening messages to pressure the court.”

In a move to calm down and absorb the escalation, the Sadrist leader, Salih Muhammad al-Iraqi, called on the supporters of the movement to withdraw from the Supreme Judicial Council in order to “preserve the reputation of the revolutionaries, and not to harm the people,” with the demonstrators continuing to sit in front of the parliament building.

On Tuesday evening, the Supreme Judicial Council announced the resumption of work in all courts, starting from Wednesday, after the Sadrist movement’s supporters withdrew from in front of the council’s headquarters in the capital, Baghdad.

In a statement, the council said, “Considering the withdrawal of the demonstrators and the lifting of the siege on the building of the Supreme Judicial Council and the Federal Supreme Court, it was decided to resume work normally in all courts, starting tomorrow morning (Wednesday),” according to the official Iraqi News Agency.

The council affirmed, “to proceed with taking legal measures against anyone who violates the law and disrupts public institutions.”

On the fourteenth of August, the Supreme Judicial Council announced that it did not have the power to dissolve the House of Representatives, in response to a request from the leader of the Sadrist movement, Muqtada al-Sadr.

Article 64 of the Iraqi constitution stipulates that the Parliament shall be dissolved “by an absolute majority of its members, at the request of one-third of its members, or a request from the Prime Minister and with the approval of the President of the Republic.”

With the Sadrist movement’s supporters failing to subjugate the judiciary, whose decision was embarrassing for the Sadrists, especially with the closure of the courts and the role of the judiciary, the Iran-aligned coordinating framework intends to mobilize its supporters to demonstrate again to break the sit-in of al-Sadr supporters in front of the parliament building.

The source suggested that “the location of the demonstration will be in the same place where the tire crowd is stationed at the walls of the Green Zone, without specifying the date yet, but it will not exceed the next few days.”

He pointed out that “the goal of the demonstration is to ask the concerned authorities to break the siege on Parliament and resume its sessions, in addition to attracting international support to restore legitimacy to state institutions.”

Since the parliamentary elections in October 2021, Iraq has been living in complete political paralysis with the inability to elect a new president of the republic and form a new government, in light of continuous political differences.

The level of escalation between the Sadrist movement and its opponents in the coordination framework rose on the thirtieth of July, when al-Sadr supporters stormed the Iraqi parliament building in the fortified Green Zone in central Baghdad, demanding the dissolution of parliament and the holding of early elections.

Sadr’s opponents, in the coordinating framework that includes the bloc of former Prime Minister Nuri al-Maliki and the Fatah bloc representing the Popular Mobilization, want to form a government before going to early elections.

Supporters of the coordination framework have also held a sit-in in front of the Green Zone, which includes government institutions and Western diplomatic headquarters, since the twelfth of August.

On August 10, Muqtada al-Sadr demanded the judiciary to dissolve parliament, but the judiciary considered that it did not have this authority.

Attempts to dialogue between the two parties did not lead to any result yet. And the leaders of the Iraqi political blocs held a meeting at the Government Palace in Baghdad last week, which was boycotted by the Sadrist movement, and was called by Al-Kazemi in an attempt to find a way out of the crisis.

Leaders in the coordination framework, especially former Prime Minister Nuri al-Maliki and head of the Al-Fateh bloc Hadi al-Amiri, participated in this dialogue, which was attended in addition to Al-Kazemi, the President of the Republic and Parliament, and the United Nations envoy, Jenin Plasshart.

The Sadrist movement repeated its rejection of dialogue more than once. Al-Sadr said in a tweet two days ago that he had submitted a “proposal to the United Nations for a public dialogue session… We did not see a concrete answer.”

He added, “They do not expect us to have a new secret dialogue after that,” adding, “I have made a lot of concessions for the sake of the people and civil peace. We are waiting for what they can do to fix what has been corrupted to save Iraq.”