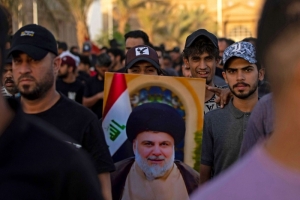 After a year of political deadlock in Iraq, the features of the solution began to appear with the announcement of the formation of a new political alliance that includes the various Iraqi components, including allies of the Sadrist movement, which reduces the chances of the movement toppling the new government.

BAGHDAD – Talk about forming a new coalition in Iraq, which is expected to confuse the accounts of the Sadrist movement and its leader Muqtada al-Sadr, raises hopes of overcoming the political blockage that has occurred in the country for a year and forming a new government.

Since the twenty-fifth of September, local media have circulated news that political forces have signed an agreement document to announce a new alliance that includes the most prominent Shiite forces with the exception of the Sadrist movement, the Sunni forces represented by the “Sovereignty” and “Azm” alliances, and the Kurdish forces represented by the two main parties, the Kurdistan Democratic Party and the Union The Patriotic Kurdistan, in addition to the “Babylonian” movement and other forces that have not decided their position yet.

For the first time, the coordination framework forces officially referred to the name of the “state administration coalition”, in a statement issued on the 28th of September, on the occasion of the parliament’s resumption of its regular sessions. powers.”

But the “state administration coalition” may be a real entity that is not officially announced, or at least the coordinating framework forces may abandon this framework and announce themselves later as the “state administration coalition”, whose name was mentioned for the first time in the coordinating framework statement, which It was issued after the end of the parliament session to renew confidence in the Speaker and elect his first deputy to replace the Sadrist bloc’s deputy, Hakim al-Zamili, who resigned with his fellow bloc deputies on the twelfth of June.

Observers believe that the political path is moving towards the formation of a consensus government that includes all the political forces that won the recent elections from all components according to political quotas, meaning that it will be the government of a “state administration coalition”, instead of the coordination framework government.

This is supported by the insistence of the coordination framework, and the tacit acceptance of the “Sovereignty Alliance” and the “Kurdistan Democratic Party,” the two partners of the Sadrist movement in the “Save the Homeland” coalition, and their desire to get out of the political deadlock and form a government that will approve laws on the general budget and run the affairs of the state and its institutions.

Apparently, the coordinating framework, by adopting the establishment of a “state administration coalition”, seeks to create a situation that would make the Sadrist movement in a thorny situation if it sought to bring down a government that includes yesterday’s partners, the Sovereignty Alliance and the Kurdistan Democratic Party, and includes political blocs from all components of the Iraqi people.

A full year has passed since the end of the legislative elections in Iraq in October 2021, and the political parties are still far from agreeing to form a new government.

The dispute in the Iraqi political scene is centered between the two main Shiite forces, the “coordinating framework” and the “Sadr movement,” and the competition between them is at its most intense to seize power and resources in the first place.

In addition, details come about the repercussions of personal differences between the head of the Sadrist movement, Muqtada al-Sadr, and the head of the State of Law coalition, Nuri al-Maliki, the most prominent and influential leader in the coordinating framework that includes the largest active Shiite political forces.

After 8 months of failure in negotiations to form a national majority government, and political and media maneuvers on more than one level, the head of the Sadrist movement called on the 73 Sadrist bloc deputies to submit their resignations last June.

As of the thirtieth of July, Al-Sadr called on his followers to storm the Green Zone and sit inside the parliament building, to prevent the holding of any sessions that will inevitably lead to the formation of a government led by the Coordination Framework Forces, which has become constitutionally qualified to nominate its candidate for prime minister and assign him by the elected President of the Republic to form the new government. .

In a final attempt to seize power and exclude the coordination framework, armed groups from the military wings of the Sadrist movement, represented by Saraya al-Salam, the “Promised Day” Brigade, and the Mahdi Army, stormed the Green Zone for more than 18 hours on the twenty-ninth and thirtieth of last August.

However, these incursions did not achieve any field successes in achieving their goals by seizing the presidential and government palaces, or the official TV building and other sovereign institutions, in an armed operation classified by observers as “a full-fledged coup attempt aimed at seizing complete power and undermining the existing political system twenty years ago.” years.”

The majority of political parties believe that any solution to the council must be in accordance with the constitutional mechanisms that impose the existence of a new government with full powers, an alternative to the government of Mustafa Al-Kazemi, which is considered by virtue of the resignation, or, in a more accurate description, a daily caretaker government that does not have full powers.

However, the political competition for power and resources between the coordination framework and the Sadrist movement prevented the formation of the new government a year after the elections.

With many statements about the imminent announcement of a new alliance called the “Coalition of State Administration”, it has not been officially announced yet, while it is likely that a real movement has taken place in recent days to lay the foundations for a new understanding between the political forces to manage the state in the next stage, through a broad alliance in If the House of Representatives succeeds in electing a President of the Republic and forming a new government.

As was expected, on the twenty-eighth of September, the House of Representatives renewed confidence in its speaker, Muhammad al-Halbousi, who took a decision on the twenty-sixth of September to invite the members of the Council to vote on his resignation, that is, one day after the statements of leaders in the coordination framework on the twenty-fifth of September about Formation of the “Coalition of State Administration” coalition.

For 8 months, the Sadrist movement failed to form a national majority government that crosses sectarian and ethnicity within the “Save the Homeland” coalition, which includes representatives of Sunni Arabs and Kurds, for reasons related to the position of the coordination framework that played a role in disrupting the parliament’s holding sessions to elect a new president of the republic who is constitutionally authorized Assigning the Sadrist bloc candidate to form the new government.

But the coordinating framework also failed to form a new government, four months after the resignation of the Sadrist bloc members, and the nomination of the framework candidate, Muhammad Shia Al-Sudani, for prime minister. The failure of the coordinating framework forces is due to reasons related to the Sadrist movement’s resorting to the option of the street, disrupting the sessions of the House of Representatives, and threatening to prevent any session to vote on the election of a new president of the republic or assign the Sudanese.

Despite the fact that the head of the Sadrist movement announced his “permanent” retirement from political action on the twenty-ninth of last August, the movement is still the most important political player in the equation of forming the new government.