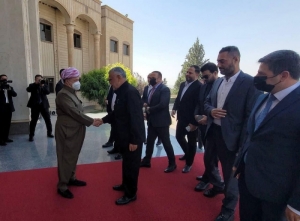 The coordinating framework, which constitutes the umbrella group for the forces loyal to Iran, is keen to form a broad political alliance that guarantees it control of the helm of matters, but it faces difficulties, foremost of which is the dispute between the Kurdish forces over the mechanism of choosing a president for the republic.

Baghdad – Iraqi political circles say that the coordinating framework is proceeding with its new allies in forming a coalition of state administration, regardless of the position of the leader of the Sadrist movement Muqtada al-Sadr, noting that the main knot that prevents a final agreement on this coalition is the continuation of the dispute between the two main Kurdish parties over Presidency.

The circles indicate that forces in the framework such as the leader of the Al-Fateh Alliance Hadi al-Amiri, are still hoping to obtain the support and blessing of the Sadrist movement to move forward with the arrangements for the next stage, and that a proposal has been presented to grant the latter six ministerial portfolios from the total portfolios allocated to the Shiite component in the next government.

The circles indicate that the proposal gives the Sadrist movement the choice of ministries it wants, but it is unlikely that al-Sadr will accept this offer, as he insists on his position in terms of rejecting a government led by the leader of the Dawa Party, Muhammad Shi`a al-Sudani, who is close to his political rival, the leader of the State of Law coalition, Nuri al-Maliki, in exchange The latter stuck to it.

Faeq Yazidi: The Iraqi parliament is the body concerned with choosing the president of the republic

On Saturday, the parties representing the State Administration coalition held a consultative meeting on the completion of the constitutional entitlements represented in the election of a President of the Republic and the formation of the new government.

The coalition, which is still in the process of being completed, includes the coordination framework that forms the political umbrella for the forces loyal to Iran, the Kurdistan Democratic Party, the Patriotic Union of Kurdistan, the Sunni Sovereignty Coalition, and the Christian Babylon bloc.

The circles say that the coordinating framework is keen to form this coalition, because it is the only way out so far to end the political crisis that the country has been witnessing for a year, and because this coalition will give it control over the entire political process, but the absence of consensus among the Kurds over the presidency poses a dilemma in front of it.

According to the Iraqi regime, the presidency of the republic belongs to the Kurdish share, and there was an implicit agreement within this component that the Patriotic Union of Kurdistan would nominate a figure from its ranks to take the position, but its partner, the Kurdistan Democratic Party, has shown since 2018 a desire to evade this agreement.

In light of the impossibility between the two Kurdish parties, it was offered that each of them go with their candidates to parliament, but the Democratic Party rejects this approach, before ensuring the support of the coordination framework, and the same is true for the National Union.

As a way out of the crisis, and in light of the unwillingness to bear the consequences of angering one party or the other, forces within the coordination framework are now inclined to the Democratic Party’s option to have this file resolved by the Kurdistan Regional Parliament, before going to call for a session in the Iraqi parliament to elect the President of the Republic.

The election of a President of the Republic in Iraq is a mandatory passage to form a new government, as the president is the one who assigns the candidate of the largest bloc for prime minister to form the government.

But the PUK refuses to discuss this idea, because the Democratic Party led by Massoud Barzani has the majority in the parliament of the region, and therefore the vote will certainly be in favor of the latter.

The leader of the National Union, Faeq Yazidi, told “Baghdad Today” news agency on Sunday that “the party concerned with choosing the president of the republic is the Iraqi federal parliament.”

Yazidi added that “the Patriotic Union of Kurdistan is confident that its candidate for the presidency of the republic will pass Saleh in the Iraqi parliament, even if the 2018 scenario is repeated and we entered with two Kurdish candidates.”

Observers say that the PUK’s refusal to go to the regional parliament is understandable, but it constitutes an additional complication for the coordination framework, as the latter cannot break the will of the Union, which has supported it since the beginning of the crisis in Iraq, on the other hand, it cannot abandon the support of the Democratic Party, which has a bloc In addition, he may drag his ally with him, the Sunni Sovereignty Coalition.

The Patriotic Union is committed to the candidacy of President Barham Salih for the position, on the other hand, the Democratic Party insists on the nomination of the Minister of Interior of the Kurdistan Region, Riber Ahmed

A member of the Wisdom Movement, Ahmed al-Issawi, stated that “the coalition of state administration agreed on all matters, including choosing the president of the republic, which is a Kurdish issue, where the choice was made between two things, either a settlement candidate would come from the Kurdistan region or they would come with a method for the selection mechanism within the Iraqi parliament.”

Al-Issawi said, in statements to local media, that “after the Kurdistan Democratic Party’s proposal, the presidential candidate will be pushed to vote on him within the Kurdistan region before bringing him to Baghdad and voting on him in the Iraqi parliament.”

He explained that “the coordination framework encourages the National Union to go to this proposal and vote under the dome of the Kurdistan Parliament on the candidate for the presidency of the republic, so that the Kurdish parties come out satisfied with the candidate.”

Al-Issawi stressed that “it is important that the two Kurdish parties, the KDP and the Patriotic Union, reach a specific agreement in which they are only satisfied with this situation.”

Regarding the date of the formation of the next government, the leader of the Wisdom Movement expected that it would be formed “within the next two weeks.”

Observers believe that the failure of the two Kurdish parties to agree on a mechanism for choosing a president for the republic will keep the agreement to form a coalition of state administration suspended, which does not serve Iraq, which completes today, Monday, its first year since the early legislative elections, without a new government.