Iraq’s debts are more than $100 billion..Does high oil prices contribute to paying them?

Iraq’s debts are more than $100 billion..Does high oil prices contribute to paying them? 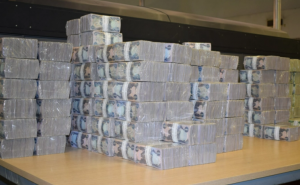 BAGHDAD – More than 95% of Iraq depends on crude oil exports to build the general budget annually, while the agricultural, industrial, tourism and other sectors constitute only about 5% of the annual finance.

And last July, Iraq exported about 100 million barrels from oil fields in the center and south of the country, while the exports of Kirkuk fields (north) through the Turkish port of Ceyhan amounted to about two million and 350 barrels.

An exclusive photo sent by him – the economic advisor to the Iraqi Prime Minister – Mazhar Muhammad Salih
. Divide Iraq’s debts into internal, external and very long-term (Al-Jazeera Net)
the size of the indebtedness .
According to the economic advisor to the Iraqi government, Dr. Mazhar Muhammad Salih, Iraq’s debts are divided into 3 types: Internal, external, and very soft long-term.

In an interview with Al-Jazeera Net, Saleh detailed these debts with numbers, saying that the internal public debt amounts to 50 billion dollars, and the Central Bank of Iraq still possesses 63% of the principal debt and its interests, and the annual interest ranges between 2 and 3%, while the rest of the internal debt is still in the possession of Governmental commercial banks, which means that they are settlements within the government financial system exclusively in the form of treasury transfers for a period of one year, whose payment has been postponed until the annual interest on them has been paid from the annual allocations in the general budget.

He pointed out that the Council of Ministers approved, months ago, a gradual annual plan to pay off the internal public debt.

With regard to the external public debt, Saleh explains that it is divided into two parts. The first is an outstanding debt of $20 billion, which is currently repaid on a regular annual basis by the Ministry of Finance, and is expected to be repaid by the year 2028.

As for the second part of the foreign debt amounting to 40 billion dollars, it represents almost bad debts that were not claimed by the creditors under the terms of the Paris Club Agreement of 2004 regarding the cancellation of 80% of Iraq’s foreign debts before 1990, dating back to the era of the former regime.

According to Saleh, “The suspended external debt belongs to 8 countries, 4 of which are Gulf countries that loaned Iraq during its war with Iran, and it is considered in international norms as obnoxious or hateful debts because it financed the war and did not serve economic development, but it still appears in the accounts books of those countries, It is expected to be written off 100%, without specifying a time.”

As for the last part that the economic advisor talked about, it is very soft long-term debts related to financing development projects that were submitted after 2003 under the Madrid Donor Conference pledges in October 2003, and are due to be paid after more than 20 years, and are estimated at about $6 billion belonging to the Cooperation Agency. Japanese International Economic and some EU countries funds.

Dadush told Al-Jazeera Net that the revitalization of the non-oil sectors will advance the Iraqi economy and help reduce its debt, explaining that imports of goods and services in this case will decrease and reflect positively on the economy in terms of reducing the exit of foreign currency, specifically the dollar, in addition to employment.

He pointed out that the process of economic diversification should be through investing the financial surpluses derived from oil and developing real economic sectors to generate added value by investing in the industrial sector for all locally manufactured goods and products and moving towards advanced capitalist agriculture based on modern machinery and equipment.

In parallel, the expert in oil and energy affairs, Dr. Bilal Al-Khalifa, identifies the Iraqi government’s use of the financial abundance of oil in matters other than paying debts.

The Caliph explained to Al Jazeera Net that part of the financial abundance in Iraq was used to buy US bonds, as its holdings of bonds rose last March by two billion and 117 million dollars, or 8.79%, to reach 26 billion dollars.

He added that Iraq increased its foreign exchange reserve balance to reach $72 billion, while it took a third step by exploiting the financial abundance to buy gold, and now owns 130 tons, ranking 30th globally and fourth in the Arab world.

He concludes that the government has not exploited the financial abundance to pay off debts, and insists on internal and external borrowing, and this is what was approved in the Emergency Food Security Law, which contained the borrowing clause.

In turn, a member of the Iraqi parliament, Zainab Juma Al-Moussawi, said that the expired government – led by Prime Minister Mustafa Al-Kazemi – did not present an economic program to pay off debts, but rather worked to raise it through the emergency food security law.

Al-Moussawi adds to Al-Jazeera Net that the financial abundance of oil exports spares Iraq from borrowing, especially at the present time, which is witnessing a continuous rise in crude prices, which will rise with the approach of winter as a result of cutting Russian supplies of oil and gas from the European Union.

Al-Moussawi concluded by calling on the next government to make optimal use of the financial abundance and to stay away from internal or external borrowing, revealing a parliamentary move in the event of his return soon to discuss the issue of Iraq’s debts and ways to pay them.