Do the calls for dialogue and calm in Iraq serve al-Maliki or al-Sadr?

Do the calls for dialogue and calm in Iraq serve al-Maliki or al-Sadr? 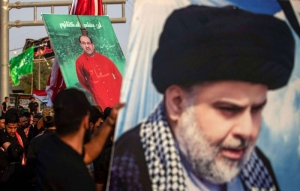 BAGHDAD – Iraq’s leaders are seeking to find a political way out of the current situation, after the escalation of tension between the Sadrist movement and the coordination framework, amid fears that it will negatively affect stability in the country.

Iraqi President Barham Salih said during the Islamic Conference to Combat Violence against Women, which was held on Saturday, that Iraq is going through a delicate and sensitive circumstance and serious challenges.

He added that “the current political stumbling in the completion of the national constitutional entitlements after ten months of holding the elections is unacceptable.”

He continued, “The option of dialogue must be won, regardless of the degree of crisis and disagreement,” stressing the need for “reform and addressing the existing deficiencies in order to reach radical solutions that enable Iraqis to build a real state that protects and serves the interests of all Iraqis.”

He said, “The political movement, with its multiple tracks, should not turn into a dispute that threatens the integrity of the national project.”

Iraq is still witnessing a political crisis since the announcement of the results of the parliamentary elections that took place in the country on the tenth of last October, when no government was formed or a president was chosen.

Supporters of the Sadrist movement, who have continued their sit-in since the thirtieth of last July, in and in front of the Iraqi parliament in the Green Zone, are calling for the parliament to be dissolved and to go to early elections to get out of the crisis.

The political movement, with its many tracks in Iraq, must not turn into a deep dispute that threatens the integrity of the entire national project

Al-Sadr entered into personal disputes with the former Iraqi Prime Minister and the most prominent leaders of the coordination framework, Nuri al-Maliki, where he called on him last month to retire from politics or surrender himself to the judiciary, accusing him of inciting fighting among Shiites because of one of his leaked recordings.

In the leak, the leader of the State of Law coalition, Nuri al-Maliki, threatened to attack Najaf to bring down what he called “the Sadr project.”

And this month, al-Sadr called for the formation of an Iraqi government that does not include his current or the State of Law coalition led by Nuri al-Maliki as a way out of the political stalemate, a proposal that confirms the extent of the existing hostility between the two men.

It appears that the escalating tension between the Sadrist movement and the coordination framework, especially the State of Law coalition, is pushing Iraq’s leaders to intervene, amid questions whether the call for dialogue serves al-Maliki or al-Sadr, who has gained strength after his success in winning the last legislative elections.

During his participation in the conference, Iraqi Prime Minister Mustafa Al-Kazemi said that “the political crises in Iraq are unreasonable to remain without solutions, and we have overcome severe security crises, overcome an economic crisis, and provided salaries to employees.”

He added that “the country still has today a great opportunity to achieve economic booms,” calling on “everyone to make concessions and be keen on the country because Iraq is greater than all.”

He called on everyone to assume responsibility in reaching solutions to the crisis, stressing that the key to the solution lies in everyone sitting at the national dialogue table.

For his part, Iraqi Parliament Speaker Muhammad al-Halbousi reiterated his support for the national dialogue initiative because the situation in Iraq cannot continue in this state.

He said, “What we have reached today represents a regression from what we were before, and we must sit at the dialogue table and proceed with early elections by sitting at a dialogue table that will reach solutions to the current political crisis.”

In turn, Ammar al-Hakim, head of the National Wisdom Movement, called on all parties and partners to give priority to the nation’s interest in overcoming the current crises and moving towards a secure and prosperous future for the Iraqi people.

Al-Hakim said during the conference that “going to early elections needs preparations and parliamentary and legal discussions that make this option a practical, safe and acceptable path for all partners.”

He added, “I send a message of love and appreciation to our brother Muqtada al-Sadr and the honorable sons of the Sadrist movement, and I say to them we were, are, and will remain the sons of one nation, one history and one family. Differences of opinions and misunderstandings should not separate us, and our unity should not be torn by the hands of sedition, ignorance and hatred.”

He stressed that “mobilizing all social and political energies, investing them, and unifying their compass represents the best solution for what we are going through,” noting that “throwing accusations, evading responsibilities, and open escalation are all things that do not serve citizens with anything and only increase their resentment and anger on all parties.”

Al-Hakim pointed out that “raising the ceiling of political demands without the presence of realistic and practical projects does not represent an entrance to resolving the outstanding and pressing issues in service, construction and economic matters, and that the policies of intolerance and bullying cannot be a substitute for what the dialogue produces.”