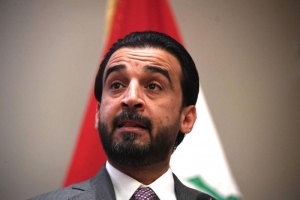 The political scene in Iraq is witnessing a state of border polarization, which is further fueling the crisis that Iraq has been witnessing since last October, which has taken an upward trend in the recent period. Observers say that following the return of the Kurdistan Democratic Party and the Sunni Sovereignty Alliance to align explicitly with the Sadrist movement after a period of stagnation, the crisis in Iraq has become more complicated.

BAGHDAD – The second session of the National Dialogue, which was supposed to be held Thursday, has been postponed, at the invitation of Iraqi Prime Minister Mustafa Al-Kazemi, to discuss ways to end the political crisis in Iraq; This was against the background of the refusal of the Kurdistan Democratic Party and the Sunni Sovereignty Alliance to participate without the presence of the Sadrist movement.

Observers believe that the new position of the Kurdistan Democratic Party and the Sunni Sovereignty Alliance is not devoid of political messages in relation to the two sides’ decision to leave the “alleged” area of ​​neutrality and to announce again to entrench themselves behind the Sadrist movement, with which they had previously formed an alliance to save a homeland, during the latter’s management of the political process before Withdrawing from it last June.

Last Wednesday, the Government Palace in Baghdad hosted a dialogue session in which the three presidencies and leaders from the coordinating framework participated, including the leader of the State of Law coalition Nuri al-Maliki, the leader of the Conquest Alliance Hadi al-Amiri, and the head of the Wisdom Movement Ammar al-Hakim.

The Kurdistan Democratic Party was represented by Foreign Minister Fouad Hussein, while the Sunni Sovereignty Alliance was represented by Parliament Speaker Muhammad al-Halbousi, and the Patriotic Union of Kurdistan was represented by its president Bafel Talabani. On the other hand, the Sadrist movement boycotted the session, which later said of the recommendations that came out, “They do not fatten and do not sing from hunger.”

Al-Kazemi had hoped to build on that session and persuade the Sadrist movement to participate. The four presidencies in Iraq, represented by the President of the Republic, Barham Salih, the Prime Minister, the Speaker of Parliament and the President of the Supreme Judicial Council, Faeq Zeidan, stressed in their meeting on Wednesday, “the need to take all steps to resume effective dialogue committed to the foundations of the supreme national interest, to protect civil and social peace, and to reassure citizens.” And take the necessary measures to remedy the current crisis.”

However, observers believe that all indications are in the context of postponing this dialogue indefinitely with the new developments on the scene, including the position of the Sunni and Kurdish components, who apparently decided their position in terms of declaring full alignment with the leader of the Sadrist movement, Muqtada al-Sadr.

Observers point out that the position of the Democratic Party and the Alliance of Sovereignty was expected; Although the withdrawal of the Sadrist movement from the political process confused their plans, especially since the step was not taken in coordination with both, the two sides were keen from the beginning to express positions that tend to go along with the movement, whether with regard to the escalation in the street or regarding its demands that we announced acceptance of after a period of silence. .

Observers make it clear that one of the motives that lead the Sunni and Kurdish parties to identify with the agenda of the Sadrist movement, is that the latter currently appears to be the strongest party in the ongoing conflict with its opponents from the coordination framework.

They say that another reason, for example, that makes the Kurdistan Democratic Party keen to maintain its alliance with al-Sadr, is the alliance between the coordination framework and its Kurdish opponent, the Patriotic Union of Kurdistan.

The Kurdistan Democratic Party wants to monopolize the entire Kurdish share of the central authority in Iraq, including the presidency, which the Patriotic Union is trying to address.

Observers point out that it is not possible to ignore the tension in the relationship between the Kurdish party and Iran, which obviously affects the relationship with the leaders of the framework.

With regard to the Sovereignty Alliance, there are several motives that lead it to declare a complete alignment with the Sadrist movement, the most important of which are the movements of some forces belonging to the coordination framework, led by al-Maliki and the leader of Asa’ib Ahl al-Haq, Qais al-Khazali, to support the formation of a Sunni alliance with the aim of breaking the dominance of the Alliance of Sovereignty on the Sunni arena.

Recently, political and clan figures from Anbar Governorate, western Iraq, met to consult on the establishment of a new Sunni political project. Among the most prominent attendees at the meeting were the leader of the Al-Hal Party Jamal Karbouli, the head of the national project Jamal Al-Dari, the leader of the Islamic Party Nuri Al-Dulaimi, the leader in the Azm Alliance Qassem Al-Fahdawi, the former Minister of Planning Salman Al-Jumaili, and the former Governor of Anbar Suhaib Al-Rawi.

Al-Karbouli said in a tweet on his Twitter account, “During this important meeting, we set the general outlines of a political project that respects human dignity and prevents political exploitation of public positions, silences or confiscations of freedoms,” noting that this meeting heralds a “new era.”

Observers say that the establishment of this alliance aims mainly to end the sovereignty alliance’s monopoly on the Sunni arena, and on the other hand, it is within a significant Sunni bloc that supports the framework in the project of forming a new government.

Observers point out that the approach of the parties to the conflict in Iraq to the settlement is in the context of igniting it, which threatens the country to enter into a slip that cannot be predicted with its end, noting that the attention of these parties is currently focused on the Federal Court’s decision next week regarding the lawsuit to dissolve Parliament, as what before This decision will not be the same after it.