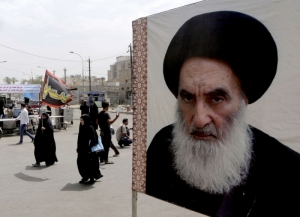 BAGHDAD – The Iraqi judiciary blocked the attempts of the leader of the Sadrist movement, Muqtada al-Sadr, to plunge him into the political crisis after he rejected his call to dissolve parliament.

And the Supreme Judicial Council in Iraq announced on Sunday that it does not have the power to dissolve the parliament, in response to the request of the leader of the Sadrist movement, Muqtada al-Sadr, to dissolve the country’s parliament within a period not exceeding a week.

The parliament said in a statement that it “discussed Muqtada al-Sadr’s request, dated 8-10-2022, regarding the dissolution of the House of Representatives,” according to the official Iraqi News Agency.

He added, “The Judicial Council does not have any authority to allow the judiciary to interfere in the matters of the legislative or executive authorities in application of the principle of separation between the three legislative, executive and judicial powers stipulated in Article (47) of the Constitution of the Republic of Iraq for the year 2005.”

The Judicial Council called on “all political and media parties not to involve the judiciary in political rivalries and competitions.”

He added that “the judiciary stands at the same distance from everyone, because the basis on which it rests is the application of the constitution and the law, and these are general rules that apply to everyone with the same standard and are not subject to interpretation or interpretation.”

The constitution provides for the dissolution of the House of Representatives by an absolute majority of its members, at the request of one-third of its members, or a request from the Prime Minister and with the approval of the President of the Republic.

Al-Sadr had called on the judiciary to dissolve parliament “at a maximum date by the end of next week,” and also asked his resigned deputies and his protesting supporters to “submit formal lawsuits to the Federal Court through legal means.”

Activist Saleh Muhammad Al-Iraqi, Minister of Al-Sadr, published the form of the lawsuit to be submitted on his Twitter page, before deleting it and publishing an amended one.

There are no signs of a decline in the country’s political crisis, even weeks after al-Sadr’s supporters stormed parliament, despite the growing public anger resulting from the political deadlock that has exhausted the caretaker government and its ability to provide basic services.

The competition between the two Shiite political camps continues, while Ali al-Sistani, seen as the only voice likely to be able to end the dispute, remains silent.

Hundreds of Sadr’s supporters are still camped outside the legislative building in Baghdad, ready to escalate if their demands are not met.

The two factions do not seem ready to make concessions to end the ten-month political crisis, the longest since the US invasion in 2003.

Three officials at the Sistani School in the holy city of Najaf said he did not use his influence because he did not want to appear to take sides.

“The Marjiya is watching the situation with concern,” one of the officials told the Associated Press, referring to Sistani. He stressed that the man “will not interfere at the present time; His intervention may be seen as favoring one party at the expense of another.

Sistani rarely interferes in political affairs, but he changes the course of Iraqi politics when he does.

His sermon in 2019 led to the resignation of then-Prime Minister Adel Abdul-Mahdi amid massive anti-government protests, the largest in Iraq’s modern history. The administration of Mustafa Al-Kazemi was sworn in with the aim of holding early elections that took place in October 2021.

The Najaf official said Sistani is tired of the current Iraqi political dynamics. And he did not resume his usual Friday sermons, which were decided to be suspended during the outbreak of the Corona epidemic.

Al-Sistani’s doors are still closed to the political elites in Iraq, indicating that he does not agree with their policies.

Officials said Sistani had red lines that would force him to intervene if they were crossed, including bloodshed and attempts to undermine what is seen as the foundations of democracy in Iraq.

“Muqtada knows these red lines and will not cross them,” said one of the officials.

The leader of the Al-Fateh Alliance Hadi Al-Amiri began talks with various political parties, which observers say are aimed at extrapolating positions before a possible meeting with Al-Sadr, in the hope of reaching an agreement.

On Sunday, the Al-Fateh Alliance announced the arrival of Al-Amiri to Erbil (north) as part of a delegation of leaders of the coordination framework to discuss the political crisis in the country, after his meeting with the Speaker of Parliament (Parliament) Muhammad Al-Halbousi in Baghdad.

The coalition’s media office said in a statement that “the delegation will meet with the leader of the Kurdistan Democratic Party, Massoud Barzani, before heading to Sulaymaniyah to meet the President of the Patriotic Union of Kurdistan, Bafel Talabani, and the head of the New Generation Movement, Shaswar Abdul Wahed, in addition to the head of the Justice Group, Ali Babir.”

He added, “The delegation of the coordination framework with the Kurdish parties and forces will discuss the current political situation and developments in the government formation crisis.”

The Al-Fateh Alliance includes political arms of armed Shiite factions, some of which are close to Iran, and is part of the coordination framework that also includes the State of Law coalition, the State Forces Alliance, the Victory Alliance, the Ataa Movement and the Virtue Party, all of which are Shiite forces.

Late on Saturday, Hadi al-Amiri, the head of the Fatah Alliance, met the Speaker of Parliament, Muhammad al-Halbousi, in Baghdad.

The media office of the Speaker of the Council stated in a statement that “the Speaker of Parliament, Muhammad al-Halbousi, received the head of the Al-Fateh Alliance, Hadi al-Amiri, to discuss the political situation in the country.”