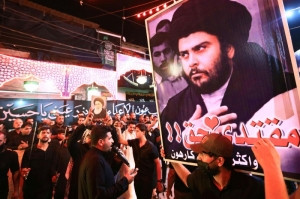 BAGHDAD – The political crisis in Iraq is heading towards escalation after the leader of the Sadrist movement, Muqtada al-Sadr, called on the judiciary to dissolve parliament no later than the end of next week, which prompted the other anti-Sadr party, the coordination framework, to mobilize its supporters again to demonstrate at the gate of the Green Zone, in which Sadr’s supporters are camping. For the second week in a row, which indicates the return of the crisis to the street and the possibility of its aggravation.

On Wednesday, al-Sadr held the judiciary responsible for dissolving parliament, stressing that it (the judiciary) is at stake, and it must take into account the interests of the people, and not be subject to pressures exerted on it, threatening to escalate otherwise.

With the judiciary not issuing a specific position in response to al-Sadr’s call, the coordinating framework that includes forces allied to Iran, which seeks to form a new government, began mobilizing its supporters again after a meeting on Wednesday night, in an indication of the possibility of a new descent to the street with a demonstration against the sit-ins of the Sadrists.

In a statement to what is known as the “Organizing Committee to Support Legitimacy and Preserve State Institutions,” which was formed by the coordination framework, it said, “We believe in the need to stand with the legal and constitutional steps to defend the state’s judicial and legislative institutions, and to expedite the formation of a national service government with full powers that works on In the face of crises and challenges, we invite the people to actively participate in demonstrations under the slogan ‘The people protect the state’.

Supporters of the Sadrist movement began filling out forms to file lawsuits against the presidents, ministers and parliament, in addition to their jobs, to bypass the constitutional deadlines in choosing a president of the republic and assigning a prime minister, and the parliament’s failure to fulfill its constitutional responsibilities by completing the formation of the executive authority in its two branches, the president and the prime minister.

The current is working to open special registration centers for filing lawsuits in each region, with the assignment of a lawyer in each center.

The civil and democratic forces, unions and professional unions intend to go out in mass demonstrations tomorrow, Friday, to demand the dissolution of the Iraqi parliament and the holding of early legislative elections.

Lawyer Zuhair Ziauddin, the general coordinator of the Democratic Current, told the Iraqi Communist Party’s “Tariq al-Shaab” newspaper, which was published on Thursday, that “tomorrow’s demonstration on Friday is to convey the cry of the masses choked from the fire of quotas against the deterioration of the political process and repeated blockages, and the failure to reach effective and real solutions to crises.”

He stated that “the participation of the Iraqi Democratic Movement is not limited to Baghdad’s coordination, but the coordination of the governorates of Babylon, Karbala, Diyala and Salah al-Din will participate, and we will work with all national forces to reach a radical solution, to address the suffering and crises experienced by the Iraqi citizen.”

And the Iraqi Prime Minister, Mustafa Al-Kazemi, called on the political blocs to assume their responsibilities by resolving the issue of the political blockage and resorting to dialogue to resolve differences.

Al-Kazemi said during his visit to Nineveh Governorate on Wednesday, “I hope everyone will work with all force to resolve the political blockage and resort to dialogue to resolve differences.”

He added, “We have no choice but dialogue, and dialogue for a thousand years is better than the moment we clash with as Iraqis.”

The representative of the Kurdish forces, Hoshyar Abdullah, confirmed that the current parliament has lost constitutional legitimacy, and said through his account on Twitter, “The national voices that filed a lawsuit against this parliamentary session have previously supported this lack of legitimacy, due to the clear abuses of the constitutional deadlines with regard to completing the entitlements to form the new government. After the last elections, therefore, it is inevitable that Parliament should be dissolved, because it has lost constitutional legitimacy.”

The researcher in Iraqi political affairs, Firas Elias, confirmed that the situation reached a dead end, and believed that “after the expiration of the deadline given by al-Sadr to the judiciary to dissolve parliament, he is the one who will determine which path Iraq will take, clash or solution…the two parties have exhausted their options, so there are no longer gray areas. Al-Sadr’s supporters are in the street, and the language of confrontation governs their behavior, and Nuri al-Maliki (former Prime Minister) with his speeches increases their stubbornness to stay… It is the bone-breaking stage.

Iraq is facing turmoil and a stifling political crisis against the backdrop of the results of the Iraqi parliamentary elections that took place in Iraq on October 10, 2021 and so far, as the political blocs have been unable to reach understandings to complete the political process and nominate a new president for the country and a candidate to form the new Iraqi government.

Separate areas in Baghdad are witnessing strict security measures and a heavy deployment of security forces to establish security and order, amid calls for restraint, calm and dialogue.