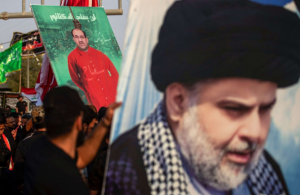 BAGHDAD – The Shiite cleric and leader of the Sadrist movement, Muqtada al-Sadr, on Tuesday implicitly attacked the head of the State of Law coalition, Nuri al-Maliki, for his refusal to dissolve parliament and go to early elections before the parliament returns to meeting, by renewing his refusal to take over the reins of government in Iraq, which indicates the size of the government. The enmity between the two political opponents, and put Iraq in the jaws of a political crisis that will not ease in light of each of them sticking to its own conditions.

This comes at a time when the sit-in of supporters of the leader of the Sadrist movement, the most prominent opponent of the owners, entered its second week in the courtyards of Parliament to demand the dissolution of the Iraqi parliament and the holding of new parliamentary elections.

In late July, supporters of Muqtada al-Sadr stormed the fortified Green Zone in central Baghdad and entered Parliament, before moving their sit-in to its surroundings.

The political crisis in Iraq reached its climax with Al-Sadr’s rejection of his opponents’ candidate in the coordination framework for the premiership. Al-Sadr raised the level of pressure on his opponents, relying on his ability to mobilize the street, calling on them on Wednesday to dissolve parliament and hold early elections.

Al-Sadr said on Twitter on the occasion of the Ashura commemoration, which Shiite Muslims commemorate on Tuesday, “I swear by your blood, Haider, and your crippled cub. God does not judge us (the corrupt) and like me he does not pledge allegiance to (corruption), so will Nasser help us?”

Al-Sadr raises the slogan of fighting corruption to justify his objection to the coordination framework taking the helm of the political process, after his withdrawal from it in June, but Iraqi observers and activists believe that the reasons for control and domination are behind Al-Sadr’s escalation, and that he is no better than his political opponents.

Al-Sadr is trying to impose his vision of a political settlement in Iraq, which puts the forces of the coordination framework in a difficult position between accepting its conditions, which will appear in the guise of the weak party, and challenging it, and this will lead to the crisis remaining open to bad scenarios.

To present himself as the savior of Iraq in the midst of a crisis of which he is a part, Al-Sadr announced on Monday a proposal to form an Iraqi government that does not include his current or the State of Law coalition led by al-Maliki, as a way out of the political stalemate.

The Kurdish – Iraqi Shafaq News Agency quoted an informed political source as saying that “the leader of the Sadrist movement, Muqtada al-Sadr, sent messages to the forces of the coordination framework, which included a proposal aimed at ending the political crisis in Iraq, by forming a new government without the participation of the State of Law coalition led by Nuri al-Maliki and not The Sadrist movement’s participation in it.”

He continued, “The government’s tasks will be for a period of one year only, during which it will prepare for early parliamentary elections in September of next year, and the prime minister will be consensual between the Sadrist movement and the coordination framework.”

According to the same source, al-Sadr has not yet received a response from the coordinating framework forces that include the major Shiite parties, including Asa’ib Ahl al-Haq led by Qais Khazali, the Wisdom Movement led by Ammar al-Hakim, and the Fatah and Nasr blocs led by Hadi al-Amiri and Haider al-Abadi.

But the response came from his opponent, al-Maliki, who refused to dissolve the Iraqi parliament and hold early elections, except after the parliament returned to meeting normally, while the coordinating framework had also indirectly stipulated Thursday ending the sit-in and vacating parliament before proceeding with new elections.

Al-Maliki considered the two in his speech that “no will can be imposed on it (Iraq) except the will of the entire people and through its constitutional institutions represented by the elected parliament.”

He added, “There is no solution to Parliament, no regime change, and no early elections except by the parliament’s return to meeting, and it is he who discusses these demands and what it decides, we proceed with, because Iraq’s system is a trust in all of us, and Iraq is only served by adherence to the law and the constitution.”

With the momentum of al-Sadr’s movements and the coordinating framework’s adherence to its positions, it does not seem any indication that the crisis that has marked a state of suffocation and a highly complex and sensitive situation has been resolved.

For about ten months, Iraq has been witnessing a political blockage against the background of the differing positions of the Sadrist movement and the coordination framework, which forms the political umbrella for the forces loyal to Iran, on the nature and form of the next government.

Al-Sadr, in a surprising move last June, announced his withdrawal from the political process and his bloc’s submission of its resignation from Parliament, before moving to mobilize his supporters and take his weight to the street.

Observers believe that the Shiite leader’s movement of his supporters is the last card in his pocket in the face of his opponents from the framework, especially Nuri al-Maliki, noting that the chances of success in passing this paper and imposing a new reality represented in the elections or not, seem equal.

They make it clear that the leaders of the framework may circumvent the demands of al-Sadr by adopting a policy of long-term self, and betting on weakening the will of al-Sadr’s supporters with the length of the sit-in. A large number of them refuse to engage in Lee’s ongoing arm game.

Since the early parliamentary elections in October 2021, Iraq has been in complete political paralysis with the inability to elect a new president and form a new government.

The elections resulted in a fragmented parliament, in which no party has an absolute majority, and the Sadr movement occupied 73 seats out of 329.

It is customary in Iraq that the parties of the “Shiite House” that have dominated the political scene since 2003 reach an agreement among themselves on the name of a prime minister.

This time, however, the political parties failed to achieve this after many months of negotiations. The main difference between the two parties is that the Sadrist movement wanted a “national majority” government in alliance with the Sunnis and the Kurds, while its opponents, in the coordinating framework, wanted to maintain the consensual formula.