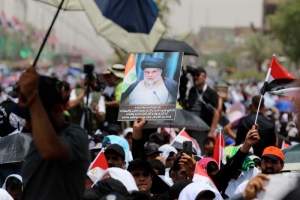 BAGHDAD – The crisis in Iraq is heading towards a search for political solutions, especially with the United Nations entering the crisis line, and the coordinating framework showing an openness towards the Shiite leader Muqtada al-Sadr’s call with preconditions that observers saw as unfair, with the end of the first week of his supporters’ sit-ins, which continue inside the Green Zone in Baghdad, Amid strict security measures, thousands of people flocked to the area to perform a unified prayer there.

Tens of thousands of supporters of Shiite cleric Muqtada al-Sadr performed Friday prayers in a famous arena for military parades in Baghdad, which was set up by the late President Saddam Hussein, in another symbolic display of the extent of Sadr’s influence on many of the Iraqi people.

Al-Sadr has a huge popular base of millions of Iraqis, and has shown that he can still mobilize crowds of hundreds of thousands, mostly working-class people, if he needs to apply political pressure.

Al-Sadr had called, in a speech from the southern Iraqi city of Najaf, on Wednesday evening, to dissolve parliament and hold early and fair elections, considering that dialogue is of no use. He stressed that his current protest movement “is not a struggle for power,” declaring that the movement will continue until its demands are achieved. He continued, “I will not start spilling blood, and if they do, reform requires sacrifice.” He also indicated that he has not yet decided to participate in the upcoming elections.

And on Thursday, the coordination framework issued a statement in which it affirmed its “support for any constitutional path to address political crises and achieve the people’s interests, including early elections, after achieving national consensus around them and providing a safe environment to hold them.”

The coordinating framework stressed that “all this must be preceded by work to respect the constitutional institutions and not to disrupt their work.”

“Our roof remains the law, the constitution, and the people’s interest,” he said in his statement.

The statement of the “Coordination Framework” did not provide more details about the meeting, nor did it respond to Al-Sadr’s demand to remove the “Al-Fateh Alliance” from the framework to start the dialogue.

The local “Shafaq News” agency quoted a source close to the framework as saying that the meeting “focused on the importance of forming the government headed by Muhammad Shia Al-Sudani,” noting that “the latter will undertake the task of preparing for early elections.”

Al-Sudani is close to Iran and former Prime Minister Nuri al-Maliki, and has previously held government positions, while the “Sadr movement” and other Iraqi forces are calling for the selection of a figure who has not held any positions.

The source added that “everyone agreed to authorize Hadi al-Amiri, head of the Al-Fateh Alliance, who is currently leading the coordination framework, as the oldest leader, to dialogue in the name of the framework or sit at one dialogue table with the leader of the Sadrist movement, Muqtada al-Sadr, in order to reach realistic solutions that end the political crisis.”

Al-Amiri intends to visit Al-Sadr in Al-Hanana in the city of Najaf, in the coming hours, to prepare a national dialogue in harmony with Al-Sadr’s demands and the position of the coordination framework regarding the dissolution of Parliament and the holding of new elections.

The Secretary-General of the Sayyid al-Shuhada Brigades (loyal to Iran), Abu Ala’ al-Walaei, revealed Thursday that “the most important decisions of the Coordination Framework meeting Thursday, the agreement not to renew the current Prime Minister Mustafa Al-Kazemi.”

Al-Wali said in a tweet on his Twitter account, “I salute the brothers in the coordinating framework for their responsible courage in their emergency meeting today, which was one of its most important decisions to agree not to renew Al-Kazemi, and to refuse to keep him as a settlement chief for the next stage.”

The position of the framework and the head of the “State of Law” coalition, Nuri al-Maliki, seemed to retreat from the tense positions they had issued during the past days, avoiding the language of escalation and mobilizing the street against the sit-ins of al-Sadr’s supporters, which indicates the easing of the escalation phase, and the trend towards political solutions.

Observers believe that the coordinating framework is well aware that consensus on holding early elections is difficult to verify, and that its demand to dismantle the sit-in of the Sadrist movement in front of Parliament may be an impossible condition, as escalating the street to which al-Sadr turned is a wake-up call for the political system unless it adheres to what al-Sadr wants. and seeks it.

Observers believe that the leader of the State of Law coalition, Nuri al-Maliki, and the leader of Asa’ib Ahl al-Haq, one of the Popular Mobilization factions, Qais al-Khazali, will be inhibiting the framework’s move towards early elections.

These observers point out that the condition of Al-Sudani assuming the task of preparing for early elections may not appeal to Al-Sadr, lest he continue in his position at the head of the government beyond what is agreed upon, and expel the elections for an unknown period.

And in a step that indicates the United Nations’ attempt to bring the views of the political parties closer, and after the head of the United Nations mission in Iraq, Jeanine Hennis-Plasschaert, pre-empted the coordination framework meeting and met the leader of the Fatah Alliance Hadi al-Amiri, she met al-Sadr on Friday morning in Najaf.

After a meeting that lasted about an hour, Plasschaert confirmed that her meeting with Al-Sadr was good. She told reporters after the meeting that she had discussed with him “the importance of finding a solution to the political crisis,” without any other details about the course of the meeting.

In recent days, Plasschaert held meetings with the leaders of the coordination framework, the last of which was Thursday with Al-Amiri, and before that she met the leader of the Al-Hikma Movement, Ammar Al-Hakim, and she also met the President of the Republic, Barham Salih, and Prime Minister Mustafa Al-Kazemi.

Faced with the dwindling of Al-Sadr’s chances of convincing his political opponents of his initiative, he rushed to send a message to the Popular Mobilization Authority, after its head, Faleh Fayyad, rejected his call to dissolve parliament and hold early elections.

In a lengthy statement he posted on Twitter on Thursday evening, Al-Sadr said, “There is a current camp and a tire camp. This does not mean that our beloved brothers in the popular crowd are affiliated with one of these two sides.”

He added, “I am sure that they share my opinion in what I said about the request for unity within the divine, religious and human ideological frameworks.”

He explained, “They, that is, the Mujahideen in the Popular Mobilization, are the closest to our opinions and adoptions by us (the Sadr family), but most of them refer in their imitation and all their actions to the two Sadrist martyrs (their pure souls sanctified).”

And from here, I greet them with the greeting of Islam, and I wish them steadfastness in the field of jihad, and that God unites us and them under the banner of the absolute truth, the owner of the era and time, and the master of reformers, Imam Al-Mahdi, explaining, “As they sacrificed for the sake of their country, they are fully prepared to defend reform and the absolute truth, if He wills.” God”.

He added, “I am fully aware of their courage and sincerity. They were among the soldiers of Iraq and the fighters under our banner, the Al-Sadr family, against the occupation. Rather, they are still from Iraq and to Iraq, and they do not accept dependence or loyalty to anyone but the savior and reformer of the family of the Messenger, may God’s prayers and peace be upon them all.”

Al-Sadr’s statement was welcomed by the popular crowd, which confirmed that it was ready to defend reform, in reference to its support for the sit-in of the current’s supporters in front of Parliament to pressure towards early elections.

The PMF said in a statement that it “praises the fair written speech of Muqtada al-Sadr addressed today (Thursday) to the Popular Mobilization Mujahideen.”

The statement added, “In this regard, the Hashd pledges to the leadership and members of the Iraqi people and the religious authority of its commitment to national and professional standards that serve Iraq.”

The political crisis in the country is still strong, as Iraq has been experiencing complete political paralysis since the legislative elections in October 2021. Endless negotiations between the major political forces did not lead to the election of a President of the Republic and the assignment of a Prime Minister.

While he exerts popular pressure on his opponents, al-Sadr left them the task of forming the government, after the Sadrist movement’s 73 deputies resigned last June from Parliament, even though they occupied, as a bloc, the largest number of seats in it.