Iraq.. Al-Sadr calls for regime change and the coordination framework warns of a coup and the security and military apparatuses adhere to impartiality

Iraq.. Al-Sadr calls for regime change and the coordination framework warns of a coup and the security and military apparatuses adhere to impartiality 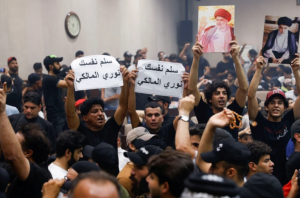 Muqtada al-Sadr, whose supporters are protesting in the Iraqi parliament, said that the opportunity exists for a radical change of the political system. While the coordinating framework described his statement as a coup attempt, the Ministry of Defense and the security services confirmed that their forces stood at the same distance from the people and that their leaders did not interfere in political affairs.

The coordinating framework said that any project to amend the constitution outside the constitutional frameworks is a threat to civil peace and the rule of law, and added in a statement that the Iraqi people, their clans and forces will not allow the constitutional constants to be violated by the masses of a single political bloc, and that it stands with the people in defending their rights, the legitimacy of the state and the political process. with all he can.

The coordinating framework described the escalation as reaching the point of calling for a coup against the people and the state, the political process, the elections, and the constitutional legitimacy that enjoyed popular reference and international support, and the people voted for it with its absolute majority.

The framework statement also stated that he continues to call for dialogue with all political forces, especially those he described as brothers in the Sadrist movement, based on his sense of legitimate and national responsibility and the importance of the historical moment that Iraq is going through, as he put it.

These positions come in response to statements by the leader of the Sadrist movement, Muqtada al-Sadr, in which he described the political developments that Iraq is witnessing as an opportunity to fundamentally change the political system, the constitution and elections, considering that the Iraqis today are “at stake.”

Al-Sadr added in a tweet on Twitter that “either Iraq will be lofty among nations, or it will be a vassal controlled by the corrupt and driven by foreign hands.” He called on everyone to support the revolutionaries for reform, noting that it is an “opportunity to dispel corruption, quotas and sectarianism.”

The leader of the Sadrist movement described the protests as “the spontaneous, peaceful revolution that liberated the Green Zone as a first stage,” considering it a “golden opportunity for all of the people stung by the fire of injustice, terrorism, corruption, occupation and dependency.”

Meanwhile, the Iraqi Ministry of Defense said that the duty of the security forces is to protect protesters and public and private property, and that the Iraqi army is at the service of the people.

She added in a statement, that the army, with all its leaders and members, stands at the same distance from the people, and that their duty is to prevent any security breach, and to tighten the noose around the intruders who try to destabilize security by exploiting these circumstances, according to the statement.

For its part, the Security Media Cell in Iraq denied what is being circulated about statements by security leaders regarding the political situation and their interference in it, and said in a statement, that it rejects the attempt to make the security forces part of the current political situation.

The Counter-Terrorism Service in Iraq also denied reports of the deployment of its forces on the Baghdad airport road or inside the Green Zone, stressing that its forces continue to achieve security and pursue terrorists and have no loyalty except to Iraq and its army.

This came in a statement issued by Farhan Haq, Deputy Spokesman for the Secretary-General of the United Nations.

“The Secretary-General appeals to all relevant actors to take immediate steps to de-escalate the situation, avoid further violence, and ensure the protection of peaceful demonstrators and state institutions,” the statement read.

Guterres urged all parties and actors to “rise above their differences and form an effective national government – through peaceful and inclusive dialogue – that meets long-standing demands for reform, without further delay.”

The European Union also expressed its concern about the escalation of the events in Baghdad, so the official spokeswoman for foreign affairs and security policy of the European Union, Nabila Masrali – in a tweet – called on all parties to exercise restraint, “to prevent further violence in Iraq.”