The smell of civil war in Iraq

The smell of civil war in Iraq 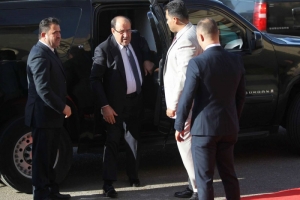 Events in Iraq are accelerating, suggesting that the country is on a steady pace toward civil war. Isn’t that what former Prime Minister Nuri al-Maliki talked about in the leaks that were distributed recently with his voice, which actually reflect his style of thinking and the degree of his intolerance… In addition, of course, about the extent of his loyalty to the “Islamic Republic” in Iran?

The smell of such a war seems to be a natural result of a nine-month-old political deadlock. The blockage has continued since the last parliamentary elections held by Mustafa Al-Kazemi’s government last October-October. Those elections were a success for the government and for Mustafa Al-Kazemi himself. However, this success turned into a disaster for Iraq in light of Iran’s rejection of the election results.

At that time, the forces loyal to Iran failed to obtain a majority in the House of Representatives, and signs of an alliance emerged between the Sadrist bloc, the Sunnis, and most of the Kurds represented by the Kurdish leader Massoud Barzani. This tripartite alliance distinguished itself from the “Islamic Republic” of Iran. He walked in the line of forming a “national government” that represented the majority in Parliament, away from quotas.

The tripartite alliance, by distinguishing itself from Iran, made the “Islamic Republic”, which considers itself the custodian of Iraq, to ​​go to great lengths in confirming that this country has become its property and its captivity cannot be broken. We witnessed how Iran in normal days refused any concession in Iraq, even though the events that have been going on for more than ten years, including the burning of the Iranian Consulate in Najaf, confirm that Iraq is Iraq while Iran is Iran.

It is certain that in this exceptional stage, Iran needs, more than ever, a hostage called Iraq. She won’t let him slip out of her hands in any way. Therefore, it was natural for a wing represented by Al-Maliki and “Asaib” to rush to put forward the name of Muhammad Shia Al-Sudani in order to be the next prime minister.

It is no secret that Al-Maliki sees Al-Sudani as just a front for him. It is clear from the leaks that the hatred of the former prime minister, who is one of the leaders of the Islamic Dawa Party, has no limits against Muqtada al-Sadr, who did not leave an occasion when he declared that he was an Iraqi first… and that despite the major lapses he committed.

From the political deadlock that has been going on for nine months… to Sadr’s supporters storming the headquarters of the Iraqi parliament to reject the arrival of Al-Sudani, Al-Maliki’s man, to the position of prime minister… through the inability to elect a new president to succeed Barham Salih, we cannot talk about a normal situation in Iraq. Every step that leads to the Iraqis’ restoration of Iraq seems to be a meaningless step, but rather a step in a vacuum.

The birth of the current regime in Iraq, an unviable regime, was not a coincidence. It is an Iranian-made regime that all the time needs the intervention of the “Revolutionary Guard” or whoever represents it to prove that Iraq is an Iranian card and nothing else.

Recent developments, including Mustafa Al-Kazemi’s participation in the summit in Jeddah with President Joe Biden in which the leaders of the Gulf Cooperation Council countries, King Abdullah II and President Abdel Fattah al-Sisi participated, were emptied of their content.

It became clear, a few days after the summit, that Iraq is in an unenviable situation and that it is difficult for the “Islamic Republic” to allow it to be a normal country that constitutes an element of balance in the region. This is because Iran itself is not a normal country that can live in peace and security with other countries in the region and with the civilized world.

Regardless of whether Muqtada al-Sadr, who made his deputies in Parliament submit their resignations, was right or not, and regardless of whether he served Nuri al-Maliki, Iran and its divided parties, the problem at hand in Iraq remains very simple. Muqtada al-Sadr did not leave him with any other option than to escalate. This means that it is in direct confrontation with Iran, which sent Esmail Qaani, commander of the Quds Force in the Iranian Revolutionary Guards, to Baghdad.

Holding Iraq at the present stage seems a matter of life and death for the Iranian regime. This explains the pressures that Qaani is exerting from inside Baghdad to keep Iran’s allies, in the coordination framework, united.

Mustafa Al-Kazemi seems right when he talks about a “critical and sensitive” situation in Iraq. Moreover, it seems clear that Iraq is heading to a dangerous stage at a time when it is not known whether it is possible to form a government that Muqtada al-Sadr and his supporters object to, and whether it is possible to hold new legislative elections in the current circumstances.

What we are witnessing is the crisis of a regime that was born out of the womb of the American occupation in 2003. This regime was based on the ideas of “federalism” and “the Shiite majority,” according to the statement issued by the London conference of the Iraqi opposition in December 2002. That was about four months ago. Almost from the fall of the regime headed by Saddam Hussein in Baghdad.

Today, more than ever, the crisis of the existing regime in Iraq is unfolding. It is a crisis of an unviable regime, based on sectarian and regional quotas. The regime was established under an American-Iranian understanding in order for it to be so.

At the London Conference of the Iraqi Opposition, Iran was running the game and the Americans were relieved that it had brought them most of the Iraqi opposition representatives in one plane that came from Tehran.

The birth of the current regime in Iraq, an unviable regime, was not a coincidence. It is an Iranian-made regime that all the time needs the intervention of the “Revolutionary Guard” or whoever represents it to prove that Iraq is an Iranian card and nothing else. All of this is happening while America, which launched a war for change in Iraq, finds nothing to do but watch!

America is watching… As for Iran, where there are internal disputes over the Iraqi situation and the allies of the sectarian militia leaders, it faces daily a big question: Why do the overwhelming majority of Iraqis refuse to bow to the colonialist coming from Tehran?