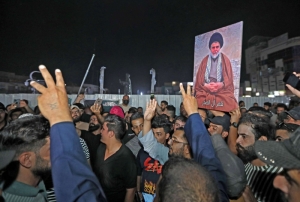 BAGHDAD – The leader of the Wisdom Movement, Ammar al-Hakim, left the gray area in which he sought shelter following his severe loss in the legislative elections that took place last October, to announce that he is in the same boat with the leader of the State of Law coalition, Nuri al-Maliki, in the raging conflict between him and the leader of the Sadrist movement, Muqtada al-Sadr.

Al-Hakim has been keen over the past months to appear neutral, despite his belonging to the coordination framework, and he has presented a number of initiatives to solve the crisis between the Shiite parties, but these initiatives were only recording a position and none of those concerned took them seriously.

Observers believe that the recent developments, especially after the supporters of the Sadrist movement crawled into the Green Zone and stormed the parliament, prompted al-Hakim, as well as some leaders of the coordination framework, to reconsider their orientations and to mobilize on the side of al-Maliki, in light of their sense of the danger of conceding to al-Sadr’s conditions, which will not only end with breaking al-Maliki politically, but They will also attend.

The head of the Wisdom Movement said that he would not stand idly by in front of the voices of sedition and plunge the youth into chaos, announcing his adherence to the nomination of Muhammad Shia Al-Sudani for prime minister.

Ammar al-Hakim: We will not stand idly by in front of the sounds of sedition and the entrapment of young people into chaos

Al-Hakim explained in a speech to his supporters in the capital, Baghdad, “We have witnessed during the past weeks many attempts to sow discord and animosity between the components of the people on the one hand and within the larger social component on the other hand. Brothers and sons of the same house.”

He added, “We will not stand idly by in front of the attempts of hatred and the voices of strife and the involvement of our youth in conflicts and chaos, for Iraqi unity is a red line and we will not tolerate that at all, and we will not allow the fingers of the soft war to affect our people or fuel the differences, challenges and sensitive conditions we are going through in achieving its malicious goals.” .

Al-Hakim called for “there to be a clear and public mechanism before the people in choosing the president of the republic and not to keep this behind the scenes and closed meetings to get rid of personalizing matters and aggravating positions. It is produced by Parliament in a specific and near time, as happened in the selection of the Prime Minister by the coordinating framework forces with a high level of responsibility and self-denial from the leaders of the first row and a number of leaders of the second row.”

It seemed clear that Al-Hakim’s criticism of the Kurdish party was directed mainly at the Kurdistan Democratic Party, which closes the door to any efforts to reach a consensual candidate with the PUK, in addition to his reservations about attending the presidential election session, and it is required that this be preceded by an agreement to support its candidate, Reber Ahmed.

Observers pointed out that Al-Hakim’s talk about how the Shiites were chosen confirms that the leader of the Wisdom Movement, as well as the rest of his allies in the framework, is not in the process of retracting the assignment of this figure close to Al-Maliki, because they realize that the main problem does not lie in the Shiites, but in Al-Sadr’s refusal to achieve what his opponent Al-Maliki failed to achieve. It is about him, and he is the formation of the next government, and therefore the leader of the Sadrist movement will not accept any settlement without ensuring that the head of the State of Law coalition is removed, and this is not possible.