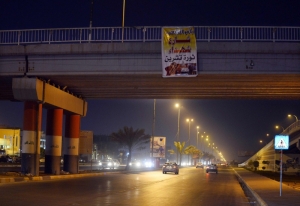 The defeat of the ruling political class in Baghdad is possible, but it is only a matter of time. That is what the young protesters are determined to withstand.

It is true that the region is under siege, and that the siege can only be lifted by killing, which the armed authorities have not hesitated to do. .

The animosity between the protesters and Iran has been declared and transcended the issue of protesting the survival of the regime, which is Iran’s agent inside Iraq.

The protesters were clever in dealing with that hostility.

This has irritated the Iranian regime, especially Khamenei, and made them feel they are facing a new awareness of the Iraqi issue. That consciousness was characterized by its clarity and freedom from the sectarian and ethnic dimensions. Iraqis today do not address the issue of their freedom out of ethnic or sectarian hatred, but the issue deeper and more comprehensive and broader.

For the young people who took to the streets in protest, the ethnic and sectarian identity of the occupier did not concern them.

All this means that the protesters seek to restore their homeland by freeing it from the sectarian fabrication that it placed under Iranian sovereignty. After the religious parties revealed their complete allegiance to Iran and their dependence on the jurist, the talk of a sectarian majority is no more than hypocrisy, in which Iranian hegemony is intended to be a fait accompli.

If the demonstrators from the first day were dropped from the sectarian state, they cut short the way to Iran as its official sponsor. They have broken through all the red lines to the last line, which the political class in Iraq still believes is the last block if it is threatened.

Protesters in the October Revolution went far beyond what Iraqi politicians imagined would be for the Iraqi people to reach. Today, the young uprising cannot accept government reforms or even the resignation of the government, as much as they think of ending the political system based on Iranian subordination.

Khamenei described what is happening in Iraq as a riot and knows very well that his words do not carry a grain of honesty. Perhaps he had to look for the means to negotiate with the protesters, since he was personally intent on the protests. He will be forced to do so after it is confirmed that the means to be followed by his followers will not work to extinguish the flames of Iraqi anger but will increase them.

There is no end to Iraq’s sectarian system until Iran is convinced that its influence in Iraq no longer has domestic cover. This is what peaceful revolutionaries seek, who feel that the defeat of the political class is only a matter of time.

Iran will seek to save its situation in Iraq and will fail in its endeavor. This is because it is considering saving the political class to save its project. This is a mistake you will pay for in the future of its relationship with Iraq.