Barzani leaves Baghdad empty-handed: No agreement is expected on oil

Barzani leaves Baghdad empty-handed: No agreement is expected on oil 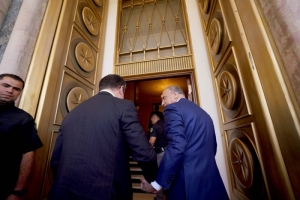 The visit of Kurdistan Regional Government Prime Minister Masrour Barzani to Baghdad did not succeed in achieving any breakthrough in the oil and gas file, despite statements by Iraqi officials that were not without diplomacy in terms of stressing the importance of strengthening the dialogue approach to reach a settlement.

Baghdad – Kurdish political circles said that the visit of the Prime Minister of the Kurdistan Region, Masrour Barzani to Baghdad, did not result in any actual breakthroughs in the contentious issues between the two parties, especially with regard to the oil and gas file, in light of the two parties’ adherence to their position.

These circles warn that the continuation of disputes between Baghdad and Erbil over oil and gas will have serious repercussions, as it disrupts the investment climate in this sector, especially with a number of Western companies expressing their intention to withdraw and some of them announcing the suspension of new projects they intended to undertake within the region.

On Saturday, Barzani moved to the Iraqi capital, Baghdad, on his second visit since taking office nearly three years ago, as the oil and gas file topped the visit’s agenda. The Prime Minister of the Kurdistan Regional Government, which has enjoyed autonomy since the 1990s, held meetings with Prime Minister Mustafa al-Kazemi, Iraqi Parliament Speaker Muhammad al-Halbousi, and the head of the Supreme Judicial Council, Faiq Zaidan.

A statement issued by Al-Kazemi’s office announced that it was agreed to “deepen dialogues between the Federal Ministry of Oil and the Ministry of Natural Resources in the region, to address outstanding issues, continue work to reach common solutions, and achieve a state of integration in managing the oil file.”

After his meeting with Barzani, who was also attended by the head of the Sunni resolve alliance, Khamis al-Khanjar, the Speaker of the House of Representatives considered that the opportunity is favorable to resolve all differences and outstanding issues between the federal government and the Kurdistan Regional Government, including the issue of oil and gas.

On the other hand, Barzani did not issue any position on his visit to Baghdad, and the Kurdish political circles clarified that this is due to the fact that the visit of the Prime Minister of Kurdistan was not up to expectations, as the central authority in Baghdad adheres to its vision of a settlement based on the implementation of a court decision. The Federal Supreme Council last February, which provides for the delivery of oil produced on the territory of Kurdistan to the central government, granting Baghdad the right to review and cancel oil contracts with the region.

The Federal Court, which is the highest judicial authority in Iraq, considered at the time that the law approved in Kurdistan in 2007 to regulate the oil and gas sector was contrary to the constitution.

The Kurdistan Oil Law stipulates that “the Ministry of Oil in the region or whoever it authorizes is responsible for organizing and supervising oil operations… as well as all activities related to them, including oil marketing, as well as negotiating and concluding agreements and implementing all licenses, including oil contracts concluded by the regional government.” .

The Iraqi central authority refuses to recognize this law, and the decision issued by the Federal Court has formed a strong support in the legal confrontation with the region, which seems to be heading towards escalation.

Based on a lawsuit submitted by the Iraqi Oil Ministry, a court in Baghdad in early July canceled four contracts between the Kurdistan region and Canadian, American, British and Norwegian companies.

It is also possible that the cancellation will affect three other foreign companies, the decision on which is expected to be decided by the same court, as a senior official in the oil sector in Baghdad warned in an interview with Agence France-Presse, preferring to remain anonymous.

According to a statement by the Iraqi Ministry of Oil issued earlier this month, the American oil field service companies, “Schlumberger”, “Baker Hughes” and “Halliburton” pledged that they would comply with the ruling of the Federal Supreme Court and withdraw from the Kurdistan region.

The ministry statement added that the three companies confirmed that they will not start new projects in the semi-autonomous region, and that they are in the process of “liquidating and closing existing tenders and contracts.”

The Iraqi Ministry of Oil had appointed the international law firm Cleary Gottlieb Steen and Hamilton to communicate with some oil and gas companies operating in the Kurdistan region, “to start discussions to bring their operations in line with applicable Iraqi law.”

Observers believe that the response of some Western companies to the demands of the central authority in Iraq, which raised the concern of the Kurdistan leadership, is what made the KRG move towards opening negotiation channels with the Iraqi side, but it seems that the latter refuses to reach a solution that satisfies both parties.

The region had previously presented a proposal to establish two companies involved in oil exploration and marketing, working in partnership with Baghdad, but the latter did not respond to this offer.

Observers say that the best solution lies in agreeing on the legislation of the Oil and Gas Law of 2007, which is still locked up in the Iraqi parliament to draw up the common oil policy.

They point out that it is unlikely to see any settlement on the oil dispute between the region and the central authority, at least before the end of the political crisis that has afflicted Iraq since last October, and the formation of a new government.

Iraq is the second largest oil country in the Organization of Petroleum Exporting Countries (OPEC), and it exports an average of 3.3 million barrels of crude oil per day. As for Kurdistan, it produces more than 450 thousand barrels per day.

On the other hand, there are no official statistics on oil exported from the Kurdistan region, but the Iraqi Oil Ministry published an analysis last May in which it said that the regional government had committed “legal and procedural violations” in the sale of oil that caused great losses.

On the other hand, the regional government signed on itself, through production-sharing contracts, a contractual commitment to exempt contractors from taxes, and allowed them to inflate their profits without imposing any kind of taxes or sharing those inflated profits, especially when global oil prices rose.

She added, “The Ministry of Oil would also like to clarify that the region did not adhere to the quotas allocated to Iraq under the “OPEC” agreements, which negatively affected the quantities of oil allocated to Iraq from the central and southern fields, and therefore negatively affected the financial returns of the federal government, despite bearing its burdens by securing the salaries of its people. in the region.”

The region rejects such accusations, stressing that the price difference is a result of the pressures that the Iraqi Oil Marketing Company “SOMO” has exercised and is still exerting against companies operating in the region, and that the partnership contracts signed by the Kurdistan region have nothing to do with the cost of extraction and production, and have nothing to do with the dispute. current between the two parties.