Iraq: a mini-committee within the “framework” to nominate candidates for prime minister

Iraq: a mini-committee within the “framework” to nominate candidates for prime minister 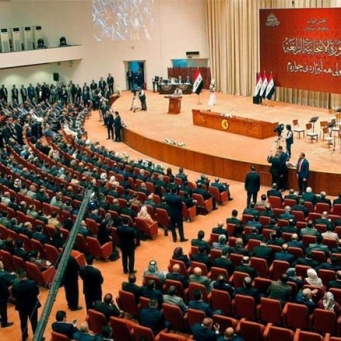 The extraordinary meeting held by the forces of the “Coordination Framework” coalition in Baghdad, and continued until late Tuesday evening, led to the formation of a mini-committee within the coalition, comprising representatives of its blocs, to choose the candidate for the new prime minister.

This reveals the failure of the meeting to reach an agreement on a specific name, and to refer the matter to the committee whose work may expand in the coming days to be a negotiating party for the alliance with the rest of the other blocs, according to what its members confirmed to Al-Araby Al-Jadeed.

The “Coordination Framework” alliance, which includes the political blocs and forces allied to Iran, is moving on the grounds that it is the largest bloc within the House of Representatives, after obtaining the majority of the Sadrist bloc’s deputies, which makes it the main actor in the process of forming the new government. This is the first time in post-2003 Iraq that the process of forming the new government is taking place, without the participation of the Sadrist movement, with its withdrawal from the Iraqi parliament and the entire political process.

Asmaa is proposed to head the Iraqi government, and the
leader of the coalition, Ali Al-Fatlawi, said, in an interview with Al-Araby Al-Jadeed, that “the coordination framework meeting, which lasted for hours in Baghdad on Tuesday night, ended with an agreement to form a committee that includes the leader of Asa’ib Ahl al-Haq, Qais al-Khazali, and the leader of the Wisdom Movement Ammar. Al-Hakim, the leader of the Islamic Supreme Council, Hammam Hammoudi, and the leader in the Virtue Party, Abdul-Sada Al-Fariji, and this committee will present in its report to the leaders of the coalition several names of his candidate for the position of prime minister.

The chances of Muhammad Shia Al-Sudani and Qasim Al-Araji, the largest among the names proposed to head the government

Al-Fatlawi revealed that several names were put forward to head the new government, and he said that “they are being discussed in the committee, namely Haider al-Abadi, Muhammad Shia al-Sudani, Abdul-Hussein Abtan, Ali al-Shukri and Qasim al-Araji, and new names may be added in the coming hours. This matter is in the hands of the committee and its members agree on this matter.” “.

He added that “the coordination framework is serious and determined to nominate the new prime minister in the coming days,” stressing that “the name that will be nominated and chosen within the coalition will take into account the position of the rest of the political parties on it, as well as the regional and international position on this nomination.”

The Iraqi Parliament (Ahmed al-Rubaye/AFP)
Arab reports
Choosing the president and prime minister in Iraq: No agreement ends the differences
The leader in the “coordinating framework” said that “the Kurdish forces should agree quickly on a candidate for the position of the presidency, so that there are no obstacles left It delays the process of forming the new government, as the framework wants to form the entire government within the next few days.”

However, political sources in Baghdad confirmed to Al-Araby Al-Jadeed that the chances of Muhammad Shia Al-Sudani and Qasim Al-Araji are the greatest among the names presented so far, knowing that the formed committee that will propose the names will be followed by another voting mechanism within the coalition, and whoever gets the highest votes will be the coalition candidate.

For his part, the leader of the Kurdistan Democratic Party, Mahdi Abdul Karim, told Al-Araby Al-Jadeed that his party “does not have a veto on any candidate for prime minister from the names presented so far.”

And he indicated that “the position of prime minister is an entitlement to the Shiite political blocs, and what concerns us primarily the government program and not the people, there must be a government program according to which crises and disputes can be resolved, especially between Baghdad and Erbil in accordance with the constitution.”

And regarding the Kurdish-Kurdish dispute over the presidency, Abdul Karim confirmed that “dialogues are continuing with the Patriotic Union of Kurdistan to resolve this dispute and reach an agreement that satisfies both parties, to proceed with the election of the President of the Republic with one candidate who brings together the Kurdish House,” noting that “the next few days will reveal the results of These dialogues, which began during the past hours.

Conditions for participation in the next government
For his part, the prominent member of the “Sovereignty” coalition, representing the Sunni Arabs in Iraq, Hassan al-Jubouri told “The New Arab” that they will vote for any candidate agreed upon by the Shiite forces to head the government.

Al-Jubouri explained that “our most prominent conditions and demands are to speed up the process of returning all the displaced to their areas of origin, speeding up the reconstruction of the liberated cities, revealing the fate of the disappeared, as well as lifting the injustice of many detainees, and other demands that will be a negotiating paper for us in the coming days with the rest of the political parties “.

The political crisis in Iraq entered a new turning point after the Sadrist bloc’s representatives (73 deputies) submitted their resignations from Parliament, and the leader of the Sadrist movement, Muqtada al-Sadr, withdrew from the political process.

Although the “coordinating framework” announced the end of the political blockage in Iraq, following Al-Sadr’s decision to leave the political process, so far the coalition parties have not engaged in any official negotiations with the main Arab Sunni and Kurdish political blocs and parties previously allied with Al-Sadr, or the independent representatives. and civil blocs, to form the new government.

Commenting on these developments, political analyst Ahmed Al-Sharifi said, in a telephone conversation with Al-Araby Al-Jadeed, that “the formation of a special committee by the coordination framework to choose the prime ministerial candidate confirms the great disagreement between the framework forces on this matter.”

He added, “Differences may engulf this committee in the coming hours, especially since some of the names nominated by the framework had a veto from the leader of the Sadrist movement Muqtada al-Sadr in advance, that is, before he withdrew from the political process.”

Al-Sharifi expected that “there will be regional and international factors that will be the main actor in the coming days to resolve the issue of naming the new prime minister and the entire process of forming the new government,” considering that “the role of the coordinating framework and all other political forces will be weak in the face of these regional and international actors, especially after the signs The United States is returning in force to the Middle East.”