What are the dimensions of the Iraqi prime minister’s visit to Washington?

What are the dimensions of the Iraqi prime minister’s visit to Washington? 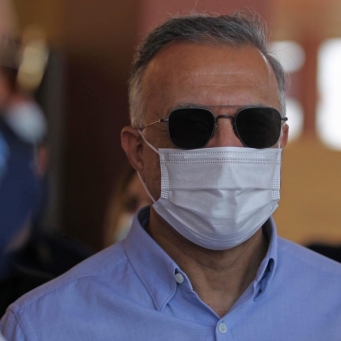 Iraqi Prime Minister Mustafa Al-Kazemi is preparing for a visit expected next weekend to Washington, in conjunction with an atmosphere of tension and ambiguity that prevails between the two countries, specifically with regard to the US military presence, while observers are likely to top the issue of Iranian influence in Iraq the scene of the talks between the two parties.

A White House statement stated that US President Donald Trump will receive the Iraqi Prime Minister on August 20 to discuss the challenges resulting from the Corona virus epidemic, security, energy and economic issues.

Perhaps the White House’s description of the visit as coming at a crucial stage for the United States and Iraq alike, gives the impression that the decision-maker in Washington is seeking to find a decisive solution to the problem of the armed factions loyal to Iran in Iraq, where observers see that this appears as a condition of Washington in providing Support for Iraq, but at the same time it puts Al-Kazemi in front of major challenges that he may not be able to overcome, but another hypothesis indicated by observers is that the role of Al-Kazemi may not deviate from the framework of transmitting messages between Washington and Tehran, in an attempt to formulate understandings between the two parties that may include formulating a type From the settlement inside Iraq.

In the same context, professor of political science at the University of Baghdad, Iyad Al-Anbar, identifies two tracks for the upcoming meeting between Al-Kazemi and Trump. The first is that the Iraqi Prime Minister unilaterally conducts a serious dialogue with Washington to resolve the main files, and gives the impression of the American decision-maker that he is a strong and reliable partner. The second track is for Al-Kazemi to be satisfied with the task of receiving messages, and it is likely that the second track will be the closest.

Al-Ambar believes that “the purpose of the visit to Washington is not only related to the talks between the two parties within the framework of strategic dialogues. Rather, the American president would like to discuss ways to weaken Iran in the region before the next US elections,” noting that “Washington realizes that the dismantling of Iranian influence in the Middle East must To start with Iraq, which was the starting point for the growth of this influence from the ground up.

Al-Ambar added to “The Independent Arabia”: “The American administration wants to know the extent of Al-Kazemi’s ability and willingness to manage the file of the conflict with the armed factions, which seems even without a road map to resolve all these problems.”

Concerning the connection of the early elections file with that visit, Amber notes that “setting the date for elections by Al-Kazemi was an attempt to evade other obligations related to holding the protesters’ killers accountable and restricting weapons to the state’s hands, which might give Washington the impression that Al-Kazemi does not have a vision to resolve these problems. ”

Observers believe that although Al-Kazemi does not intend to enter into an axis hostile to Iran, but he is moving towards trying to draw new boundaries for the relationship with it, and to reinforce the perception that Tehran’s interests in the country are linked to a strong Iraq that is open to the international community, but this matter may collide with the desire of the armed factions. Want to enter as an actor in managing Iraq’s external relations.

Despite the Iranian conviction to give Al-Kazemi a chance, the armed factions continue to hint at the issue of revenge for the assassination of the Iranian Quds Force commander, Qassem Soleimani, and the deputy head of the Popular Mobilization Authority, Abu Mahdi Al-Muhandis, in the face of Al-Kazemi, which observers see as part of the carrot and stick game practiced by Tehran.

The writer and journalist Ahmed Hussein says that “the attempt to open up to the Gulf, even if it was limited to cooperation in the energy file, struck a warning bell in Tehran about the possibility that Iraq will give up part of the understandings with it in this context.”

Hussein added to “The Independent Arabia”: “Despite Iran’s understanding of a new approach in Iraq, it will continue to press through its allies regarding the American presence.” It is likely that Tehran will use the constant threat to remove the American forces to obstruct Al-Kazemi’s efforts to formulate understandings with Washington that may. Affect their interests.

Conditions for accepting the results of the negotiations

Although the first round of dialogues resulted in an agreement to reduce the number of American forces in the country and respect the decisions of the Iraqi parliament, the armed factions loyal to Iran seem insistent on including the scheduling of the withdrawal of US forces as a prerequisite for accepting the results of any negotiations between the two sides.

In conjunction with the announcement of the date of Al-Kazemi’s visit to Washington, the leader of the “Asaib Ahl al-Haq” movement, Qais Khazali, in a televised speech, linked the demilitarization of cities and the removal of American forces from the country.

Khazali continued, “We pledge to the leaders of victory (Qassem Soleimani and Abu Mahdi Al-Muhandis) to expel the American forces from the country,” what observers see as a clear message to Al-Kazemi ahead of the upcoming visit to Washington.

Hussein notes that “Khazali’s statements also fall within the messaging war between Washington and Tehran, and include a clear message to the prime minister that Iraq’s foreign relations must be formulated according to a vision in which the pro-Iranian parties have a decisive word.”

Restoration of the rift between Baghdad and Washington

On the other hand, sources close to Al-Kazemi’s government confirm to “The Independent Arabia” that the visit comes to repair the rift that occurred in the relationship between the two countries during the reign of the resigned Prime Minister, Adel Abdul-Mahdi.

The sources indicate that “the dialogues will include cooperation in the fields of the economy, especially with regard to getting Iraq out of the financial crisis that it is suffering from, as well as solving the electricity crisis,” pointing out that “the Iraqi government is looking forward to Washington’s support to overcome these two problems,” which may be The United States is using it to impose conditions on the Iraqi government regarding countering Iranian influence.
And on cooperation in the security file, the sources indicated that “Al-Kazemi will discuss with Washington the possibility of providing assistance in the context of strengthening the security forces, and intelligence and security cooperation with the American army.”

According to the sources, Al-Kazemi will also discuss ways to reach a final agreement on a gradual withdrawal of US forces.

Al-Kazemi tries to avoid entering the axes of the ongoing conflict in the region, according to the same sources, but it is a test that his predecessor failed, as it seems that this does not appeal to both Tehran and Washington, which are trying to attract Iraq to their fronts.

The sources pointed out that “the dialogues are not related only to the strategic agreement, but to Iraq’s search for a long-term partnership with Washington in economic, security and political issues,” while revealing that “the completion of the second phase of the strategic dialogue will take place on the sidelines of that visit.”

This visit comes after several rounds of clash between Al-Kazemi and the armed factions, the last of which was the arrest of Kataib Hezbollah operatives following what was then called the “Katyusha cell,” but they were soon released, which shows the growing influence of these factions to The limit that puts the Al-Kazemi government in front of a difficult test regarding the possibility of dismantling it, which leads observers to indicate that the visit will be limited to trying to neutralize Iraq from the conflict of axes in the region.

For his part, writer and journalist Mustafa Nasser believes that “Al-Kazemi’s visit to Washington is calculated in terms of timing and arrangement, especially since it came after a visit to Tehran and postponing his visit to Saudi Arabia,” indicating that “the main dimension of that visit is to restore the old approach to Iraq by moving away from the policy of the axes. “.

Nasser continues, “The other dimension of the anticipated dialogue between Washington and Baghdad revolves around the intention of the Al-Kazemi government to reactivate the Strategic Framework Agreement signed in 2010 as a basis for governing the relationship between the two parties.”

Researcher and academic Basil Hussein considered Al-Kazemi’s visit to Washington “an important step towards opening up Iraq to the international environment,” describing that visit as “the end of estrangement and stagnation in the relationship with Washington, which lasted for about three years,” adding to “The Independent Arabia” that “the visit schedule It gives the impression that several files will be dealt with, foremost of which is the American presence in Iraq.

Commenting on the visit’s coincidence with Khazali’s recent statements, Hussein clarifies that “the state’s policy and its foreign decision should be limited to those who officially represent it, and not be affected by the will of the parties or militias.”