What are the obstacles to early elections in Iraq? Why do some MPs fear it?

What are the obstacles to early elections in Iraq? Why do some MPs fear it? 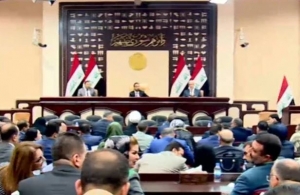 “Some representatives are working to delay the election date as much as possible.” Thus, legal expert Tariq Harb summarizes the secrets of what is going on under the dome of the Iraqi parliament, while the street awaits the date of early elections on the impact of renewed demonstrations, and Prime Minister Mustafa al-Kazemi’s commitment to conducting them.

He attributes the war of the position of deputies opposed to the early elections to their “fear of losing their seats and their desire to stay longer in parliament, at a time when Iraq is boiling on a hot tin in the wake of the popular protests sweeping the country since last October, which was one of its main demands to change a law Electoral Commission and the elimination of corruption and unemployment

Hypothetical dates
While the House of Representatives enacted a new election law, controversy continues over some of its paragraphs; Opinions are divided regarding the most appropriate time to hold early elections, as the Kazemi government considers it possible in early October 2021, while political parties affirm – including the “Marchers” bloc led by Sadrist leader Muqtada al-Sadr and the “National Forces” coalition led by the Speaker of Parliament Muhammad al-Halbousi – That early April of next year is the best date, and the United Nations Representative in Iraq, Hennes Blashardt, has suggested that elections be held in June.

Al-Kazemi’s government is reassured that preparations for the early elections are going well, and that “fair and fair elections are a political decision first and foremost, and there are no compelling obstacles,” according to the adviser to the Prime Minister for election affairs, Dr. Hussein Al-Hindawi.

Al-Hindawi explained to Al-Jazeera Net that “early elections are possible in Iraq within a period of time that does not exceed a year, provided that the necessary requirements are provided, including completing the election law, as well as preparing the election commission, providing financial allocations, strengthening supervision, control, transparency, and generalizing electoral awareness at all popular levels.” .

For his part, the “Iraqis” coalition led by the head of the al-Hikma movement, Ammar al-Hakim, is seen by observers who have been formed to support the al-Kazemi government; Holding early parliamentary elections is the best way to get Iraq out of its crises, despite some of the difficulties it faces.

The head of the parliamentary bloc in the alliance, MP Hisham Al-Suhail, told Al-Jazeera Net that “the problems are mainly technical, where elections cannot be held at the level of the judiciary to overlap some districts in terms of population, and differences in some governorates on the administrative borders of these districts, stressing that his alliance is working to find solutions For example, the holding of elections is according to what is known as the intermediate constituencies, i.e. the province is divided according to its size into 3 or 4 departments in order to overcome technical problems.

Despite the approval of the formula of multiple districts at the governorate level within the new election law, the annex to the districts tables that will witness the poll is still under consideration in the Ministry of Planning, as well as the existence of differences between Arabs and Kurds over the boundaries of many districts within the strip separating the disputed areas.

Member of the Finance Committee in the House of Representatives Ahmed Hama Rasheed told Al-Jazeera Net that most political opinions are agreed that elections take place in the middle of next year, that is, after about 10 months from now, and until this time the funds may be available, especially as the election law and the tables attached to it will be subject to discussion Once again, indicating that Parliament is currently in a legislative holiday, and the new legislative term begins next September, and all of this needs more time.

Al-Lami saw the possibility of holding early elections within 5 to 6 months in the event of a political will (Al-Jazeera)
The parliament was dissolved
from his side, former Chairman of the Electoral Commission Council Adel Al-Lami believes that early elections are possible within 5 to 6 months, provided there is political will In dissolving Parliament for itself, an enforceable law, as well as completing the quorum of the Federal Court, in order to approve the election results.

Al-Lami told Al-Jazeera Net that “the elections need a financial budget allocated to the commission, in the range of 250 to 300 million dollars, as was the cost in the last elections.”

The Federal Supreme Court that is specialized in examining constitutional disputes is unable to convene due to the referral of one of its nine judges to retirement, and the lack of a clear mechanism to compensate him, as it is incumbent on them to ratify the elections and the validity of the membership of members of Parliament and to consider appeals against the results.

According to the law of the Federal Court that administratively follows the Supreme Judicial Council, the quorum is complete with the presence of a president and 8 members, and it is not valid until the presence of all its members. Otherwise, everything issued by it is not binding.

Commenting on this, legal expert Tariq Harb confirms that “the previous court law issued in 2005 with number 30 is still in force, and it is possible to amend the third article of it by a simple majority, where a member may be appointed to complete the quorum of the court, instead of waiting for the new court law that stipulated a two-thirds majority, Any approval of 220 deputies, and it can be adopted in a very short period not exceeding 10 days.