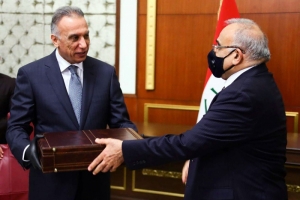 BAGHDAD – The United States believes that the current stage is best suited to encourage Iraq to fortify its political decision, in light of Iran’s internal retreat due to the Corona pandemic and the US economic sanctions that have had catastrophic repercussions in Tehran.

According to officials at the Iraqi Ministry of Foreign Affairs, communicating with the US State Department, Washington’s assessment indicates that Iran has received a tremendous shock during the past two months, which was the inability of the militias loyal to it to invest the annual budget surplus in Baghdad to finance its projects in Iraq.

And previous Iranian estimates that oil prices will increase at a higher rate than the Iraqi budget forecasts, that the surplus will be available for armed militias to compensate for Tehran’s inability to provide the necessary support to it, due to US sanctions.

Now, with Mustafa al-Kazemi – who is classified as one of the worst militia enemies – assuming the presidency of the Iraqi government, it appears that financing the plans of Iran’s allies in Iraq is surrounded by great danger.

The concerns of the Iranians do not stop at this point, as Al-Kazemi prefers cooperating with the United States and the Gulf, frankly, on a tiring partnership with Iran, which could place his country within the circle of the internationally angry.

Parliament Speaker Mohammed Al-Halbousi clearly expresses the direction that Iraq must take sooner to face the repercussions of the economic crisis caused by the collapse of oil prices, saying that Baghdad cannot dispense with the international community.

Al-Halbousi adds that if Iraq wants urgent financial aid to secure the salaries of its employees, he will not find it in Iran, but rather in the Gulf, West and the United States.

After a call he received from US Secretary of State Mike Pompeo and explicit support positions from Britain and the European Union, the Saudi position came to express the features of a new stage between Baghdad and Riyadh under the Al-Kazemi government.

The Saudi crown prince, Prince Mohammed bin Salman, affirmed his country’s support “for what Iraq achieves for its development and security and its keenness to strengthen relations between the two countries.” This came during a phone call made by the Saudi Crown Prince with the Iraqi Prime Minister on the occasion of forming the new government.

The Saudi crown prince expressed his “congratulations to the Iraqi Prime Minister and the wishes of Iraq and its people for development and prosperity.”

Political sources in Baghdad say that the phone call between Prince Muhammad bin Salman and Mustafa Al-Kazemi may launch a period of close cooperation between Baghdad and Riyadh. The sources said that Al-Kazemi received an invitation from the Saudi Crown Prince to visit Riyadh, so that Saudi Arabia would be the first neighboring Arab country to submit an invitation to the head of the new Iraqi government.

Al-Kazemi and the Saudi crown prince have a close personal relationship dating back to the era when the current Iraqi prime minister assumed responsibility for managing the intelligence service, the summer of 2019.

Al-Kazimi is credited with the merit of reviving Iraqi-Saudi relations during the era of the government of former Prime Minister Haider al-Abadi between 2014 and 2018, as political, economic and security cooperation between Baghdad and Riyadh reached an unprecedented level.

It could be the first steps of cooperation between the two countries in the field of electric energy, in which Iraq suffers from a severe shortage, forcing it to import it from Iran at exorbitant prices.

And the former Minister of Electricity Qassem al-Fahdawi acknowledged that political parties prevented Iraq from importing electricity from Saudi Arabia at low prices compared to Iranian prices, in order to ensure the Iranian interest in this file, albeit at the expense of the Iraqi citizen.

Representative in the Iraqi parliament Raad Al-Dahlaki believes that Al-Kazemi’s first mission is to return Iraq to its Arab incubator, indicating that Iraq’s experience of lying inside the Iranian bosom for the past 17 years has not returned with any benefit to it.

Iraqi political writer Farooq Yusef stresses the idea that “Iran changed its policy in Iraq”, but he excludes that change in the interest of the independent Iraqi political decision.

Youssef said, in a statement to “Al-Arab”, that “Iran, which will not be able to stand with Iraq in its economic distress due to the collapse of oil prices, preferred that Iraq go to obtain assistance from other parties, and it will be difficult for these parties to trust in the term Remote. ”

Youssef asserted that “Al-Kazemi represented a new face of the political class from the point of his non-affiliation with Iran, that he would not be able to manage the state without making concessions to parties loyal to Iran, because those parties had managed in earlier times from the state with all its details, files and secrets, and therefore the Work on the conduct of state affairs will only pass through the cooperation of the Prime Minister with the parties.

He added that if that cooperation remained at the limits of understanding the need of the parties without submitting to them and their policy, Al-Kazemi would have passed a first obstacle in the way of his independence, which could create a common ground for trust between him and the Arab neighboring countries. But he warned that if Al-Kazemi, if he was satisfied with asking for aid, would have prepared for Iran and her parties another round, which may be worse than the previous rounds, and that optimism is similar to pessimism, both of them are related to the decisions that the new prime minister will take to improve the living conditions of social groups, which have become due to economic conditions. Sickness is dangerous to the survival of the system.