Barzani’s party: Abdul-Mahdi, the most suitable prime minister, and an agreement to re-assign him

Barzani’s party: Abdul-Mahdi, the most suitable prime minister, and an agreement to re-assign him 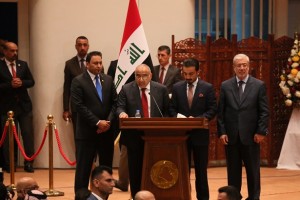 Baghdad – Mawazine News,
the Kurdistan Democratic Party, led by Masoud Barzani, saw on Saturday that Adel Abdul Mahdi, who is the most suitable for prime minister, revealed an agreement to re-assign him.
The party member, Idris Shaaban, told Mawazine News that “most of the political blocs agreed to re-assign Adel Abdel-Mahdi as prime minister again.”
Shaaban added, “The country is going through several crises that need the presence of a government, and that any vacuum will cause a special catastrophe, with outbreaks of disease, economic crisis and low oil prices.”
And, “Abdul-Mahdi is best suited to the current stage, and the political blocs will give him the freedom to choose his ministers in the manner he deems appropriate, and they will cooperate with him, and we see him as the best among those present and candidates for prime minister.”
And the Presidency of the Republic announced, (Monday 2 March 2020), that President Barham Saleh began consultations with leaders of political blocs to choose a new Prime Minister, succeeding Muhammad Tawfiq Allawi. Ended 29 / A 43