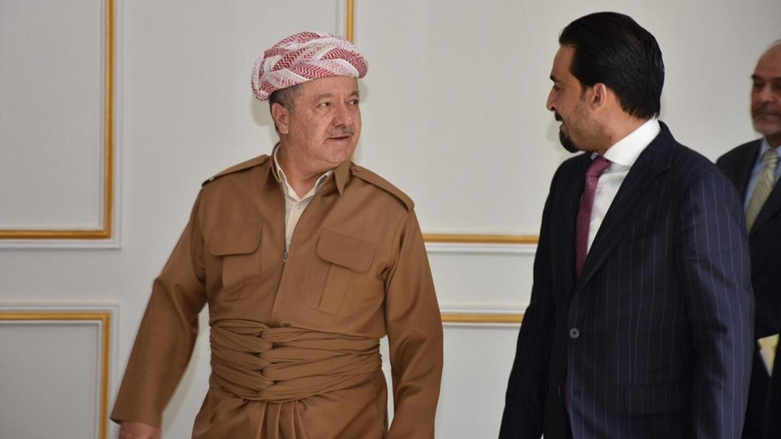 Baghdad – Mawazine News,
Speaker of the House of Representatives, Muhammad Al-Halbousi, agreed on Sunday with the President of the Kurdistan Democratic Party, Masoud Barzani, on 6 points regarding the formation of the next government.
He mentioned a joint statement after their meeting, which was received by / Mawazine News, that “Al-Halbousi and Barzani discussed during their meeting today the dimensions of the current situation and the political crisis that Iraq is going through, including the formation of the government.”
“In light of this meeting, the two parties agreed on the following points:
1. Working with all political forces to get out of the current impasse, and to contribute to restoring stability in Baghdad and the provinces of southern Iraq.
2. Any incoming government should be representative of all components of Iraq,” the statement continued. And on the base of the national partnership.
3 The government program must include a clear vision in preparing for the early elections as soon as possible in response to the demands of the demonstrators, and this issue should be a priority for the next government.
4. The government program must include a clear plan to restore prestige to state institutions, maintain societal peace, end external interference, confine arms to the state, and end informal military appearances.
5.Continuing cooperation with the international coalition to assist Iraq to counter the threat of terrorism and eliminate the remnants of ISIS.
6. Working to maintain close communication in order to coordinate positions between the two parties and the rest of the partners, “according to the statement. Ended / 29 BC