The solution begins with the trial of al-Sadr

The solution begins with the trial of al-Sadr 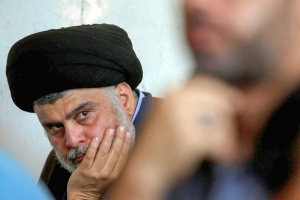 At a time when young Iraqi protesters demonstrated that they were sticking to their demands in the face of the brutal machine, which is operating with a high degree of brutality, there were those who planned to pull the rug from under their feet and to put their steadfastness in his favor.

That friend-only enemy was Muqtada al-Sadr. The utilitarian cleric, who was standing at the top of a pyramid, is the legacy of his poor subjects, who have turned around his father, who once considered himself the head of a talking reference in exchange for the silent reference of Najaf.

And if Sadr the son used his father’s legacy in what constituted an asset in his political life, then he often entered into a circle of misunderstanding when he puts the year in the service of the private, sacrificing the interests of the poor for his political gains. This is what appeared when his army entered into battles against the Americans and against the Iraqi army during the reign of al-Maliki and came out of it laden with hundreds of deaths, while he had personally benefited from those confrontations to confirm his political presence.

Muqtada, who is the servant of Iran now and the enemy of the Iraqi people, will not succeed in the near future in defending himself as an Iraqi citizen

Muqtada al-Sadr is an ignorant man, but a sly politician.

That is what Iran was cautious about in its careful handling of it.

Iran has not decided the fate of Sadr, although he has sought to blackmail it in previous times under false national slogans. It seems that Tehran, which destroyed his father and has the means to destroy him, has postponed everything to the right moment.

The Iranians knew very well that Muqtada’s dream lay in being their first man in Iraq. This is where his naivety appears. They were playing with his nerves while he thought he was provoking their instincts.

He believed that they would realize that his promise to them was more credible than the promises of others. So he went too far in deceiving others to finally be more Iranian than publicly loyal to Iran. He unleashed his ignorant followers to tamper with the pretense arenas, and if they did not succeed, they only had to resort to clashes and killings. And that’s what they did.

Moqtada Al-Sadr has moved the Iraqi scene to what looks like a civil war.

If the son’s chest had used his father’s legacy, in what constituted an asset in his political life, then he often fell into the category of misunderstanding when he placed the public at the service of the private

The security forces were monitoring what was happening in Najaf and had no right to interfere. This is because Sadr himself has claimed responsibility for ending protests in any way leading to killing, which has delighted pro-Iranian militia leaders. All crime falls on the chest. He was the one who planned it and he was the one who called for it and he was the one who urged it. As for those who carried it out, they are hardened criminals in the Mahdi Army.

It became illogical that Sadr not be required to appear in court as a war criminal. I firmly believe that this should be added to the protesters’ demands in the demonstration arenas. The chest is the most dangerous enemy, because in its existence it is based on the disdain of the poor for their use of material for his personal ascension.

His supporters are rumored to be laughing at Iran, but in reality he is killing Iraqis.

Iran will abandon it soon. He will definitely not be her man. It wiped out the mistakes of its militia when it donated to stand up to the Iraqi people. I do not think that anyone in the Iraqi regime will object to bringing Muqtada al-Sadr to trial as a war criminal.

Muqtada, who is now the servant of Iran and the enemy of the Iraqi people, will not succeed in the near future in defending himself as an Iraqi citizen. He has lost everything that qualifies him to be so. Khan referenced his father and tampered with her legacy. He only had to face justice. There are people portend his punishment.