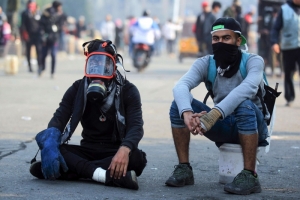 BAGHDAD – Nuri al-Maliki, leader of the State of Law coalition, thwarted an imminent plan to assign former minister Muhammad Allawi to form the new Iraqi government, causing the elimination of complex political understandings, reached after marathon negotiations that took a number of weeks, and entered into the line of these understandings Hezbollah The Lebanese, whose leaks revolve around his assumption of the task of managing the Iraqi file, after the killing of the former Quds Force commander Qassem Soleimani.

At dawn on Thursday, the crisis of choosing a successor to resigned Iraqi Prime Minister Adel Abdul-Mahdi appeared to be on the way to a solution, when it was leaked to the media that the leader of the Sadrist movement, Muqtada al-Sadr, had abandoned his supportive position to nominate the head of the intelligence service, Mustafa al-Kazemi, in favor of Allawi’s support, after Lebanese mediation.

Informed sources in Baghdad said that the official of the Iraqi file in the Lebanese Hezbollah, Muhammad Kawtharani, convinced Al-Sadr that Allawi is the suitable candidate to lead the Iraqi government in the next transitional phase, which is supposed to witness the dissolution of Parliament and the call for early elections.

When Kawtharani intervened, Al-Kazemi’s shares were very high to obtain the mandate to form the new government, due to his support by Sadr, the leader of the Al-Hikma Movement, Ammar al-Hakim, the leader of the victory coalition, Haider al-Abadi, most of the Sunni parties, and all Kurdish parties. But he faced a strong Iranian objection.

The sources say that Kawtharani had wagered on deciphering the Sunni-Shiite Kurdish understanding of Al-Kazimi’s candidacy by removing Sadr from him, which was what happened, as once the Sadr position was changed, Al-Kazemi came out of the competition entirely, and it was agreed to support Allawi.

The sources add that Hadi al-Amiri, leader of the Al-Fateh coalition, which is close to Iran, contacted Iraqi political leaders to inform them of the agreement that had occurred with Sadr about choosing Allawi, but he was surprised by a large objection by Maliki.

The sources indicate that Al-Maliki has been very angry with this agreement, because it directly affects him, as Allawi is one of his fiercest former opponents.

Allawi worked as Minister of Communications in the two governments that Maliki formed between 2006 and 2014, but he did not complete his mandate in either of them, as he resigned in the first and was prosecuted in the second.

And always the differences between Allawi and al-Maliki in the two governments were related to the philosophy of state administration and how to confront endemic corruption in its institutions, as the Minister of Communications directed sharp criticism of the Prime Minister at the time about referring billions of dollars to contracts or incompetent companies.

In al-Maliki’s second government, the prime minister moved the judiciary against his minister, accusing him of causing the waste of public money, after he participated in meetings hosted by Erbil to withdraw confidence from the government.

The sources say that the Iranians’ lack of enthusiasm for Allawi’s candidacy is due to his strained relationship with Maliki, who is seen as Tehran’s trusted ally and faithful man in Iraq.

And the sources do not rule out the possibility of settling the dispute, in the event Kawtharani insists on that, in light of the large roles he played recently.

Observers in Baghdad say that the Iraqi file returned to the authority of the Lebanese Hezbollah after the killing of the leader of the Quds Force in the Iranian Revolutionary Guards, Qassem Soleimani, in an American raid near Baghdad airport early this year.

This is not the first time that the Lebanese have supervised the Iraqi file, as their connection with it dates back to the period between 2006 and 2008, when it was under the direct management of Imad Mughniyeh.

Mughniyah is a prominent leader of the Lebanese Hezbollah guerrillas who was killed in Damascus by a car bomb in 2008, which Israel accused of masterminding.

Since 2008, the Iraqi file has been under the authority of the Iranian Revolutionary Guard, before returning to the Lebanese with the killing of Soleimani.

And Iraqi President Barham Salih warned on Wednesday evening that he would choose an interim prime minister if the political parties could not choose an alternative to Adel Abdul Mahdi by Saturday.

Abdul-Mahdi resigned from his post in November under pressure from popular protests, but he continued to perform his duties temporarily.

Iraq has been witnessing massive protests since the first of last October and the protesters, most of whom are young men, are calling for a reform of a system that they consider to be largely corrupt because it has made most of the Iraqis suffer from poverty.

“If the concerned blocs are not able to resolve the nomination order by no later than next Saturday, I see an obligation on me to exercise my constitutional powers by assigning him to whom I find most acceptable, representative and popular, and in the framework of the outcomes of the consultations that I conducted during the last period with political forces and popular activities,” he said.

Saleh called on the competing political factions to resume talks and agree on a candidate. He said, “I call on the parliamentary blocs concerned with the nomination of the Prime Minister to resume constructive and serious political dialogue in order to agree on a new candidate for the presidency of the Council of Ministers that enjoys popular approval and submit it to the Presidency of the Republic in order to issue an order of assignment.”

The deadline set by the Iraqi president is the latest sign that the Shiite political parties that dominate the Iraqi parliament have failed so far to overcome their differences and choose a new prime minister acceptable to the protesters.