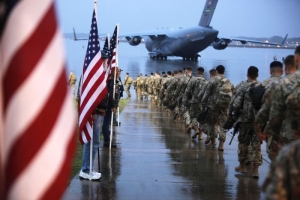 Iraqi political forces loyal to the Iranian regime continue to push for the passage of its decision to remove American forces from Iraq, despite opposition from Sunni and Kurdish forces, and the positions of President Barham Saleh are identical to the impressions of the Iraqi street, which believes that the American presence is still important in the country. Iran is clinging to its goal of singling out Iraq, which raises a series of questions about the ability of its militias in Iraq to confront ISIS if it appears again, and also about the price that Baghdad might pay after the threat of US President Donald Trump to impose economic sanctions on Iraq.

BAGHDAD – Iran is betting by pushing its proxies in Iraq to escalate with Washington and demanding the removal of American forces to show the world that this falls in the category of its responses to the killing of the Quds Force Commander of the Iranian Revolutionary Guards, Qassem Soleimani, in January.

Tehran is trying to appear by opening diplomatic channels with Washington that it is not the decision-maker, adopting a deceptive letter indicating that the request is purely Iraqi, despite all the geopolitical data confirming Iraq’s urgent need for the continued presence of American forces in the country, especially in the current stage.

And the adherence of the parties and militias attached to the Iranian decision to remove the American forces indicates that they do not consider Iraqi national security considerations as much as they seek to protect Iranian interests.

Historically, prior to 2003, there was a deal for the American occupation of Iraq that granted Shiite politicians rule Iraq, and part of its details revealed the former American ambassador to Iraq, Zalmay Khalilzad.

After this deal, the American and Iranian political, military, and intelligence forces coexisted and cooperated in implementing one program aimed at suppressing the popular Iraqi armed resistance against the American occupation. Concerns of interests and influence remained the main driver for harmony or difference between the two parties.

Throughout those years, the Iranian regime was busy fixing props for the Shiite parties loyal to it and implementing its expansion program, and setting up military logistical arrangements to control factions from the second line, the Iraqi street.

Besides, political allegiances have been gained for some Iraqi Sunni and Kurdish leaders, but the obsession of the American military presence has remained a problem for Tehran because of the possibilities of narrowing its comprehensive project in Iraq.

The elimination of “ISIS” was an opportunity for Tehran to break up the temporary relationship with Washington despite the services provided by the latter within the international coalition in favor of the Iraqis in defeating the extremist organization, but Tehran’s media outlets promoted its man in Iraq, Soleimani, that he was the one who liberated Iraq.

The parties that are mortgaging the Iranian decision to remove the American forces confirm that they do not place any consideration on Iraqi national security as much as they are looking to protect Tehran’s interests.

On the part of the United States, the decision of former President Barack Obama to withdraw US forces from Iraq in 2011 was not satisfied by the strategic leaders in the Pentagon, not because of Iraqi interests, but to see the maintenance of Washington’s foreign policy that was concerned with the need to stay in Iraq, which made its political era in 2003 and spent billions The dollars are in security and military fields, including the training of Iraqi forces and the formation of elite agencies, among them.

The American military concerns were extrapolating the possibility of an escalation of the threat of extremist organizations, and this happened in 2014 through ISIS, where many questioned about the role of Nuri al-Maliki in facilitating him, although he requested in the same year that he summon American forces to sponsor a broad international coalition to help Iraq.

With the arrival of Donald Trump to power in 2017, which changed some of the rules of the game with Tehran, which made Iraq a battleground expressed by recent incidents.

The story of expelling American forces from Iraq is a top priority for Iran, which exposes the fragile Iraqi situation, politically and securityly, to serious dangers, foremost of which is Tehran’s unilateral isolation of the country, after evacuating it politically and militarily from any forces opposing this influence.

The parties loyal to Tehran and their militias are working to suppress and end the youth uprising that announced its rejection of both the American and Iranian presence, as forces loyal to Iran in Parliament managed to pass the decision to end the American military presence despite the failure of the Kurds and Sunnis to participate in this emotional decision on the killing of Fasim Soleimani.

And after this decision, the Shiite forces are likely to launch their efforts to reinforce their decision to pass the personality they wish to enable as prime minister without the need for the Kurdish and Sunni blocs, and this was expressed by a pro-Iranian parliamentarian.

The move sparked resentment by the Kurds, as expressed by President of the Kurdistan Region Nechirvan Barzani, who pointed out “the importance of the presence of American and coalition forces for all of Iraq.”

Barzani’s perceptions are in line with the warnings of the American General Alexos Greenwich, who emphasized that the Islamic State can still return to the rise despite its weakening in the event of the withdrawal of American forces from Iraq.

And Iraqi President Barham Saleh strengthened the Iraqi impression of the importance of the presence of American forces in accordance with official understandings that achieve common interests between the two countries, but there are fears that he will comply with the governmental and parliamentary decision committed to removing the American forces.

It is understood that the Kurdistan government signed a bilateral military agreement with the United States through which American forces use bases deployed in the region and are keen to keep them.

As for the Sunni public, it is believed that the survival of the American forces in Iraq is the “lesser of two evils”, according to foreign press surveys conducted in recent days in some areas of Baghdad.

They believe that the primary goal of the presence of US bases in Sunni provinces is to prepare to reshape the security and political structures of these areas, which need first of all to confront the Iranian influence of the militias.

The US President reacted to the parliament’s decision in simple words, “The Iraqis have to pay the costs of the military bases we built and the cost of the war.”

Will the emotional engagement of factions loyal to Tehran – led by Muqtada al-Sadr – lead to practical decisions to remove the American forces, and if this happens amid fears that ISIS activities may return, will these militias alone be able to confront this military danger without the US-led international coalition ? A question that all Iraqi politicians have to answer is to avoid letting Iran decide the future of Iraq, which seems dark.