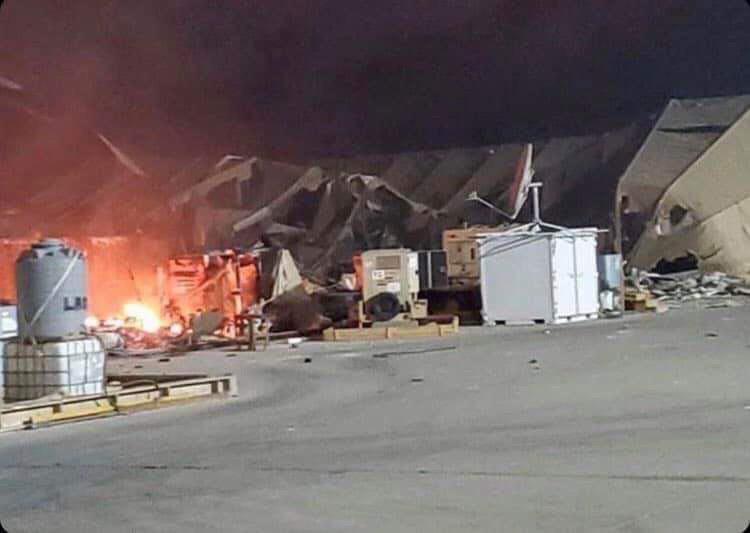 The Danish TV held a meeting with a Danish officer who was part of the force with the Americans at Ain Al-Asad base, where the Danish force withdrew with other European forces directly to Kuwait on the second day after the Iranian strike.

The reporter asked him: What exactly happened?

The Danish officer said: The leadership informed us at eight in the evening that Iran will start the attack tonight, and it appears that the Iraqi government has informed the US Central Command ..

He says … so we immediately entered fortified underground shelters ..

We waited with fear, terror and anticipation !!

The officer says, and if with a thunderbolt, it descends on us from heaven to suffocate us in our shelters due to the severity of the dust that entered us !!

He says, then the siren sounded !!!

The reporter told him, “Why didn’t the sirens sound before the first missile arrived?”

The Danish officer told him: It appears that the missiles are equipped with high-precision jamming devices !!

Then the officer says: Then the terrifying missile attacks came to us, and they numbered about 13 missiles !!

The reporter said to him: Did they target the bomb shelters !!?

The officer told him: Absolutely not, and if they had targeted Al-Malaji, the catastrophe of the century would have occurred by all accounts, because of the presence of thousands of soldiers and officers of various nationalities within it !!

The reporter said to him: Why do you think you did not target the bomb shelters !!?

The officer told him: It seems that Iran wants specific and moral strikes and does not look for strikes of a quantitative nature that can be victimized by soldiers, as well as it is a message to the world that in my view, Iran wants to tell the world that we Muslims are not murderers as the Americans portray you, and if we were, we would have buried Thousands of soldiers and officers underground !!!

The reporter told him, “How do you explain that?”

The officer replied: It is very clear, because the missiles were very accurate, as they hit their targets with high accuracy without dropping or a single missile deviating from them !!!

From here we know that the Iranians possess accurate maps of barracks, patios, leadership centers, corridors of administration, shelters, and aircraft shelters, and they were able to target shelters while they were at the peak of calm and tolerance !!

The reporter told him: When did you get out of the shelters and what did you see !!?

The Danish officer told him: As for the Americans, they went out after the warning ended, almost an hour after the strike, as firefighters and ambulances rushed while we were in the shelters, we heard the sounds of military helicopters and the shouting of soldiers, but we did not go out at the command of our leaders for fear of other strikes, and when we went out in the morning we found the fire engulfing More than seven important sites, charred mechanisms, and buildings turned into rubble !!

So the reporter told him, “What are these websites? Can you tell us?”

The Danish officer said: We know little about the US headquarters and some of them are joint sites, but there are sites that we do not know and we are not allowed to enter as a Danish force affiliated with the international coalition, but what I know for sure is the destruction of the control of giant radars with all their devices, and the headquarters of the American Military Intelligence was destroyed Entire weapons stores were destroyed and they exploded about half an hour after the attack. Fighter aircraft runways were destroyed, air-monitoring platforms and surface-to-air missile launch bases were completely destroyed, while sensors, air and thermal sensors were destroyed, and here I want to add that Iran M targeting the Iraqi wing and wing coalition nor the shelters and health and service centers, they are focused only on the US wing and elected targets. This indicates that the Iranians have a complete survey of accurate maps of all military bases and other foreign in Iraq and the Middle East in general ..

Reporter: So why do the Americans not recognize the size of the losses !!?

The officer: This matter belongs to their policy and their circumstances. I do not understand what they think, perhaps they do not want to worry their people, and this is clear from their decision to prevent journalists from entering the base to this moment as I heard from you !!

Reporter: We are happy for your safety ..