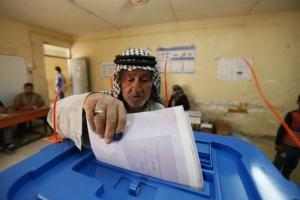 The elections that the political process in Iraq considers “the pride of the democratic experiment” are in fact only the biggest appeal in the process itself because of the many legal and procedural flaws that make it a means of popular participation in the management of public affairs.

BAGHDAD – The Iraqi parliament passed a series of amendments to a law regulating the voting process for the selection of provincial parliaments in the provinces.

According to the amended text, which was seen by the “Arabs”, the parliament chose a formula to distribute votes on the participating lists, which included the exclusion of independents and emerging parties, and allow the large parties to dominate the largest number of seats, in various constituencies.

Although Iraq has yet to be determined, a precise date for the local vote, speculation is that it will take place in the first half of next year.

Local parliaments in Iraq play influential roles in domestic politics and have often been the starting point for access to parliament and the federal authority.

The Parliament has ignored hundreds of observations by legal and electoral experts concerning the mechanism of distributing votes and seats, the means of supervision to ensure integrity, and the cessation of counterfeiting, to move towards formal amendments that allow powerful parties to tighten their grip on local councils without addressing the corrupt electoral system, Which excludes independents and allows for forgery and manipulation even after the end of the voting process.

Notably, all major political parties have endorsed and passed the new amendments, revealing the extent of collusion and freezing traditional adversaries, whenever it comes to maintaining political gains.

Observers explain this political trend as a response to the state of confidence felt by the Iraqi parties, following the scandal of popular boycott of the latest electoral operations in the country.

Observers believe that the Iraqi parties were concerned that the popular boycott of the general elections last May to hit the constitutional legitimacy internally and externally, but fears were not in place, as the political parties realized that the street is no longer concerned with the elections and that the international parties, The United States has no time to dive into the difficult and complex problems in Iraq, allowing those parties to move forward.

The new amendments led to a wave of expectations that the proportion of Iraqis who will participate in the next elections, will be low.

Iraq witnessed in May last year parliamentary elections marred by major violations in the various procedures, starting with the counting of voters and demarcation of lists through the voting process itself, and to the counting of votes and promise, where most of the forces participating in the elections and demanded to bypass the automated count and recount manually, Partial without affecting the results.

Jassem al-Hilfi, a leading figure in the Iraqi Communist Party and one of the influential figures in the protest movement, before joining forces with Shi’ite cleric Moqtada al-Sadr in the last election, predicted that the new amendments would bring the electoral law to 15 percent.

“These reforms have eliminated the possibility of change in the upcoming elections,” he said. “They have created an opportunity for local governments to dominate local governments for a few more years, opening doors to the continuation of abhorrent quotas, sharing benefits and privileges and feeding the tree of corruption.”

Al-Hilafi, who is under great pressure from the civil trend to end his alliance with the Sadrists after they supported the recent amendments to the election law, “This amendment brought the legitimacy of the monopoly of power and cut the way to meet the popular demands continue to escalate the quota and fill the ports in front of the winds of change and prevent the flames on the body A country that has been decimated by the same quota, corruption and lack of services, and the deterioration of living conditions. ”

“The decision-makers who instructed their deputies to vote in an uncritical manner voted for them, but wanted to abolish any representation in the local councils of those who oppose their approach, and especially to represent the civil forces, new parties and independent political figures opposed to quotas, Solid in addressing the policies of the powerful. ”

He added that “the unjust amendment approved by the majority of influential in the House of Representatives within the rotation of their followers in the seats of legislative councils in the provinces as a necessary introduction and entry to occupy the operational sites, where contracts and deals and privileges away from censorship.”

“Some parties are violating the constitution by narrowing the electoral divide,” Elami said, by choosing a mechanism for distributing votes that would exclude independents from the political arena.