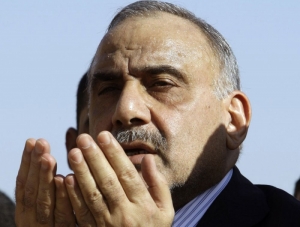 What will be faced by the new Iraqi Prime Minister Adel Abdul-Mahdi of complex problems accumulated and a stage of years of chronic government failure and poor performance in the management of public affairs, will make his leadership of the country is like walking in a field of mines that can not guarantee the explosion of one of them and wounding his young government in the killing.

BAGHDAD – Iraqi Prime Minister Adel Abdul Mahdi faces a series of internal and external challenges, some of which amount to a long-term threat of survival.

In the details of the most important external challenges, comes the US sanctions file on Iran, which could play a significant role in Iraq to deepen its impact on the eastern neighbor, or to turn on the contrary to the breather.

Observers say Mr Mahdi can invest the balance of his traditional relations with the United States and Iran in reaching a settlement that does not hurt his country.

Last week, it was clear that Iraq could be affected by its failure to import Iranian goods, in compliance with US sanctions. For example, the price of some goods in the Iraqi market rose by about three times, once Baghdad began to implement a ban on imports from Iran.

An Iraqi economic expert warns of the danger of Iraq’s economy being linked to the Iranian economy for political and ideological reasons. It has nothing to do with the material benefits and benefits that govern the logic of economic relations between countries. He said that the ruling parties, especially the Dawa Party, are absolutely responsible for linking the Iraqi economy organically to the Iranian economy So that the first can be considered part of the second. Iraq therefore seems unable to import its food from anywhere other than Iran. Which means that Iraqis are threatened with their strength if committed to the implementation of US sanctions imposed on Iran.

As the expert adds, the pro-Iranian parties were preparing Iraq to play a role if Iran was exposed to such difficult times as it is expected to pass soon. It is clear that these parties have decided to take from the Iraqi people a human dam that prevents the implementation of these sanctions.

Adel Abdul Mahdi will not be able to rebel against Washington in the sanctions against Iran because he will put his country in the face of grave risks. But full compliance with sanctions will threaten the Iraqi economy, which requires a special approach to this delicate issue.

Abdul Mahdi will have to look for a formula that does not anger the Americans and does not provoke the Iranians because of his urgent need for a balanced relationship with both of them if he wants to run his country successfully.

Observers say failure to achieve this approach would threaten the survival of the Iraqi prime minister, regardless of how long he is in office.

Externally, Adel Abdul Mahdi faces a very serious challenge, with regard to the water level in the Tigris and Euphrates rivers that originate from Turkey, and feeds on natural tributaries from Iran.

The existence of a strong, independent and sovereign Government in its resolution is a prerequisite for success in addressing and resolving complex issues

Over the past few years, Turkey has reduced the amount of water flowing into the two rivers towards Iraq, while Iran has diverted some of the tributaries away and exploited them locally in agricultural and industrial projects, causing water scarcity that has led to increased desertion in Iraqi territory and has severely damaged agriculture.

Turkish and Iranian politicians in the water sector had a direct reflection on the Iraqi interior. Water scarcity triggered violent protests in Basra south, which was classified as one of the most important reasons for the renewal of the mandate of former Prime Minister Haider al-Abadi.

Once Abdel Mahdi was appointed to form the new government, a series of warnings came from Basra trying to draw attention to the danger of renewed protests, and the difficulty of containment if that happened.

According to insiders on the Iraqi issue, it will be difficult for the government of Abdul Mahdi to circumvent the problems of water and food or postpone the urgent consideration. These are the problems that can lead to popular protests that may not only lead to the overthrow of the government, but will lead to the end of the entire political process.

Iraqi political analysts have been pessimistic about the water issue that Abdulmahdi’s government has made no mention of. The protests in Basra, Iraq’s most hit city, have not been heard by Iraqi politicians as they prepare to rule Iraq for four years to come.

According to one analyst, the silence of the new government to address this problem is a continuation of what the previous governments did, despite the explicit warnings previously launched by Iraqi water experts.

The same analyst considers that all other problems are not comparable to the problems of food and water, which require a strong, independent and sovereign government in their decisions that must take into account the interest of the country and its people, away from political calculations and ideological considerations.

The sources say that Abdel Mahdi is counting on “Turkish and Iranian quick gifts in the water file as a goodwill gesture on regional relations in the foreseeable future.”

The popular crowd, transformed from a temporary force formed by a religious fatwa against an invasion that calls for large parts of the country into a legislator by parliament, is among the most serious internal challenges facing Abdul Mahdi. The crowd is linked to an Iranian plan that requires the creation of an Iraqi army, Iran’s Revolutionary Guards.

After the demise of the broad threat posed by a sympathetic organization, the crowd is now perceived as a force within the sphere of Iranian influence, not the Iraqi, because of the close ties of its leaders in Tehran. It is not clear how Abdul Mahdi will deal with this force, which may be used in a coup against the government if it goes in an inappropriate direction for Iranian interests.