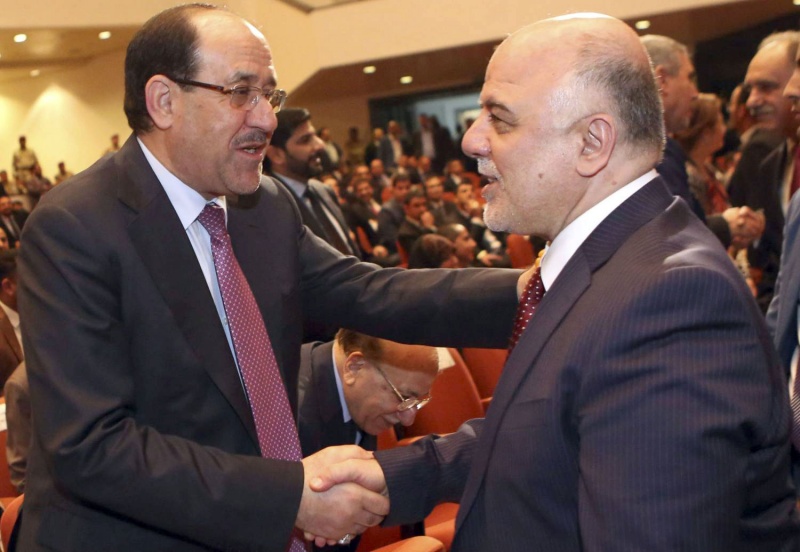 Haidar al-Abadi from the Islamic Dawa Party is likely to be ousted in light of the current trend towards appointing a head of the Iraqi government from outside the party, which has been monopolizing the post, which would be an official announcement of the party’s split to consecrate the divisions in the Shiite political house. On positions and gains away from competing ideas and programs.

BAGHDAD – The ruling Islamic Dawa party in Iraq is planning to expel outgoing Prime Minister Haider al-Abadi from his ranks, blaming him for the loss of the country’s top executive post after being held by his leaders for 14 years.

“The leadership of the call has reached the certainty that the post of prime minister will emerge from the party in 2018 for the first time since 2005,” sources in Baghdad say.

Abadi’s expulsion from the party would mean a major step toward his official split. The man who led the government for the past four years and turned into an important figure in the Iraqi political equation is likely to initiate a new party under his leadership and take a number of call codes.

The split between the Shiite political house, which had already witnessed the disintegration of what was known as the “National Alliance” of several Shiite parties, was also witnessed. It also witnessed the split of the Supreme Islamic Council by the departure of Ammar al-Hakim from him and his establishment with a number of members of the Council, Stream of wisdom “.

And the common denominator between the various divisions that hit the Iraqi Shiite political house, the original cause of the struggle for power and leadership, and has nothing to do with competing ideas and programs.

Three of the party’s most prominent thinkers wrote a letter to lead the call, in which they spoke about the reasons that led to the loss of the post of prime minister, stressing that Abadi rejected the many calls that were directed to him on the need to heal the rift with Nuri al-Maliki,

The three “preachers”, Abdul Halim Zuhairi and Abu Tariq and Abujaafar Al-Rikabi, criticized what they called “the sedition of the two lists” in reference to the insistence of Abadi and Maliki to participate in two separate lists in the elections last May, where they won the third and fourth positions respectively in the Shiite circles, The call to maintain the post of prime minister.

The three “preachers” revealed that the urgent negotiations within the Dawa party after the formation of the two lists ended with an agreement that provides for the party to supervise the two lists and to fight after the elections, but Abadi and Maliki have gone “two different ways since the separation point of the registration decision on two lists.”

The three “preachers” say that “after the results appeared, and since the end of the elections, the leadership held a meeting in the house of Brother Maliki and another in the House of Brother Abbadi and in both meetings was Abadi’s refusal to clear and reiterated that he did not sign the decision to merge the two blocs and not a candidate for the Dawa Party The election”.

The three signatories to this secret letter, prepared for internal circulation exclusively, “We were aware that the brother, after realizing in recent weeks the impossibility of his nomination from all parties, including others, to appreciate the status of the call and preachers and withdraw his candidacy and announce his alliance with the state of law to support the invitation A large bloc of about 70 seats will be effective actor in the Iraqi political scene, both operational and legislative and calculated for her in the negotiation marathon, but seemed without the cartography of the dead as was the substance of his answer to us hours before the writing of this clarification to you.

The “preachers” three, that “a lot of followers of the call and political and social forces were waiting for the” da’is “to resolve their position until the start of the stage of the new government map accordingly, but did not get until we entered now another stage do not know the seriousness of its negative repercussions on the call and “Preachers”.

He called on the three preachers to hold a session of the Shura Council of Da’wah and hold an urgent conference of the party with names that attended the previous conference after deleting the cutters in reference to the possibility of issuing a decision to separate Abadi from the Dawa party.

One day after the letter, the Dawa party leaked a letter signed by a “group of preachers,” without naming their names, demanding a freeze on Abadi’s membership or expulsion from the party for “violating the explicit agreement signed during the elections, which obliged the two lists to merge into one list After the elections, “as well as” his disobedience to the leadership in choosing the prime minister and his insistence on running despite the leadership’s opposition to him. ”

The signatories demanded the leadership of the Dawa Party to feel “the seriousness of the stage and the forest of the situation, the invitation began to lose its brilliant luster.” While Abadi responded publicly, to confirm his commitment to the party line and decisions without going into details, spilled from his own political team a detailed response to the messages of “preachers” in which al-Maliki blamed the schism of the party and accused him of circumventing his decisions.

The response acknowledged that Abadi repeatedly tried to communicate with Maliki and the leaders of the Dawa party loyal to him without reaching a conclusion.

The response indicated that Maliki deliberately deepen the dissent within the Dawa Party in order to weaken him so as not to be able to provide political support to Abadi, who appeared before the elections that he is moving towards ensuring his second term firmly.

The Arab sources say that the process of freezing the membership of the Dawa party, and perhaps expulsion, may become a reality in the next phase, under the tight control of Maliki’s important joints of the party, most notably sub-organizations and sources of funding.

Observers say Abadi has ignored many suggestions, notably from Shi’ite cleric Moqtada al-Sadr, about the need to leave the Dawa party before the May elections to be re-elected as prime minister.

Observers say that Abadi feared that the political forces would be singled out by him during the negotiations to form a government if he lost his party cover, but the result was a double loss, as his hopes faded in the second term and he is facing expulsion from his party.