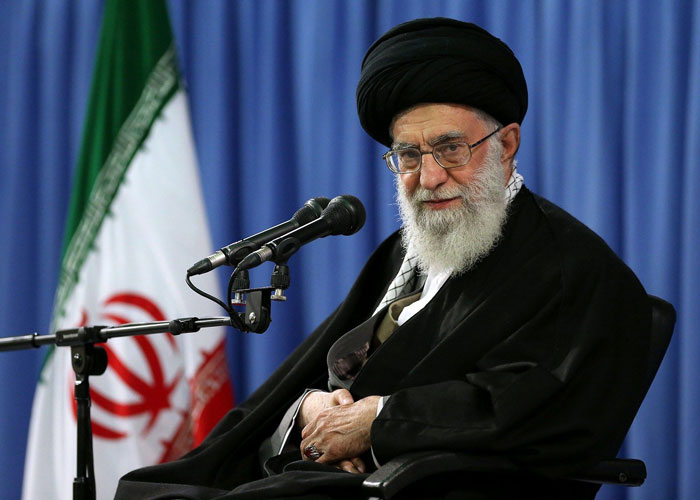 Supreme Leader of the Islamic Republic, Ayatollah Ali Khamenei Thursday confirmed that the nuclear industry ‘need’ to allow Iran to develop, stressing that Tehran is not seeking to acquire nuclear weapons.
Khamenei said in a speech broadcast on state television that ‘the nuclear industry, the need for energy and convert sea water to drinking water In the field of medicine, agriculture and other sectors ‘, reiterating that Iran is not seeking to’ nuclear explosion nuclear test nuclear weapons. ” As Iranian President Hassan Rohani said in a televised address on Thursday that his country will not sign any final nuclear deal with the six world powers unless filed on the same day all the sanctions imposed over its nuclear program. The Iran and world powers have reached a tentative agreement last week, the Swiss city of Lausanne, aims to restrict Tehran’s nuclear program in exchange for the lifting of economic sanctions. The work of all parties to reach a final agreement no later than June 30 to dispel Western powers fear that Iran’s nuclear program is the goal of developing nuclear weapons. Iran insists its program is peaceful. The spiritual ‘We will not sign any agreement that all the sanctions did not raise the same day .. we want a satisfactory deal for all parties involved in the nuclear talks.’ Since reaching agreement primer appeared to be in both Iran and the United States, a different interpretation of some issues, including the pace and extent of the lifting of sanctions. Rohani said in a speech on the occasion of the National Day of Nuclear Technology ‘Our aim in the talks is the maintenance of the nuclear rights of our people. We want the result to be in everyone’s interest. ‘ He said ‘the Iranian people was and remains the victor in the negotiations.’ Iran insists on the need to stop the work of all United Nations related to the nuclear issue as well as the lifting of all restrictions by the US and European economic sanctions resolutions. But the United States said on Monday that he would have to lift the sanctions gradually in stages under the nuclear deal destruction. The US and European sanctions has reduced Iran’s oil exports of nearly 1.5 million barrels per day since early 2012 which led to decline by 60 percent to reach about one million barrels a day. A spiritual ‘Our main goal in the talks is recognized by the President US Barack Obama that the Iranians will not surrender to pressure, sanctions and threats. ‘ He said ‘It’s a victory for Iran that the world recognizes the first military force that the Iranians will not bow to pressure.’ will resume negotiators from Iran and the United States, Germany, France, Britain, Russia and China negotiations in the coming days to pave the way for the final agreement.