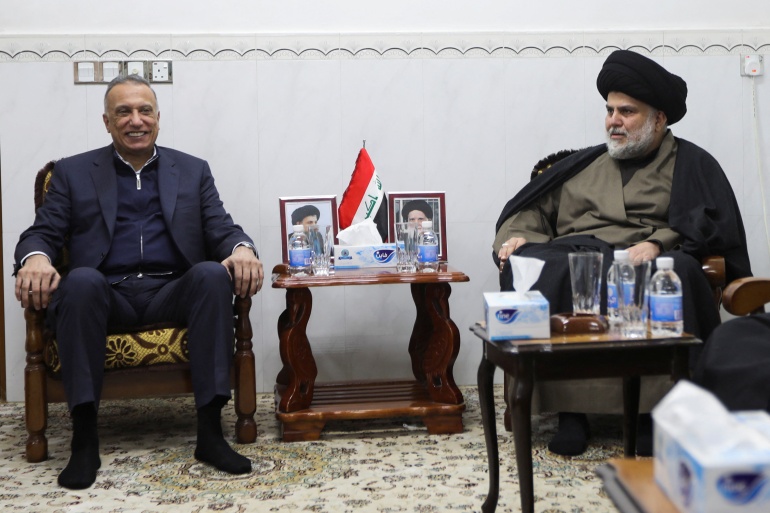 Seven months have passed so far since Iraqis went to the polls in the parliamentary elections in October, and the fierce competition between the two camps, one led by the leader of the Sadrist movement Muqtada al-Sadr, and the other by the Iranian-backed coordination framework (which includes the most prominent Shiite forces except for the Sadrist movement) ) to prevent the formation of a new government.

In an article published by the British “Middle East Eye” website, Souad al-Salihi said that Muqtada al-Sadr recently called on 40 recently elected independent representatives to form their own bloc and nominate a prime minister who will be supported by the coalition led by him (the Alliance to Save the Nation consisting of the Sadrist movement and the Alliance Sunni Progress and the Kurdistan Democratic Party

The writer quoted a prominent leader in the National Salvation Alliance – which occupies 175 out of 329 seats and is made up of prominent Shiite, Sunni and Kurdish forces, namely the Sadrist bloc, the Alliance of Sovereignty, and the Kurdistan Democratic Party – as saying that al-Sadr is not in a hurry to form a government. What it is for another 6 months or a year is one solution that is being strongly suggested now.

He added that there is no local or international circumstance or factor that pressures any of the actors in the tripartite alliance to accelerate the formation of the government, as the United States is busy in other parts of the world and does not care much about what is currently happening in Iraq, as for Iran, the current situation in Iraq is less Damage from the outbreak of fighting between Shiite factions.

move parliament
The writer confirmed that Al-Sadr has a great influence on the government of Prime Minister Mustafa Al-Kazemi, last October, the Sadrist movement emerged victorious in the elections by obtaining the largest number of parliament seats (74 seats).

Since then, he has tried to form a majority government alongside his Kurdish and Sunni allies, which would marginalize the Iran-backed factions, which boycotted parliament sessions to prevent the election of a new president, and thus prime minister, to emphasize its position calling for government quotas similar to the governments that have been formed Previously since 2005.

The writer believes that if al-Sadr is able to continue to monopolize control through his control of Parliament and the Al-Kazemi government, the Iranian-backed groups will witness a decline in their influence and authority, indicating that to prove the seriousness of his plan, al-Sadr and his allies announced that parliamentary work will continue whether the boycotters were present or not.

The writer quoted Hakim al-Zamili, the deputy speaker of Parliament, who follows the Sadrist movement, that the heads of the parliamentary blocs discussed last Monday appointments to parliamentary committees, and the need to expedite the approval of the annual budget.

There is a fear that if the budget is not approved, it will hinder government work, offices and social welfare networks. To avoid this; Last month, al-Sadr and his allies submitted a small budget draft they called the Food Security and Development Law for an urgent vote, thus keeping the country running for several months without approving the annual budget.

A leader in al-Sadr’s movement said, “We will not allow the country to be held hostage, we will implement the constitution, which provides for a legally recognized parliament, a speaker of parliament, a president, a prime minister, and a government.”

Marginalization of Iran’s allies
The writer pointed out that the political forces have been working, since 2003, under a power-sharing agreement; Where influential positions – civilian and military – are divided between parties in the manner of representation in Parliament, which alone grants approval for appointments to these positions. But in the absence of political consensus amid fierce competition between the parliamentary blocs, Al-Kazemi and his predecessors were forced, in recent years, to occupy positions by appointing acting temporary officials to circumvent the parliamentary process.

Iran-backed factions have dominated the Iraqi government and parliament for nearly two decades, and they hold nearly two-thirds of the top positions.