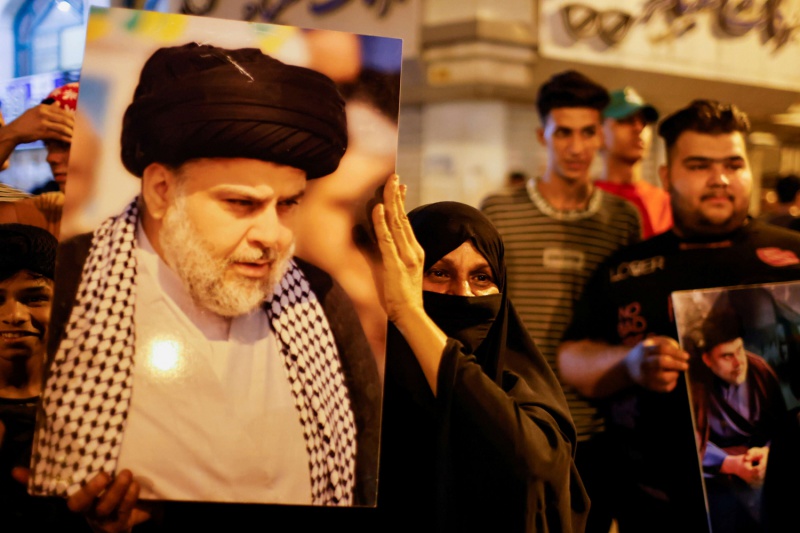 The coordination framework in Iraq anticipates the expiration of the deadline set by the leader of the Sadrist movement Muqtada al-Sadr, which is scheduled for the tenth of this May, announcing Wednesday his adoption of an initiative to end the crisis of forming the new government.

The framework initiative includes nine points, the most prominent of which is the call for dialogue “without preconditions,” a call that the leader of the Sadrist movement is unlikely to accept because he will consider it a declaration of defeat.

The framework, which includes Shiite political forces close to Iran, most notably the Popular Mobilization Factions, said in a statement, “Based on a sense of legitimate and moral responsibility, we announce a comprehensive national initiative to get out of the current crisis and political blockage, starting with the electoral results and the accompanying failures and ending with the parliament session in The thirtieth of last March (dedicated to electing a president of the country before it failed).”

He explained that “the initiative includes inviting all parties to sit at the dialogue table and discuss solutions and treatments without preconditions or restrictions. Everyone puts the interest of the country and the citizen before his eyes.”

He called on the Kurdish parties to “make efforts to understand and agree on a candidate who has these qualities and within the established contexts.”

With regard to the position of Prime Minister, the statement said, “The right of the largest component of society must be preserved through the blocs of the larger component allied to form the most numerous bloc, and then agree on the nomination of the next prime minister.”

And he stressed the need for “the forces participating in the government, including them, to bear the responsibility for his (the prime minister’s) failure and success and to hold him accountable.”

The coordination framework called for “to move away from the policy of breaking wills, showing flexibility and offering mutual concessions, in order to meet with national and political participants, taking into account electoral weights.”

He pointed out that “he will form a negotiating committee to start a dialogue with the political parties, in order to put this initiative into practice.”

The coordination framework initiative comes after the recent visit of the leader of the Sovereignty Alliance and the Speaker of Parliament, Muhammad al-Halbousi, to Iran, and the visit of a high-ranking Iranian delegation to Erbil and its meeting with Massoud Barzani, leader of the Kurdistan Democratic Party.

And the “Iraqi 24″ website quoted a political source as saying that “the initiative represents a lifeline for all political parties to relinquish their high ceilings, and retracting them has become the only way to end the political blockage.”

The source, who preferred to remain anonymous due to the sensitivity of the situation, added, “The Iranians have heard from Sadr’s allies a desire to form an inclusive government, stressing the criticality of the situation in which their ally has placed them.”

He pointed out that “Al-Halbousi and Barzani expressed their desire to cooperate with the parties to the framework in order to end the blockage.”

The source considered that “the most important points of the initiative lie in flirting with independent Shiite representatives and granting them the status of partnership in the strategic decision of the largest component, and depriving al-Sadr of playing this card as he was planning to do so.”

In early April, al-Sadr gave the Coordinating Framework forces 40 days to negotiate with parliamentary parties, with the exception of his list to form a government.

And the Iraqi parliament twice failed to hold a session dedicated to electing the president of the republic, according to the results of the elections held last October.

59 candidates are competing for this position, most notably the Patriotic Union of Kurdistan (PUK) candidates Barham Salih and the Kurdistan Democratic Party Reber Ahmed, where Salih enjoys the support of the coordination framework.

Ahmed receives the support of the “Save a Homeland” coalition (175 seats), which is made up of prominent Shiite, Sunni and Kurdish forces, namely the “Sadr bloc” and the “Sovereignty” and “Kurdistan Democratic” coalition.