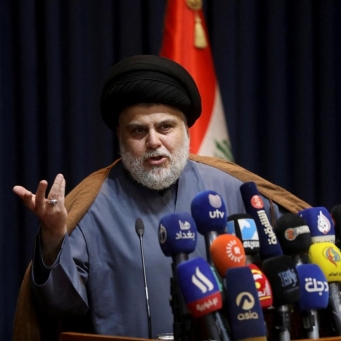 The conflict between the “Sadr movement” led by Muqtada al-Sadr and the blocs of the “Coordination Framework” alliance, most of which are allied and loyal to Iran, may appear in several files, including the issue of dealing with the American presence, withdrawing militia weapons, restoring the Iraqi armed forces, fighting corruption, and the shape of foreign relations, especially with Iran,
but these files hide the real conflict between the two sides, as it is a leadership struggle, between the leader of the Sadrist movement Muqtada al-Sadr and former Prime Minister Nuri al-Maliki, which is the basis for al-Sadr’s disagreement with the forces of the “coordinating framework” to proceed with the formation of the government and the distribution of positions as happens after every election. in Iraq.

The mutual refusal between the two men dates back to March 2008, when al-Maliki launched a major military campaign backed by the American army, called the “Sollah al-Fursan” against al-Sadr’s “Mahdi Army” militias in Baghdad and the cities of the south, which resulted in dozens of deaths and hundreds of arrests. in prisons.
Al-Sadr considered this operation as an attempt to crush the Sadrist movement, forcing it to acquiesce in other Shiite forces and treacherously from al-Maliki, as the movement was one of its strongest supporters in assuming the position of prime minister during his first term (2006-2010).

Iran temporarily suspended hostility
Despite Al-Sadr’s many statements rejecting Al-Maliki’s assumption of the position of Prime Minister for a second term, and his assertion of the need to support any alternative, he retracted his position at the time, under Iranian pressure, and announced, from inside Iran where he was residing, his approval of the second term, after his meeting with Al-Maliki, In the presence of Iranian officials, led by the former commander of the “Quds Force” Qassem Soleimani, but this matter did not last long, and the differences between the two parties escalated until mutual statements reached, and Sadr’s followers threatened to retaliate against al-Maliki after his statements in 2013 that al-Sadr does not understand anything about Politics and everyone should not deal with him in this regard, and this matter had a clear impact on Al-Sadr’s position later on, as he succeeded in convincing the Shiite political forces not to extend Al-Maliki for a third term, taking advantage of the fears of these forces and Kurdish and Sunni forces from him, as well as the entry of “ISIS” into A number of Iraqi cities, which constituted a catalyst in this matter.

Since the formation of the Haider al-Abadi government in 2014, al-Sadr has been trying hard to remove al-Maliki from the political scene and make him outside the game of political alliances in Iraq. It can be said that the “deep state” is affiliated with him, and he moves through it to stay in the political process.
Despite Iran’s attempts during this period to restore cordiality between the two parties, especially since al-Maliki is one of its most prominent allies in Iraq and an important political card, al-Sadr thwarted all these attempts, and worked to remind the public from time to time that al-Maliki is the cause of the suffering and problems of Iraq’s Shiites. That he contributed to the strengthening of the great Iranian influence in the country.
Al-Sadr’s opportunity to isolate al-Maliki politically appears great, especially as he is pressing hard on the leaders of the coordination framework to ally with him to form a government, provided that no executive position is given to the former prime minister, whatever his rank.

Ghazi Faisal, director of the Iraq Center for Strategic Studies, said, “The dispute between Muqtada al-Sadr and Nuri al-Maliki is systematic and deeply rooted. The Dawa Party headed by al-Maliki is considered one of the believers in the Sadrist approach, but belief in the Sadrist approach is one thing, and working on the practical level is another thing,” pointing out that there is a difference in the theoretical and political approach between al-Sadr and al-Maliki.

Faisal continued: “The Sadrist movement is an Iraqi Arab movement, and it did not enter Iraq after 2003, as did the Dawa Party, but rather grew up in Iraq, and has a speciality inside Iraq,” noting that “Al-Sadr grew up in Iraq and lived under the shadow of the Shiite authority in Najaf.” “.

He pointed out that “the Sadrist movement represents the poor majority, and it grew up among the downtrodden classes, and it is the current of the poor, not the current of the aristocracy, in addition to that Maliki, when he was prime minister, fought a war against Sadr’s Mahdi Army in the name of (the Knight of the Knights) in Baghdad and Basra in 2008.” He pointed out that “Al-Sadr has never forgotten the military operation launched against his supporters.”
Ghazi explained that “Al-Sadr does not present himself as the leader of the Shiite house, but rather the leader of a current that constitutes a large proportion of the Shiites, and it is the most powerful current in the masses, unlike the Dawa, which is an elitist party,” noting that “the Sadrist movement, both during the Maliki government period, and others, It was an opposition current that took to the street, and rejected government policy, and in that it did not appeal to the Dawa Party.”

Al-Sadr works intelligently, weaving relations with the Arab Gulf states and their leaders, and his position is smart and bold, contrary to the call, and he does not consider Iran an enemy to him, but he rejects subordination while visiting Iran and building good relations with it, unlike al-Maliki, ruling out the “meeting of opposites al-Sadr and al-Maliki.”

There will be no convergence

In turn, the researcher in political affairs, Iyad al-Anbar, ruled out the rapprochement of al-Sadr and al-Maliki “because there are major differences between them as a result of previous accumulations.” Al-Amber added, “Among these accumulations is what is related to personal matters between Al-Maliki and Al-Sadr, as the first refuses to recognize the leadership of the second, while Al-Sadr was an important party in the failure of Al-Maliki to reach a third term,” noting that “these are major reasons that we believe led to To the emergence of a gap of disagreement between the two men.

The struggle between inside and outside

Al-Amber stated, “The methodology of Mr. Muhammad Sadiq al-Sadr may be different from that of Mr. Muhammad Baqir al-Sadr, who framed the political work of the Dawa Party,” noting that “the dispute relates to many political issues and domination of the Shiite political leadership.”
Al-Anbar explained that “Al-Sadr believes that politicians from abroad, including members of the Dawa Party, were outside Iraq, and did not form a party to overthrow Saddam Hussein’s regime, as was the case for those inside, and thus these differences were reflected in political competition.”
Regarding the relationship between Al-Sadr and Al-Maliki with Iran, Al-Anbar said, “In the beginning, when Al-Maliki was nominated for the position of prime minister, he was not close to Iran, but rather had relations with it, and this situation developed by virtue of the reality of political work. On the other hand, al-Sadr has contact with Iran, but he does not necessarily agree with it on many issues.
And on the possibility of rapprochement between al-Maliki and al-Sadr, between Amber that “it is difficult for them to meet unless there is a strong mediation.”