Baghdad clings to the American embassy and attacks “gangs”

Baghdad clings to the American embassy and attacks “gangs” 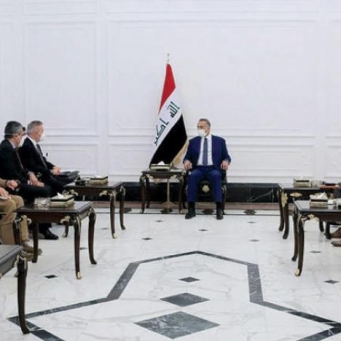 At a time when the Iraqis held their breath during the press conference of US President Donald Trump late at dawn yesterday (Monday), regarding whether he would address the Iraqi situation, Trump completely ignored what is going on in Iraq in terms of controversy over whether to close the largest Washington embassy in the world. In Baghdad or not. For its part, the US embassy, ​​for its part, and at the height of the heated debate among various political circles regarding the news about its closure, announced that it will conduct a series of tests during the next two days, which requires more sirens to sound, which made it apologize to the residents for the inconvenience caused by this measure.
The three Iraqi presidencies and the Supreme Judicial Council issued, for their part, a harsh statement, which is the strongest of its kind against uncontrolled weapons and the attempts of outlaws to declare war in place of the state. A presidential statement said that “the security developments that occurred in recent times, including the continued targeting of civilian and military centers and headquarters, and the continuing assassinations and kidnappings against civilian activists, represent a targeting of Iraq and its sovereignty.” The statement added that “the trend towards which the actions of outlaw groups are heading against the country’s security and sovereignty, represents a dangerous trend that exposes Iraq’s stability to real risks.”
In addition, the Iraqi National Security Adviser, Qassim Al-Araji, met yesterday (Monday) with the American ambassador in Baghdad Matthew Toller and British Ambassador Stephen Hickey, in an attempt by the Iraqi government to reassure the American and British sides about the Iraqi government’s ability to secure the protection of foreign diplomatic missions and to deal strongly. With outlaws. A statement issued by Al-Araji’s office said, “During the meeting, they discussed strengthening joint cooperation between Iraq and the United States of America in all fields, and ways to develop the growing relationship between Baghdad and Washington.” The US ambassador emphasized, according to the statement, “his country’s continued support for the Iraqi government in the areas of security, combating terrorism and helping to overcome current challenges.” In this context, Dr. Dhafer Al-Ani, a member of the Foreign Relations Committee in the Iraqi Parliament, told Asharq Al-Awsat that “the closure of the embassy will most likely be followed by punitive measures at the level of individuals and institutions,” noting that “the information I have is that Washington has prepared a list of forty names from The leaders of the armed factions will consider them targets, and financial and legal sanctions will be issued against them. ” He added, “With regard to Iraq, it will treat it in the same way that Tehran deals with economic blockade, financial and monetary tightening and political isolation, as well as cutting off forms of security and military cooperation.” Al-Ani explained that “the decision to close and boycott will be collective, as there are about 13 European diplomatic missions that will take the same position, in addition to a number of Arab countries,” stressing that “this means in the end that the entire political system will be questioned of its legitimacy, and thus the situation is open to All options ».
In the same context, the security and strategic expert, Fadel Abu Ragheef, told Asharq Al-Awsat that “it is not expected that the American embassy in Baghdad will be closed, just as I do not expect the existence of a threat like it was exaggerated in the media, as it is difficult for the United States to abandon this Simplicity for its strategic and market depth in the Middle East, which is Iraq ». Abu Ragheef added that “while it can be said that the escalation will continue, it is part of the propaganda despite the presence of messages that could have arrived, which are mostly personal to a large extent but have been leaked in a way that has confused the situation during the past three days.” Abu Ragheef explained that “the process of closing the embassy is excluded, but even if such a decision is taken, it does not mean cutting ties, directing sanctions, or even directing selective military strikes.”
In addition, the leader of the “National Coalition” and the former Prime Minister, Iyad Allawi, expressed his fear that Iraq would be affected by the set of conflicts raging in the region. Allawi said in a statement, that politicians and officials in Iraq must show more patience, wisdom and prudence, expressing his fear that “Iraqis will suffer harm as a result of ill-considered policies or decisions.”
He added, “In the east there are signs of war between Armenia and Azerbaijan, Iranian-American tension, as well as the faltering Palestinian peace process, the Turkish-Kurdish conflict and the Turkish-Greek and Turkish-Syrian tension in the north and west, in addition to the escalation in southern Iraq, which is never pleased.” Allawi continued: “We warn against the expansion of these conflicts and their impact on Iraq and its people,” calling for “the necessity of giving priority to the interests of the homeland, looking at the suffering of its children, and calling for dialogue of opposites, giving priority to interests and rejecting violence.”