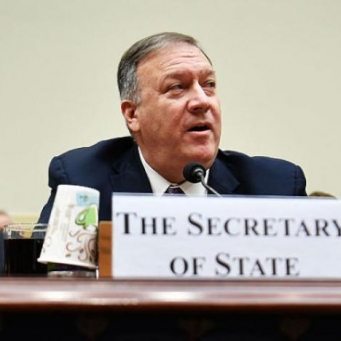 The United States affirmed its commitment to the results of the recent strategic dialogue with Iraq, via closed-circuit television, while expressing its support for the new Iraqi government, headed by Mustafa Al-Kazemi, who is expected to visit Washington soon, “if health conditions permit.”

And the Iraqi Foreign Ministry, in a statement yesterday, quoted US Secretary of State Mike Pompeo as saying during a telephone conversation with his Iraqi counterpart Fouad Hussein that “the United States is happy with the initial results of the strategic dialogue,” expressing his hope to continue for the purpose of completing these dialogues. The statement added that Pompeo “affirmed the US government’s respect for the sovereignty of Iraq, its support for the government of Mustafa Al-Kazemi, and the provision of economic support.”

The Iraqi Foreign Minister, Fouad Hussein, stressed that his country seeks to “build balanced relations with all countries of the world, and adopt the principle of non-interference in internal affairs, respect for the sovereignty of Iraq, realization of common interests, and independence of the Iraqi decision.” Turning to the upcoming visit of the Prime Minister to Washington, “if health conditions permit,” he stressed “the government’s insistence on taking future steps to work and proceeding with the success of its government program.”

The two sides agreed on the need to encourage investment in all sectors, including the oil sector and infrastructure, and to urge investors to work in Iraq. Last week, Iraq and the United States held a first round of strategic dialogue between the two countries.

Although many political forces welcome the initial results of the dialogue, especially the United States’ assertion of the importance of preserving Iraqi sovereignty, Washington’s announcement that its withdrawal from Baghdad is contingent on eliminating ISIS has led to negative reactions from parties near Iran.

In the same context, the Iraqi authorities are tightening the noose on the armed factions responsible for firing Katyusha rockets at the American embassy in the Green Zone, the Taji camp, or the vicinity of Baghdad airport, where the American soldiers are located. A security source told Asharq Al-Awsat that “intelligence has begun to come close to identifying the elements that carry out such actions that violate Iraqi sovereignty, through information obtained.”

The security source did not reveal any more details, but he stressed that “the coming period will witness access to the sources of those launching Katyusha rockets; Especially after the emergence of entities with different names, none of which belong to the well-known armed factions that adhere to the armistice, pending the results of the strategic dialogue, which aims in the end to guarantee the sovereignty of Iraq and the exit of American forces from Iraq within a clear road map.

To that, the first deputy speaker of the Iraqi parliament, Hassan Karim Al-Kaabi, called on political forces to “cooperate to preserve the sovereignty of Iraq and secure its airspace.” He said, in a statement, that he held a meeting with a number of chairmen and representatives of the parliamentary committees “to discuss the details of the Iraqi-American dialogue that started days ago, and to know the steps and principles on which the delegation relied on security, economic and other aspects.”

He added that «the meeting was dedicated to hosting the governmental negotiating team with the United States, headed by the Senior Undersecretary of the Ministry of Foreign Affairs Abdul Karim Hashem Mustafa, and the presence of Muhammad al-Haj Hammoud, and a number of other personalities, within the delegation. The present delegation emphasized that the round of discussions was good and successful and came in accordance with the relevant decisions of the legislative and executive branches.

Al-Kaabi revealed that the next round of dialogue with Washington will start next month, and “all ideas put forward by members of the House of Representatives will be taken into consideration.” He believed that “the issue of the withdrawal of American forces should be placed in the first priority of all future dialogues and joint agreements.”

The Iraqi political researcher Dr. Hussein Allawi assured to “Al-Sharq Al-Awsat” that “the strategic dialogue is very important for the two parties. The United States has sought through this dialogue to establish convictions, change convictions, and expand mutual understanding towards a map of action that begins with a tactical dialogue in several stages and ends with an agreement to activate the joint committees in The strategic agreement signed in 2008 ».

He added that “the focus in the current stage was on the strategic files that represent a priority, such as finance, higher education, defense, interior, central bank, oil and health.” He explained that “Al-Kazemi dealt with this dialogue accurately from the perspective of the forces supporting and opposing the forces of dialogue,” noting that “a series of future dialogues between the two parties will be discussed through joint work in more influential areas in Iraqi-American relations.”

He believed that “Al-Kazemi’s wisdom, calmness and the ability of his negotiating team resulted in achieving good results, which were not achieved by the forces of arms and the wrestling discourse between the various parties.”