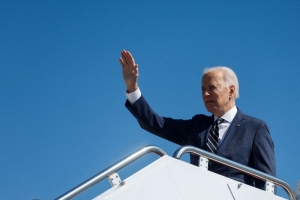 The Ukrainian war revealed the depth of loss in the administration of Joe Biden. The state of bankruptcy that American policy in the Middle East and the Gulf is suffering from is nothing but the result of many years of accumulation. For more than forty years, successive US administrations, in their dealings with Iran, committed, before others, all the mistakes that could be committed in the shortest period of time.

This was noted by Vladimir Putin, who took the risk of invading an independent state, Ukraine, in light of his discovery that America is no longer America on the one hand, and that its relations with the countries of the region are not of a fixed type as much as they are an expression of unparalleled political short-sightedness on the other. This confirms the American decision to withdraw from the region and content itself with watching from afar as the “Islamic Republic” pursues its expansion project, whether that is in Lebanon, Iraq, Syria or Yemen. America suddenly woke up to the importance of the Gulf after the rise in oil and gas prices. You did not find allies who could respond to what you asked. This is because no one in Washington understands that the relationship between allies is one of give and take and not one of imposing dictates when the American need arises.

The policy of confronting China has backfired on America itself, especially since the latter seems to be the first beneficiary of Putin’s adventure and that the Russian president will need it more than ever at this stage.

From the moment the Jimmy Carter administration did not respond to the Islamic Republic’s detention of 52 American diplomats who were in the Tehran embassy in November of 1979, there has been an American downward path. The positions of the Biden administration came to be directed by its inability to understand the Middle East and the Gulf to perpetuate this path. She did not understand the meaning of Iran’s free hand in the region, nor did she understand the meaning of the Russian intervention in Syria. Iranian militias and Russian forces have let the killing of thousands of Syrians mercilessly in order to ensure the survival of Bashar al-Assad and his minority regime in Damascus.

If the number of those who have been emigrated by Russia from Ukraine exceeded two million within two weeks, the number of Syrians who have migrated from their country or who have moved from one region to another inside Syria itself, has exceeded ten million since 2011. Iran, with direct Russian assistance since 2015, has changed, The nature of an Arab country is important… while America is in the observer’s seat. Sometimes she gets involved in a funny way and most of the time she just takes notes.

There is a very simple equation that the Biden administration and the Barack Obama administration did not understand. This equation is based on the fact that whoever possesses an iota of reason in the entire Arab region can only call for Arab-Iranian rapprochement… if its conditions are clear. In an interview he gave on these days in 2014 to one of the major media outlets (Bloomberg View), Obama did not hesitate to focus on the importance of Iran and its right to play a role at the regional and global levels. Who told him that Arabs in general, Sunnis, Shiites, Druze and Christians, object to such a rapprochement and to the Iranian role? Is the problem in the rapprochement or in the American naivety that limits the problem with Iran to the nuclear file, which Obama believed that it was possible to reach a deal in this regard… and he reached such a deal that served the “Islamic Republic” and its project.

At the root of the problem, which results in Vladimir Putin’s disdain for the United States, is a policy pursued by Washington based on refusing to be aware of Iranian aggression and then Russian aggression. With the exception of Donald Trump’s administration’s assassination of Qassem Soleimani, the commander of the “Quds Force” in the Iranian Revolutionary Guards, at the beginning of the year 2020, shortly after he left Baghdad airport, the United States, in its dealings with Iran, did not provide evidence that it had fangs that it could use when needed.

It has never responded to the bombing of the Marine headquarters near Beirut airport on October 23, nor to the bombing of the American embassy in Ain al-Mraiseh in April of that year. The United States withdrew militarily from Lebanon at the time. I left the country to Iran and the Syrian regime, up to what Lebanon is now. Lebanon soon turned an Iranian card, no more. Iran, and no one but Iran, has decided who is the Christian (Maronite) president of the republic in Lebanon…

◙ America suddenly woke up to the importance of the Gulf after the rise in oil and gas prices. You have not found allies who can respond to what you ask

The one who delivered Iraq on a silver platter to Iran in 2003 was the Republican administration of Bush Jr. The surrender of Iraq to the “Islamic Republic” led to an earthquake whose interactions still shake the whole region to this day. It is certain that Vladimir Putin was watching America and the American transformations, trying to take advantage of everything that was going on in the world. He no longer had any doubt that he was facing a bewildered and hesitant administration, given the manner in which it withdrew from Afghanistan last summer.

Regardless of whether the Russian president, who was surprised by the European reaction to the invasion of Ukraine, backs down or not, the question remains whether the United States will reconsider its policy in the region…or will it continue to appease Iran?

That is the big question that will impose itself in the next few months, with what this means from the need for an American exit from the Iranian complex and from the complex that terrorism is Arab, and indeed Sunni in particular. There is no difference between ISIS and what Iran’s militias are committing in Iraq, Syria, Yemen and even Lebanon. It is not known whether in Washington someone can read this reality with a new spirit or not…

While waiting for the answer to the big question, there is no doubt that the world has changed. The Ukraine war changed the world. She reiterated the importance of the Gulf region and the Middle East, which the Joe Biden administration tried to ignore on the grounds that the priority of confrontation with China. The policy of confronting China has reverted to America itself, especially since the latter seems to be the first beneficiary of Putin’s adventure and that the Russian president will need it more than ever at this stage… while the Gulf states have no interest in taking any hostile stance from Beijing!