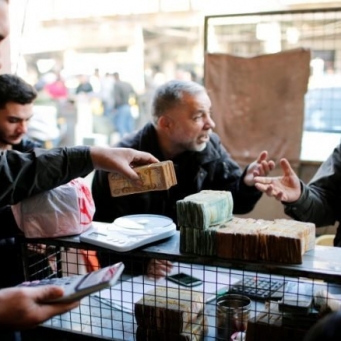 Last month, the Central Bank of Iraq reduced the exchange rate of the local currency (dinar) against the US dollar by 24 percent, saying that it was a decision that would push towards better management of payments and the economic crisis in the country.

Before partially liberalizing exchange rates, the dollar was equivalent in the local market to 1182 dinars for every one dollar.

Iraq depends for 95 percent of its income on oil revenues. The last time the dinar devalued was in December 2015, when it raised the selling price of the dollar to 1182 dinars, compared to 1166 dinars in the past.

The Central Bank believes that the continuation of the previous exchange rate “constitutes an obstacle to conducting development and enhancing the competitiveness of local production, while reducing the exchange rate will facilitate financing the budget to cover local needs, most notably the payment of salaries.”

However, the decision to reduce the price of the dinar will push for an increase in the prices of imported goods or local commodities whose production is imported raw materials, resulting in the exchange rate differences being charged to the final consumer.

This means that consumer prices (inflation) will record sharp increases during the coming months of this year, until the decision to partially liberalize the dinar is absorbed against the US dollar.

The inflation rate in Iraq reached 1 percent in October 2020, on an annual basis, according to the data of the Central Bank of Iraq, and it is expected to witness a remarkable rise after reducing the values ​​of the local currency.

But inflation will not be the end point for the consequences of lowering the price of the dinar, as higher prices will open the door to demands by the public and private sectors to increase wages, in order to confront the high prices in the local market.

In the event that the devaluation of the local currency is not accompanied by an increase in wages, the local community is faced with a forced transfer of groups from the middle class to the less fortunate, as a result of which poverty rates will increase.

The other issue is that the devaluation of the dinar has automatically eroded the savings of Iraqis in the local market, as the cost of converting savings into foreign currency will increase, which means a loss of savings by 24 percent.

The exchange of a deposit of one million Iraqi dinars is equivalent to the new exchange rates of 680 US dollars, compared with 847.5 dollars for the previous prices, which means that the new prices lost the deposit of 167.5 dollars.

During the fourth quarter of 2020, the central bank lost control of exchange rates, with the dinar declining to an average of 1,300 against the dollar, as a result of the emergence of chaos in the currency market.

In the early days of the partial liberalization decision, the demand for foreign exchange in the Iraqi market fell to unprecedented low levels, which is a positive indicator for preserving the abundance of dollars in banks.

Since the collapse of oil prices earlier last year, Iraq is facing an unprecedented liquidity crisis, the government of Prime Minister Mustafa Al-Kazemi has been forced to borrow from the bank’s reserves in dollars, to pay $ 5 billion a month, representing public sector salaries and pensions.

The Iraqi government has deliberately raised the price of the dollar against the Iraqi dinar, in order to provide large financial differences in the hope of achieving financial abundance for the state treasury.

Baghdad sells crude oil in the dollar currency, while its domestic expenditures are mostly in the dinar currency, as Baghdad believes that reducing the price of the dinar will achieve sufficient financial abundance to provide the monthly salary bill.