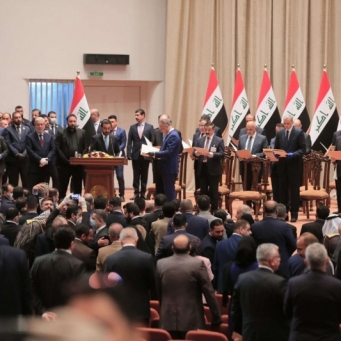 The Constitutional Amendments Committee in Iraq announced on Wednesday the completion of the procedure for amending articles in the constitution, most notably the reduction of the number of parliament members to 180.

“The tasks of the committee were completed by making amendments to some articles of the constitution, most notably reducing the number of parliament members from 329 to 180.”

“Article 76 has been amended, which stipulates that the candidate of the largest parliamentary bloc should be assigned to form a government, to the bloc that gets the highest votes in the elections without forming alliances within the parliament,” Al-Saadoun added.

He explained that “the committee decided to expand the powers of the Iraqi president, instead of converting the political system from parliamentary to presidential, because that requires many amendments.”

Over a year, the committee amended several controversial articles in the Iraqi constitution, which was approved in 2005 during the US occupation of the country.

According to the Iraqi constitution, the amendments are to be sent to parliament for discussion and voting, then a popular referendum, and if the majority of voters in three governorates (out of a total of 18) object, they are rejected.

And in October 2019, the Iraqi presidency decided to form a committee to amend the constitution in preparation for holding legislative elections, against the background of the escalation of mass popular protests across the country.

The Iraqi Council of Ministers decided Tuesday to postpone the general elections from June to the tenth of next October.

A government statement quoted Prime Minister Mustafa Al-Kazemi as saying that the decision to postpone was taken to give the Electoral Commission sufficient time to fully prepare for holding fair and transparent elections.

The postponement of the electoral elections sparked widespread criticism among social media activists, who considered it a retreat from Al-Kazemi from his most important promises, considering that the government was primarily formed in order to manage a transitional phase that would lead Iraq to early elections.

They pointed out that Al-Kazemi’s government was subject to pressure from political forces, most of which do not want early elections.

Activist Sarah Ben Aishouba said in a tweet on Twitter, “The Election Commission, after hints in the past period, proposes to postpone early elections to October instead of June … the parties’ fear of the street and their reluctance to submit coalition lists were a reason for the postponement (even if the official text of the document differed). ”

Iraqi journalist Walid Ibrahim commented about the postponement decision, saying, “Postponing the parliamentary elections in Iraq until October, which emptied them of their content as early. The postponement was not technical, as the elections commission tried to justify. Rather, it is a political par excellence, and it was agreed upon months ago.

In Fawaz, a professor specializing in political science, he considered that postponing the date of the Iraqi elections “is behind the desire of the influential blocs to tighten their grip on their results and to prevent any radical shift in the miserable political scene.”

At a time when the positions of the political blocs differ from the decision to postpone, the leader of the Sadrist movement, Muqtada al-Sadr, called on everyone to show the patriotic spirit and work to make the elections succeed and complete them in the most beautiful way, far from clashes, saying in a tweet on Twitter that “he will not allow it to be postponed again.” .
Al-Sadr renewed his warning “against the corrupt’s manipulation and conspiracies, whether with regard to the election law or interference in the work of the commission.”