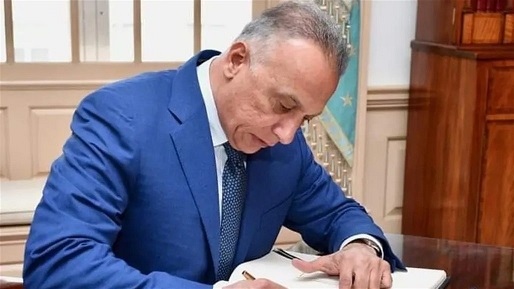 The British Middle East Monitor considered that the repeated security failures of the Iraqi Prime Minister Mustafa Al-Kazemi should lead to his expulsion and his presentation to trial due to his failure to fulfill the promises and duties placed on him.

A report by the newspaper stated, “The Iraqi government’s statements help us point the finger of accusation at it. Just one hour after the bombings of Tayaran Square in the heart of the Iraqi capital, a security official stood in front of the cameras in the square and said that the explosion was carried out by two suicide bombers, probably from ISIS. This was said without any investigation, gathering evidence, or closing the site to prevent contamination of evidence or trampling the remains of victims scattered around the field.

He added, “And at an amazing speed a team of cleaning workers arrived and cleaned the floor as it had not been cleaned before. Instead of waiting for the investigation team to arrive, the square was washed and cleaned of the blood and parts of the victims ’bodies mixed with the remains of suicide bombers, without leaving any physical or forensic evidence for the police and security services to comb it, as they do in the rest of the world, in order to help identify the perpetrators.

He continued, “The prime minister described the massacre as an accident, so how could anyone describe the killing of 32 people and the wounding of 110 at the hands of suicide bombers as an” accident “? This is the language of the occupier whose crimes, violations and systematic killing of Iraqis have long been described as “accidents.”

And he continued, “Al-Kazemi did not stop there, as he used language aimed at reassuring the United States in the“ war on terror ”and creating an unstable situation that certainly calls for foreign intervention when he said that the battle against terrorism is continuous and long-term, and that he will not back down or stop engaging in it. “.

The report indicated that “it is important to document and record Al-Kazemi’s statements and allegations, especially in which he declares his responsibility before the people as“ the Prime Minister and Commander of the Armed Forces, ”as well as his continuous failure to fulfill his promises and duties. Among the most important of these duties is to protect the security of citizens, implement the law, achieve justice and economic and political stability, and that it is the duty of independent media, human rights workers and national parties to consider it a failed and unreliable government, and this justifies the dismissal of Al-Kazemi and his trial for failing to perform his duties while continuing to protect criminals from accountability. “.