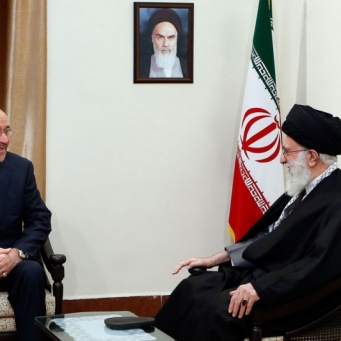 Political sources in Baghdad said that the efforts of the leader of the State of Law Coalition, Nuri al-Maliki, to mobilize Iranian support to approve the single-district formula in each governorate within the election law, failed, in light of the Shiite leader Muqtada al-Sadr and the Sunni political forces’ adherence to the multi-district formula within the same governorate, which was previously Parliament has approved its general framework, without detailed schedules.

Parliament approved this amendment under pressure from mass demonstrations that lasted for several months, during which hundreds of people were killed and thousands were wounded by the fire of pro-Iranian militias that intervened to protect the Iraqi regime, which represents religious parties.

Al-Maliki traveled to Iran last week in a way that raised controversy and put many question marks on the political behavior of the leader of the State of Law coalition and his intentions in the next stage.

Political sources in Baghdad said that the election clause and its law was among the priorities of Maliki’s visit to Iran, pointing out that the efforts of the leader of the State of Law coalition in this area were not successful.

The sources indicate that the Iranians refused to give al-Maliki a promise that they would intervene in Iraq to restore work in a formula that considers the province as one circle.

Observers say that Iran does not want more of the Iraqi street feeling – particularly the Shiite part of it – of anger towards it, after the October 2019 demonstrations revealed the extent of the significant decline in its popularity in this neighboring country.

Al-Maliki – who is the prime minister of Iraq for two terms between 2006 and 2014 – is the biggest beneficiary of the electoral laws during the previous polls, as they were always built according to the measurements of his political project, so he achieved unrealistic results in the 2010 and 2014 elections, before he received a big shock in the 2018 elections, During which he lost nearly two-thirds of his seats due to the adoption of new polling rules.

For months, al-Maliki has moved to avoid a repeat of his loss during the next general elections. But the mass demonstrations, which demanded a fair election law guaranteeing multiple districts within a single governorate, thwarted his efforts.

Al-Maliki realizes that the multiplicity of constituencies within one governorate will eliminate his hopes of returning to the forefront of the political scene from the gate of the next parliament, because his audience is distributed among the various southern governorates, and it needs to gather during the poll in order to be useful at the mathematical level, unlike Al-Sadr who has in all Conservation of enough public to win the number of seats planned.

The Sunnis adhere to the multi-district formula that matches the demands of the protesters, because it is capable of increasing the number of seats that will be won by the forces of the Sunni component in the upcoming elections, especially in the provinces where Shiites constitute the majority of the population.

The team close to Maliki says that the Iraqi parliament approved the new amendments to the election law under street pressure after a political agreement to absorb the first wave of demonstrations, without real intentions to adopt them during the polls.

However, Parliament Speaker Muhammad al-Halbousi has been reiterating, for weeks, not to retreat from the multi-district formula in each governorate, calling on the objectors to challenge the law through the judiciary.

Despite the pragmatism of Al-Maliki’s position and his endeavor to preserve his political interests that he places above all considerations, including those of the country, his objections are based on technical and legal facts that cannot be overlooked.

The multi-district formula requires that the boundaries between the districts and sub-districts of each governorate be clear and fixed, which is not the case in Iraq. Rather, the differences reach the borders of the governorates themselves and their relations between each other. For example, there are conflicts between Arabs and Kurds over many areas in the north of the country, while Shiites and Sunnis are fighting over the borders of other provinces in southwestern Iraq.

The Ministry of Planning is unable to provide final lists of the names of districts and sub-districts for all regions of Iraq, due to the perceptions of the political forces crossing the borders and others.

Observers say that applying the constituency formula for each seat is almost impossible in light of the existing complications, and may hinder the holding of elections in the first place. Therefore, there is talk about a “compromise” that guarantees multiple districts in each governorate, without requiring that one district be defined for each seat.

Law experts and political advisers representing various forces and independent organizations with the support of the United Nations are studying the best options for the upcoming electoral process.

The Electoral Commission says that it may not be able to hold the polling at the date set by the government – which is June 1, 2021 – unless the controversy over the election law is settled quickly.