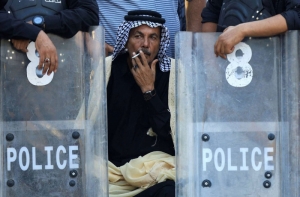 The leader of the State of Law coalition, Nuri al-Maliki, is working to put obstacles in the way of any steps that lead to early legislative elections, and in this he does not hesitate to block any attempts from within the coordinating framework to meet the leader of the Sadrist movement Muqtada al-Sadr in the middle.

BAGHDAD – The political momentum in Iraq has receded over an initiative to hold a meeting between representatives of the Coordination Framework, the Kurdistan Democratic Party, the Sunni Sovereignty Coalition, and the leader of the Sadrist movement, Muqtada al-Sadr, to agree on the details of a transitional phase that paves the way for early legislative elections.

Iraqi political circles say that the team led by the leader of the State of Law coalition, former Prime Minister Nuri al-Maliki, succeeded in obstructing the efforts to hold this four-way summit, which was supposed to take place in the Hanana area of ​​Najaf governorate in the south of the country.

The circles clarified that Al-Maliki strongly opposes going to early elections, fearing that he would suffer a severe loss that would take him out of the circle of influence in the Iraqi equation. He had achieved a remarkable victory in the last elections, but it is unlikely that this will happen again in light of the criticisms that are chasing him in the Sunni provinces.

The leader of the Al-Fateh Alliance, Hadi Al-Amiri, had hoped to withdraw the nomination of the former Sudanese minister as a “goodwill gesture” presented by the framework to Al-Sadr to ensure the success of the chances of holding the meeting and reaching a settlement that ends the current political impasse.

Political circles say that al-Maliki’s adherence to al-Sudani does not come out of keenness to nominate the latter, but rather to abort any chance of a settlement with the leader of the Sadrist movement, as the former prime minister realizes that the latter will absolutely not accept meeting the coordination framework in the middle as long as al-Sudani remains the candidate for prime minister.

Al-Maliki’s efforts were not limited to mobilizing support within the framework for the Sudanese, but rather he instructed the latter to move in order to promote his electoral program to the parliamentary blocs, some of which found themselves in great embarrassment after meeting the framework’s candidate for prime minister, similar to the extension movement emanating from the “October Revolution.”

The extension movement was forced to dismiss its deputy, Hamid Al-Shiblawi, against the background of the uproar that his presence aroused in a meeting of the Sudanese MPs in the Iraqi parliament.

Last Thursday, protesters attacked the office of the extension movement in the city of Nasiriyah, the capital of Dhi Qar governorate. According to videos widely circulated on social media, the angry protesters took out the contents of the office and set it on fire, after writing on the walls inside the office building the phrase “an extension that does not represent Tishreen.”

Some of the participants in the protest movement sent a message to the Secretary-General of the movement, Alaa Al-Rikabi, “You are the one who brought these parliamentarians representing the October protests and the Iraqi people, but they are traitors. You must repudiate them because part of them turned out to be with the coordinating framework, and the other part is with the Sadrist movement.”

The participants added, “Anyone who is a thief and climber on the shoulders of the people and the October protests, we disavow him.” The protesters addressed Al-Rikabi, saying, “You must disavow MP Hamid Al-Shiblawy.”

Observers say that the reactions recorded on the participation of a deputy in an extension in a meeting of Al-Sudani would affect the efforts of the team led by Al-Maliki to gain the support of the parliamentary blocs, and impose arrangements for the next stage to investigate the chest permanently, as these blocs will think more than once before proceeding with this option which will cost her supporters.

Observers point out that al-Maliki’s attempts to miss the opportunity for the success of the initiative, which is supported by part of the coordination framework and which is based on meeting al-Sadr in the middle, would prolong the stalemate in Iraq, which does not serve any of the parties.

And Iraqi Prime Minister Mustafa Al-Kazemi said Friday that he will call for a third round of national dialogue, to resolve the political crisis in the country.

This came in an interview with Al-Iraqiya News Channel (official), on the sidelines of his participation in the 77th United Nations General Assembly, held in New York. “I will call for a third round of national dialogue to solve our problems, and we have no way but dialogue,” Al-Kazemi said.

Al-Kazemi called on “all parties that have differences with him to liquidate them away from the interests of the people.”

The situation worsened after al-Sadr’s decision to withdraw from the political process last June and his choice of escalation in the street, which almost led the country to a civil war.

On the fifth of September, the second session of the National Dialogue, which was boycotted by the Sadrist movement, ended with the formation of a “technical team” of political forces to discuss views in order to reach early elections.

Disagreements between the Sadrist movement (Shiite) and the Coordinating Framework (a Shiite close to Iran) have prevented the formation of a government since the last legislative elections were held on the tenth of last October.

The situation worsened after al-Sadr’s decision to withdraw from the political process last June and his choice of escalation in the street, which almost led the country to a civil war.

Followers say that the problem in Iraq is that there are two teams represented in Al-Sadr and Al-Maliki, neither of them refuses to give up, noting that Al-Kazemi’s call to hold a new dialogue session will not bear fruit as long as the Sadrist movement boycotts it, and Al-Maliki’s refusal to allow the rest of the forces to persuade the movement to a logical settlement that leads To complete the constitutional dues, and to pave the way for new elections, does not facilitate the efforts of a solution.

On Wednesday, the Kurdistan Democratic Party stressed the need for a dialogue with the Sadrist movement to hold a session of the House of Representatives, pointing to the weight of the movement inside and outside the parliament.

The party’s deputy, Sabah Sobhi, told the local “Shafaq News” agency, that the Kurdistan Democratic Party insisted on the basic idea that any session of the House of Representatives needs a dialogue with the Sadrist movement.

He pointed out that the resumption of the sessions of the House of Representatives requires political stability and agreement with the Sadrist movement, pointing out that the Sadrists used to make up 73 seats and have a great and strong weight, both inside and outside Parliament.

He stressed that there is no specific date for the sessions of the House of Representatives, adding, “We hope that a political agreement will be reached in order to develop a road map and to resume the parliament’s sessions.”

And the Iraqi parliament has been suspended since last August.