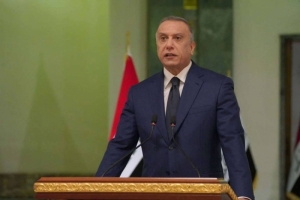 The Sadrist movement seeks to drag Iraqi Prime Minister Mustafa Al-Kazemi into the ongoing confrontation between him and the coordinating framework, especially after he lost the street card he was betting on to turn the table on the opponents. Political circles and observers believe that Al-Kazemi is unlikely to respond to what the current wants, as he realizes that he will be the most affected.

BAGHDAD – Iraqi political circles say that the leader of the Sadrist movement, Muqtada al-Sadr, is seeking to drag Iraqi Prime Minister Mustafa al-Kazemi to his square, and push him to leave the neutrality area in which the latter has sought over the past months to seek shelter, in light of his awareness of the complexities of the political crisis and the danger of aligning with this or that party. .

The circles clarify that Al-Sadr’s demand to Al-Kazemi, also by virtue of his position as commander in chief of the Iraqi armed forces, to dissolve a number of militias and dismiss the head of the Popular Mobilization Authority, Faleh Al-Fayyad, is an attempt to push the prime minister to the front of the raging crisis between him and the coordination framework, which almost caused the last two of the civil war.

The political circles themselves rule out the possibility of Al-Kazemi being dragged into this path, as he realizes that he will be the weakest link, especially as he has been subjected for months to a campaign by forces in the coordinating framework that accuse him of submitting to what the Sadrist movement wants.

The leader of the Sadrist movement no longer has many cards in the face of the coordination framework, after he practically lost the street card

On Thursday, Saleh Muhammad al-Iraqi, known as “Minister al-Sadr,” called on the prime minister to disband some militias, in what appeared to be a reference to Asa’ib Ahl al-Haq and the Abu Ali Brigades, as well as the dismissal of the head of the Popular Mobilization Authority, Faleh al-Fayyad.

Al-Iraqi said, in a tweet via his Twitter account, “We suggest to the respected commander of the armed forces, the following: In order to preserve the prestige of the state, end the presence of militias in sensitive places in the state, and change the PMF official (Faleh Al-Fayyad) for the following reasons.”

He explained, “He is a partisan (Faleh al-Fayyad) and the head of a bloc, and this is what politicizes the Mujahideen crowd, and he does not possess a strong personality and even does not possess a military mentality, and in general, he is not qualified for this position.”

Al-Iraqi continued, “Issuing a firm and strict order to dissolve the factions claiming resistance while killing the people, removing all the factions and even the popular crowd from the Green Zone, and holding them by the heroic national security forces.”

He considered that the fact that the factions and the mobilization remained “incurs a security risk for the same commander of the armed forces, as well as for the rest of the institutions, especially the judiciary and pressure on him.”

Al-Iraqi called for “the removal of the popular crowd from border controls and crossings in order to preserve the reputation of the good mujahideen, as there are those who deliberately distort their reputation through the use of violence, trade, smuggling and so on.”

Iraq has been witnessing for months a political crisis between the Sadrist movement on the one hand, and the coordination framework on the other hand, which intensified last July when the movement mobilized its supporters and staged a sit-in in front of the parliament headquarters in the “highly fortified” Green Zone in the capital, Baghdad.

This crisis took a dangerous turn last Monday, when Sadr’s supporters stormed the government building inside the Green Zone after their leader announced his “retirement” from politics.

These repercussions led to confrontations between armed elements belonging to the current and militias affiliated with the Popular Mobilization and loyal to the coordination framework, which resulted in dozens of deaths and hundreds of injuries, most of them loyal to al-Sadr. Al-Sadr issued an order the next day for his supporters to leave the Green Zone, reflecting the latter’s exposure to a campaign of intense pressure from Iran.

Despite the withdrawal of the Sadrist movement’s supporters, the atmosphere remained charged, as armed clashes erupted on Thursday evening in the Basra Governorate in southern Iraq, between members of the Asa’ib Ahl al-Haq movement led by Qais al-Khazali and Saraya al-Salam affiliated with the leader of the Sadrist movement, and ended with the killing of four people on both sides, before they could The security forces imposed their control.

In the midst of this tense situation, which is still open to various scenarios, the Iraqi Prime Minister was keen to remain neutral, and did not issue any decisions to the security forces that are subject to his orders to act in the face of what he later called the “uncontrolled arms conflict.”

Observers believe that several considerations prompted Al-Kazemi to refrain from moving, including his lack of confidence in the ability of the security forces to confront the militias that have high combat capabilities and are well armed, in addition to the fact that the security services under his command are themselves divided loyalties between this side and that, Therefore, any order issued by him will deepen the crisis and lead to fueling the fighting.

Observers point out that one of the other reasons that made Al-Kazemi adhere to the logic of neutrality is that he does not enjoy political cover, and therefore he will be subject to an unequal confrontation with the rest of the parties.

Over the past months, Al-Kazemi has been subjected to severe criticism, especially from the leader of the State of Law coalition, former Prime Minister Nuri al-Maliki, and the leader of Asa’ib Ahl al-Haq, Qais al-Khazali, because of what they consider negative behavior by the Prime Minister regarding the escalation of al-Sadr, including the one that targeted the Supreme Council a few days ago. to eliminate.

Observers believe that al-Sadr was the main beneficiary during the last period from the Iraqi prime minister’s support for the square of neutrality, but today he is asking him to leave that square and line up with him, and why is the front not issued? Especially since the leader of the Sadrist movement no longer has many cards in the confrontation with the coordination framework, after he practically lost the street card.

Observers indicate that it is unlikely that Al-Kazemi will respond to Al-Sadr’s demands, which, although they intersect with his positions and convictions, as he has always announced his rejection of the uncontrolled weapons in Iraq, but he realizes that the opposite side, i.e. the coordinating framework, will read such a response as a declaration of alignment behind the current, This is what Al-Kazemi does not want.

Observers say that if pressure on the prime minister increases, he will then prefer to implement his threat to announce the vacancy of the position, rather than be an explicit party to the crisis.

Following the bloody events of the Green Zone, the Iraqi Prime Minister threatened to submit his resignation if he “continues to stir up chaos, conflict and rivalry” in the country, and confirmed the opening of an investigation to determine those who opened fire on the demonstrators and those who fired missiles at the Green Zone.

In a televised speech addressed to the Iraqi people, Al-Kazemi said on Tuesday evening, “We formed an investigation committee to determine those responsible for placing weapons in the hands of those who opened fire on the demonstrators and shed blood, despite the strict directives we issued to prevent the use of bullets.”

One of the reasons that made Al-Kazemi adhere to the logic of neutrality is that he does not have political cover, and therefore he will be subject to an unequal confrontation with the rest of the parties.

He continued, “It must also be determined who opened fire, missiles and mortars on the government area (the Green Zone in central Baghdad) throughout the night.”

According to medical sources, the clashes that erupted in the Green Zone have left at least 23 dead and 380 wounded.

Al-Kazemi said, “Enough of the duplicity of state and non-state, and the official security system must link all of them with all their orientations, and there is no difference between this and that immediately with the Commander-in-Chief of the Armed Forces (the Prime Minister), and everyone who is undisciplined bears legal responsibility.”

And he added, “I served my people with honor and honesty, and I was never a party or part of the problem, and I was patient with all kinds of abuse, obstruction and war declared by all parties to weaken the state and its decision, blackmail it, or reduce everything that was achieved for electoral goals.”

He added, “In spite of this, I have not and will not abandon my responsibility before my people and any option that serves Iraq’s interests and security and achieves political agreement between the various forces, and I was and still am with the principle of peaceful transfer of power.”

He added, “If they want to continue to stir up chaos, conflict, discord and animosity and not listen to the voice of reason, I will take my moral and patriotic steps to announce the vacancy of the position at the appropriate time, according to Article 81 of the Constitution, and hold them accountable before the Iraqis and before history.”

This article stipulates that the President of the Republic takes the place of the Prime Minister when the position becomes vacant for any reason, and assigns another candidate to form a government within a period not exceeding 15 days.