Al-Sadr is looking forward to the end of the forty-day deadline, hoping to score points in the opponents’ basket

Al-Sadr is looking forward to the end of the forty-day deadline, hoping to score points in the opponents’ basket 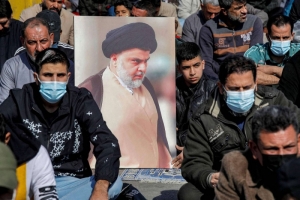 The political crisis in Iraq is in place, in light of the inability of the coordinating framework forces to achieve any breakthrough, as a result of the negative withdrawal of the Sadrist movement and its allies, amid talk of new scenarios, including re-floating the Al-Kazemi government, but this option faces constitutional and political obstacles.

Baghdad – Two weeks have passed since the coordination framework took over the helm of the negotiating process to resolve the political crisis that has afflicted Iraq for nearly seven months, but it has not achieved any breakthrough so far, due to the hardening of the positions of the Triple Alliance led by the Sadrist movement.

Iraqi political circles say that the failure of the coordination framework efforts was expected, as no progress can be made as long as the Sadrist movement refuses to deal positively with the political settlement efforts, noting that the movement appears to be haunted by the idea of ​​scoring points in the framework basket, without paying attention to the damage inflicted on the Iraqis from The crisis continues.

The circles clarified that the leader of the Sadrist movement, Muqtada al-Sadr, when he suddenly withdrew from managing the negotiations for the election of a president of the republic and the formation of the government, throwing the ball in the court of what he calls the “blocking third” coalition, giving him a deadline of forty days. He was looking forward to the latter’s failure, to obtain moral compensation for the setbacks that He was exposed to it as a result of the failure of the framework for his political project.

Hakim Al-Zamili: Al-Kazemi’s government is authorized to send the budget bill
, and Al-Sadr and his allies, the Sunni Sovereignty Coalition and the Kurdistan Democratic Party, failed in two parliamentary sessions to secure a quorum to choose a president of the republic, as a result of boycotting the coordination framework and a number of political forces, including the Patriotic Union of Kurdistan.

The trio is currently looking forward to the end of the deadline given by Al-Sadr to the framework to settle the crisis, to return the ball to them, which keeps the crisis in the same vicious circle.

The “Coordination Framework” coalition in Iraq announced on Tuesday that it rejected the deadline set by al-Sadr regarding the selection of a president for the republic and the formation of the new government in the country.

A statement by the coalition stated that “it did not seek, nor did it ask for unilateral power, nor did it work to alienate others. Rather, it was keen to cooperate with them, and therefore it is not concerned with setting time periods that will result in nothing but a prolongation of the political blockage.”

The forces of the “coordinating framework” are pushing al-Sadr to accept their participation in the next government, based on the consensus of all winners, according to the custom followed for years and known as “sectarian quotas,” but al-Sadr rejects this proposal and insists on excluding the political process with the participation of his Sunni and Kurdish allies.

Observers say that Al-Sadr, by putting a specific time limit on the framework, bypassing the constitutional deadlines, and also by declaring a negative regression, is in fact not wanting a settlement of the crisis, but rather seeks to show that he is the strongest party in the current equation.

On Monday, the Sadrist movement announced its silence about the movement of the coordination framework within the deadline given by al-Sadr.

Observers point out that Iraq is the main victim of the political impasse, and that returning the ball to the Sadrist movement’s court after the framework has exhausted its efforts, will not achieve anything new. Therefore, the closest scenario, which seems more realistic, is to go for the option of dissolving parliament and holding new elections.

Al-Sadr, by putting a specific time limit on the framework, does not want a settlement of the crisis, but seeks to show that he is the strongest party in the current equation.

Observers point out that there are those who are talking today about the option of keeping Mustafa Al-Kazemi’s government, with a comprehensive cabinet reshuffle and giving it the powers to make decisions in major files such as the federal budget, but this proposition is not easy to pass since Al-Kazemi’s government is currently a caretaker government, and it is not It can be preserved constitutionally only by renewing confidence in it in Parliament.

This requires an agreement between the parties, and this does not seem likely now. Hakim Al-Zamili, First Deputy Speaker of the House of Representatives, announced on Tuesday that the House will vote to authorize the caretaker government to send the budget bill for 2022. This came while presiding over a meeting held by the Parliamentary Finance Committee, in the presence of its Chairman, Hassan Al-Kaabi and all of its members, to discuss the provisions of the “Emergency Support for Food Security and Development Law” “.

The statement quoted al-Zamili, who belongs to the Sadrist movement, as saying that “the Council will vote to authorize the caretaker government to send the draft budget law for the current year, as well as important laws that affect the citizens’ need to the House of Representatives.”

The Coordination Framework Forces have not announced any position so far regarding granting the Al-Kazemi government a mandate to consider important and urgent issues, but observers see that the issue appears urgent, as files such as the budget cannot wait for the crisis to end, which may extend for additional months.