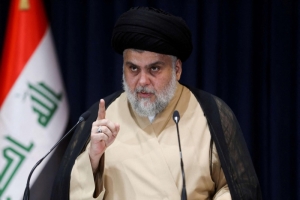 BAGHDAD – The leader of the Sadrist movement in Iraq, Muqtada al-Sadr, suddenly called on Thursday evening the forces of the Shiite coordination framework and their allies, who make up the blocking third in the Iraqi parliament, to form a national majority government without the Sadrist bloc.
Al-Sadr said in a tweet to him on his personal account on the social networking site on Twitter, “In order for Iraq not to remain without a government and to deteriorate the security, economic and service conditions, this is how I gave the blocking third an opportunity to negotiate with all the blocs without exception to form a national majority government without the Sadrist bloc, starting from the first of the month. The blessed month of Ramadan until the ninth of Shawwal.
He called on the Sadrist bloc to “not interfere with this, either positively or negatively.”
Muqtada al-Sadr’s new position contradicts another statement he issued on Wednesday, in which he refused to agree with the coordination framework, saying, “He prefers political obstruction to agreement with them.
Al-Sadr had won first place in the results of the Iraqi parliamentary elections that took place in Iraq on October 10, 2021, with 73 seats, surpassing all competing Shiite blocs.
Al-Sadr led an alliance that included the Sadrist bloc and the Sovereignty bloc led by Muhammad al-Halbousi and the Kurdistan Democratic Party led by Massoud Barzani to form the most numerous bloc in parliament to form a national majority government, which angered the Shiite currents that make up the Shiite coordination framework.
Al-Sadr said in his tweet, “These alliances bothered a lot. The chest mass, from the first day of the month of Ramadan to the ninth of the holy month of Shawwal.
The Iranian-backed coordination framework obstructed three parliamentary sessions dedicated to electing the president during the past few months, as it boycotted sessions that require the attendance of at least two-thirds of the members, given that it is the number required to elect the president.
By obstructing the holding of sessions, the coordination framework sought to push the Sadrist movement to rethink its exclusion from the government and work to involve it on the basis of quotas, while Muqtada al-Sadr insisted on forming a government “with a national majority far from sectarian.”
And on Wednesday, the Iraqi parliament failed to hold a session to elect a new president for Iraq for the next four years after the absence of a large number of deputies from the session.
59 candidates are competing for the position of President of Iraq, most notably the Patriotic Union of Kurdistan (PUK) candidate Barham Salih, who is supported by the Coordinating Framework, and the Kurdistan Democratic Party candidate, Reber Ahmed, who is supported by the Sadrist movement and its allies.